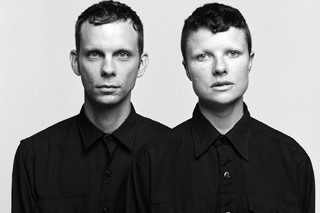 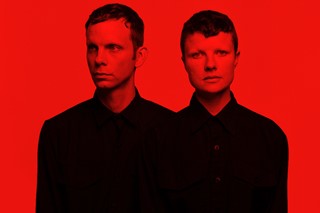 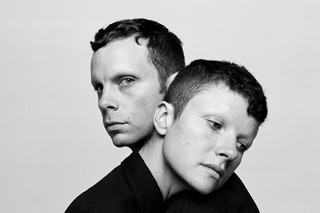 Hecuba has been in hiding, diligently working on their second album 'Modern' in a studio they set up outside Los Angeles. After posting an eerie, yet intimate "making of" documentary online, fans have learned that Modern takes a deeply emotional turn into the territory of separation, loss, and union. In many ways, it details the line between losing yourself in another and losing yourself completely. In the midst of it all, they've launched an imprint label, Germ, and have some exciting tour plans on the way.

Our only measure for including a track on the record, or even an instrument or sound, was if it fulfilled an emotional purpose

Dazed caught up with them to talk about all of the above, including the importance of materialising one's vision and how difficult this project truly was.

Dazed Digital: You launched your imprint label, Germ, recently. What was the motivation behind starting your own entity?
Hecuba: Part of it was to offer a counterpoint to the kind of throw-away culture that has become unfortunately common. We wanted to create a place with a certain level of quality and integrity in every aspect, from music and production to visuals and album artwork. Germ becomes a framing device for the artists and projects that we love, and for uncompromising and exciting artists who don't necessarily fit anywhere else. We want Germ to be about nurturing works that have real endurance and vitality.

DD: Your new album Modern is coming out May 9. How do you feel the sound has progressed since Paradise?
Hecuba: For us, Paradise was the embodiment of a mass idea: the idea of the West and the vision of a paradise that is either just past the horizon or is willed into existence out of thin air. It’s about the land of dreams and the desire to materialise your visions. We wrote, performed, recorded, produced, and mixed everything ourselves, but more than that, it is a reflection of the singularity that we tried to bring to making the record and our places in that process.

Our only measure for including a track on the record, even an instrument or sound, was if it fulfilled an emotional purpose. The result was a more direct approach to songwriting, while always making sure that the wilder, more out of control elements continually broke the order of a song delivered straight as an arrow.

DD: What specific emotions you draw out on the album? Can becoming one with another person be terrifying as well as exciting? The "making of" documentary alludes to the idea of "getting too close" when creating or performing something.
Hecuba: Yes. We found that locking ourselves into this process and trying to approach it as one entity rather than two separate people created a sense of heightened emotion all around. The writing is a very intense and emotional thing, as well as the performance aspects of making a record, but it also became a kind of emotional boiling pot that we found ourselves in. We had to resolve everything in the music and with each other without resorting to leaving it be.

While the intensity of the darker places we discovered was surprising, the biggest surprise was also the level of joy that we were able to find in the process and in relying on each other to find our way to a resolution (both musically and personally). However, there is something absolutely necessary about being distinct and separate from the person you are with. When that goes away, it’s almost like there’s no one there to love. And the things you do to yourself, you do to them. That’s not always good, but sometimes it's great.

DD: Having toured with Bat for Lashes, Devendra Banhart, Lucky Drags, and others (who are also fans of yours), what's next on the tour front once the album comes out?
Hecuba: We are currently setting up Germ residencies in several US and European cities with our label mates and Germ co-founders, Dreamers (as well as others). Instead of traditional touring, we are opting for a more regional approach that allows us to do a different kind of show. We are also in production on several films to accompany the record. More coming soon...

Modern is out May 9th on Germ