Taken from the winter 2022 issue of Dazed. You can buy a copy of our latest issue here

On a sunny Sunday evening in Freetown, the Salone Flying Stars are gathered on Aberdeen beach for their regular weekend practice. Unlike on other days, the sand is coated in thick layers of seaweed washed ashore from the ocean. On weekends, the beach is typically bustling with walkers, joggers, footballers, volleyball players and people doing yoga exercises, but normal services have been cut short today as the blanket of seaweed continues to spread thick.

‘It’s all love’: Mutya, Keisha and Siobhán on 25 years of the SugababesHaving set Glastonbury and Margate Pride alight, Mutya Buena, Keisha Buchanan and Siobhán Donaghy are now preparing for their first UK headline tour in two decades – here, they discuss their journey and weigh in on the decline of the girlband
Salone Flying Stars – Winter 202212 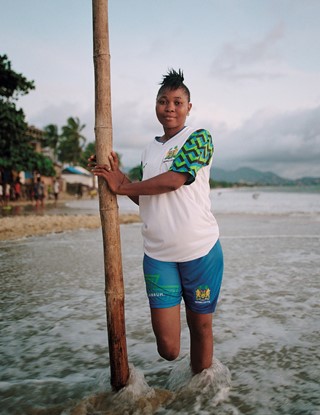 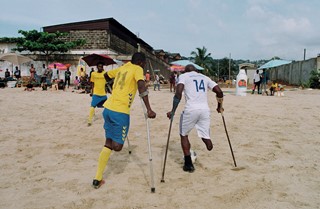 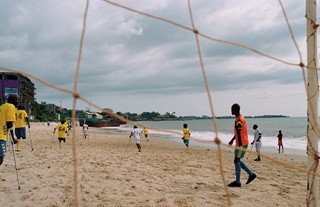 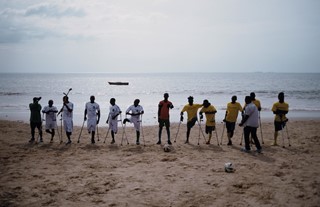 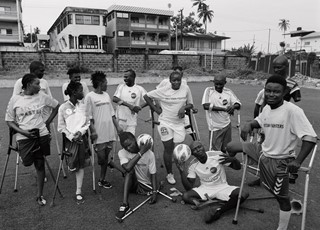 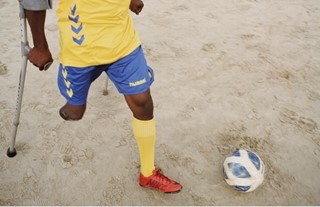 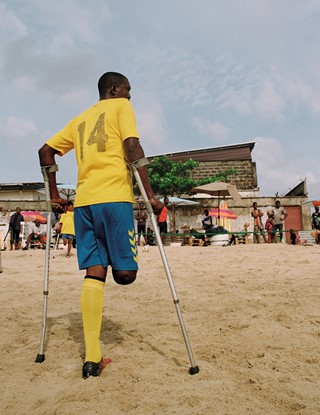 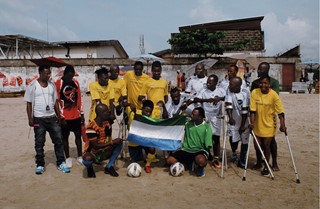 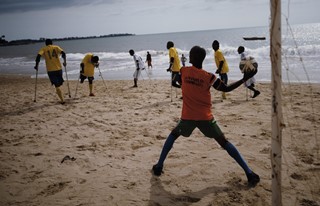 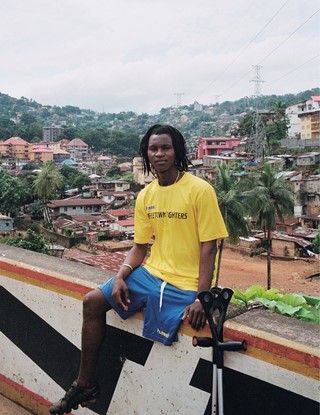 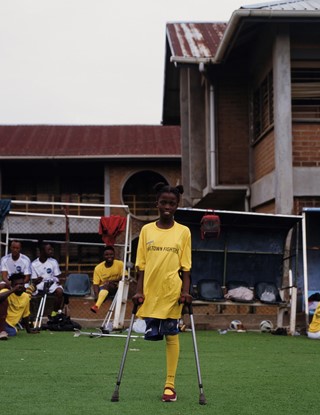 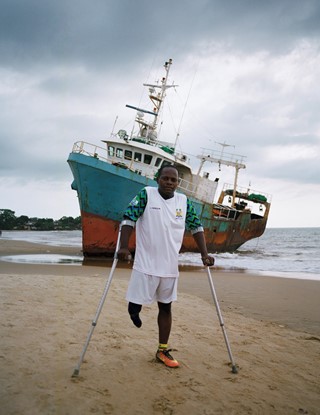 That is until the Flying Stars arrive, determined not to let a plague of algae get in their way. Using just crutches, Sierra Leone’s only amputee football team begin clearing parts of the beach and in about ten minutes, they make enough space on the white sand to allow them to play a game of six-a-side.

Founded in 2000, the group was created for victims of the west African nation’s brutal 11-year civil war. Over the years, the team has comprised dozens of amputees from across the country, offering a space for kinship and shared trauma. “Most people think the amputee football team is just about playing football – it is not,” says Mohamed Joseph Lappia, a founding member of the Flying Stars and now its president. “The players see each team member as family, and our role is to be the family they never had. It is very important for the continuation of the team’s legacy and hope.”

Just like the spirit displayed on the seaweed-laden pitch that day, the team thrives in the face of adversity. After meeting members of the Flying Stars in their hometown, my Dictaphone is packed with stories of profound personal triumph. The background of star player Samuel Walker Koroma, for instance, is just as inspiring as his playing style. He was only five years old when he developed a tumour on his foot. In 2007, doctors told his mother it was cancer and his foot needed to be amputated before the disease spread to other parts of his body. “It was a tough decision, and it felt like my life was coming to an end,” says Koroma. He was in year two of primary school at the time, and despite the pain caused by his leg still played football with his friends at school, working side-jobs to provide for his mother and sisters.

Peter Sesay, Koroma’s friend and now teammate, was just a year old in 2001 when he also lost his leg. He was strapped to the back of his mother when she slipped, fell on her side, and broke a bone in baby Peter’s foot. The injury took three months to heal, and when his mother couldn’t find proper treatment in Matoma, a village near the northern city of Makeni, she took him to the emergency hospital in Freetown. Tragically, it was already too late. Both Sesay and Koroma grew up not only in the shadow of their disabilities, but the poor employment and living prospects for people like them in Sierra Leone, where even able-bodied young men can barely cope with the country’s numerous challenges. Despite its vast mineral deposits, the tiny African nation is among the poorest in the world. Unemployment in the country rises year on year, tempting many young people to embark on the perilous journey across the desert in Libya and the Mediterranean Sea to Europe. Some young people turn to drugs to help them escape the daily challenges that come with living here.

Despite their troubles, the two boys are determined to not let their conditions define them. After the accident, Sesay left his village of Matoma and relocated to Freetown in search of better opportunities. He began working in one of the city’s markets grinding cassava leaves, one of the country’s traditional dishes. Koroma was already living and studying in Freetown, but school was not the same for him any more. His friends looked at him differently after the amputation, some calling him by his unfortunate new moniker, ‘One Foot’. “I have seen how people treat beggars, and the thought of me becoming one scared me. I would sometimes cry,” says Koroma. Desperate, he began going to the beach for long walks and avoiding crowded places. The beach, he remembers, was where he found solace.

During one of his evening strolls in 2012, Koroma saw a group of amputees playing football in the same location he’d later clear of seaweed. Intrigued, he edged closer to watch them play, later asking if he could join in. “I wasn’t sure I wanted to be part of it,” he admits. Back in his community, the bullying got worse. Anyone looking in his direction, he recalls, had either a pitying face or one of mockery. “Sometimes when I would stop to ask someone for directions, the person would immediately think I wanted to beg him for money and tell me to go away.’ It was too much for me.”

By 2017, Bornor Kargbo, one of the amputee football players he met at the beach game, began inviting him to join them during practices. Koroma remembers just how challenging it was to play football with crutches, which would get buried deep in the sand when pressed with force. He would fall each time he attempted to kick the ball, but instead of mocking him for his poor skills, his teammates would make empathic jokes and encourage him to try again. As his football skills improved, Kargbo was eventually able to convince him to join the team. He and Sesay joined the same year.

Kadiatu Koroma, one of the team’s female star players, lost a leg after being shot by rebels during the war in 1998. After losing both parents around the same time, she relocated to Freetown, where she turned to street begging. Her only means of shelter, she recounts, was in the city’s markets, where she experienced constant violence and humiliation. “People called me ‘foolish beggar’ in the streets, and at night boys would follow me to where I slept and try to rape me,” she says. “I ran from danger in one neighbourhood only to [find it] in the next neighbourhood. It was difficult for me.” To Koroma’s surprise, a member of the Salone Flying Stars found her begging in the streets in 2009 and invited her to practise with them. She finally joined in 2010.

For Bai Tarawally, the team’s coach, the Flying Stars feel more like a family than a squad. After Tarawally’s brother had both his arms amputated by rebels during the war, he became his sibling’s “second hand”, feeding and bathing him daily. When the nation’s Centre for the War Wounded charity took in his brother, they let Tarawally stay with him, and he eventually found a community among other amputees. They became his family and, in 2011, he took the helm at the club.

Today, the Flying Stars have a satellite team in neighbouring Liberia and have participated in a number of conferences and fundraising events for amputees worldwide, including the 2009 Peace Conference in Holland and a 2016 fundraiser in Spain. The team has competed in the African Amputee Nations Cup, a competition it helped form, hosting its maiden games in 2007 in Freetown.

“Sometimes, I look at my teammates, especially the girls, and wonder what their lives would have been if it wasn’t for football.” – Samuel Koroma

For Samuel Koroma and his teammates, the Flying Stars is not just a team of athletes to play football with, but a community he feels free to dream amongst. “The game has brought together people with no possibility of a future other than begging and being exploited,” he says. “Sometimes, I look at my teammates, especially the girls, and wonder what their lives would have been if it wasn’t for football.”

Now 31, Koroma dreams of becoming a politician and forever transforming the country that shaped him. For now, though, his life centres on the beautiful game and when he is not at the beach playing with his teammates, he’s at home watching Arsenal FC and the gravity-defying skills of his favourite footballer, Bukayo Saka.

“Thanks to Bornor, I found a family outside my family in the team,” he says as we leave the pitch behind. “I feel special and fortunate – because not everyone will see me stand in front of them and automatically think, ‘He’s a beggar.’ I can’t be defined by my crutches any more.”