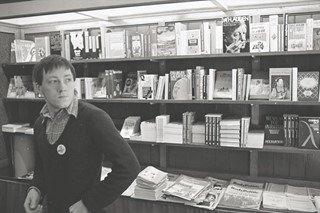 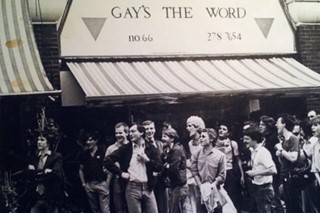 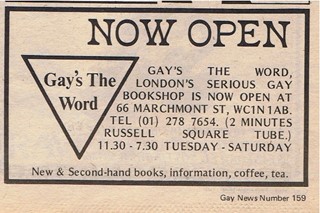 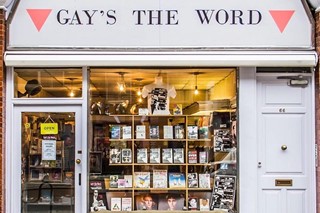 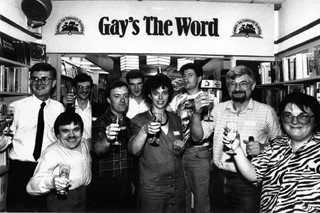 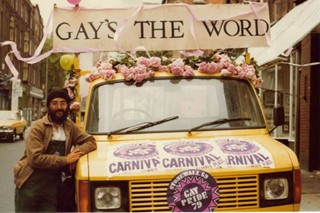 “Looking back, I think I came to London to be gay,” says 58-year-old Jim MacSweeney, who moved to London from rural Ireland in 1982. “I was 22 and I had told just one person. London was about coming out and accepting myself. I never looked back.” Later this year, Jim will celebrate 30 years as manager of Gay’s the Word bookshop, England’s only LGBTQ+ bookshop. In January, the shop – which is named after an Ivor Novello musical of the same name – turned 40.

Ernest Hole founded Gay’s the Word four decades ago after visiting The Oscar Wilde Memorial Bookshop in the late 1960s, which was the first gay bookshop in the US. Sat innocuously between a phone repair shop and a café in London’s King’s Cross area, Gay’s The Word has outlived its US cousin and British peers such as Edinburgh’s West and Wilde and Brighton’s Out. Glasgow’s Category Is Books, which opened in September 2018, is the only other queer-focussed bookshop in the UK.

Gay’s the Word has always been more than a shop. In fact, when it first opened, it was “part café, part bookshop” where friends used to talk, smoke, drink, organise and occasionally read too. The café element was eventually scrapped due to “licencing issues”, but the shop’s focus as a political space, where public good trumps profit, has always prevailed. Jim first visited Gay’s the Word as a member of socialist LGBTQ+ group Gay Icebreakers, which the shop’s founder was also an active member of. Three decades on, TransLondon and the Lesbian Discussion Group both continue to use the shop as a meeting space.

“Suddenly I was reading books on feminism and being aware of my own privilege. My mind exploded. It meant I challenged lots of things” – Jim MacSweeney

In 1984, Gay’s The Word became home to Lesbians and Gays Support the Miners (LGSM), a socialist collective aiming to financially assist the miners’ strike efforts against Margaret Thatcher’s government. The 2014 film Pride follows the story of the group, which was founded by late gay rights icon Mark Ashton. The success of the film has introduced the shop to a new legion of younger followers. “When I gave the studio permission to use the bookshop front, as they couldn’t film inside because it’s too small, I had no idea the affect it would have,” Jim explains. “Thanks to Netflix, a whole new generation have found us, so that’s been extraordinary.”

Jim is fascinated by how LGSM and films like Pride have inspired a new wave of activists who, for the most part, are hyper-aware of the intersectional challenges faced by marginalised groups. He says that the idea of shared activism has always been integral to the Gay’s the Word ethos. “When I arrived in London and went to the Icebreakers group at the shop, suddenly I was reading books on feminism and being aware of my own privilege. My mind exploded. It meant I challenged lots of things. But now, new generations are so aware of gender, race and new identities,” he says. “I was at the launch of LGBTQ+ history month and it was completely packed with young people. Whether it’s about the environment or migrants, LGBTQ+ people are out there challenging other battles that need to be won. He is also impressed by how aware young people are of how quickly rights can disappear. “Young people are seeing what’s happening in the United States and Russia,” he says. “They’re aware that, if you don’t know your history, the same can happen here.”

Getting to this place has not been without struggle. Jim remembers the “low point” of repeated raids in 1984. The raids, which were carried out by HM Customs and Excise, seized imported books under the assumption that obscene materials were being sold. Criminal charges were brought against staff and owners, which were eventually dropped. “We raised money to fight the charges, which could have closed the bookshop. That fight was the biggest in the shop’s history.”

Like so many queer spaces, Gay’s the Word has also faced financial difficulties. As gentrification has caused demographics to shift and vulture-like developers to circle, many have been forced to close their doors, including the NYC shop that inspired Gay’s the Word. “This was a really important space in the 80s – it was where you came to get gay books. In the 90s it became more difficult and Soho started as a gay area so you didn’t have to come here anymore,” Jim explains. “There used to be a lot of sex work around King’s Cross. There were lots of queer spaces and it used to be a real hub of gay activity. Though it’s probably best we didn’t set up somewhere west because we’d have been priced out decades ago.”

Jim recalls that business slowly became more difficult and in 2006 he thought the shop’s time had come. “We thought: ‘Is this it? We’ve done a great job, but maybe it’s time to close up? After all, no one owes us a living’”. Though after emails requesting that supporters sponsor shelves were picked up by newspapers, cheques began to flow in and people realised the affection they had for Gay’s the Word.

Rikki Beadle-Blair, a British actor, director, playwright, and singer who is a leading figure in London’s queer cultural scene, performed at Gay’s the Word’s one month opening party in 1979. “It’s so important to go to a place where you don’t feel self conscious about what you’re interested in,” he says. “In the 70s, I was young and even though I was confident about being ‘out’ there were all these barriers to being out and few places you could go and no one would judge you. I grew up loving words and it was lovely to have those things come together at Gay’s the Word.”

“Queer people have to go out and step on these planes that no one is stepping on. We have a choice about whether to be honest or disappear” – Rikki Beadle-Blair

Beadle-Blair believes that queer people who put their experiences down in words are of vital importance. “Anybody who chooses to be themselves is making a massive political statement in a culture where we are constantly asked to dislike ourselves,” he says. “Queer people have to go out and step on these planes that no one is stepping on. We have a choice about whether to be honest or disappear.”

Just as Gay’s the Word now sells books exploring the intersections of race, age, class and religion with queer identities, the shop has has always strived to be trans-inclusive. When I visit, Jim shows me the trans shelf and the youth section, which he decribes as “very fluid”. Author Juno Dawson first visited the bookshop in 2012. “I was quite new to London and it blew my mind that there was a place just for LGBTQ+ books and nothing else. I didn’t know if there was anywhere else in the country like it. If LGBT+ people don’t exist in the world of fiction, we don’t exist in the world. It means our lives aren’t as important and we agree that our lives are important.”

Dawson and Beadle-Blair recently celebrated Gay’s the Word’s 40th anniversary at the British Library, at an event hosted by author Damian Barr. “I first visited Gay’s the Word on a trip to London when I was a student,” Barr recalls. “It was the first time that I’d met other queer people from around the country. I fell in love with a man called Colin from Hull who had long hair. I couldn’t believe that Gay’s the Word had all the books that I’d asked for at the library. There was no shutter and you could just pick them up – it was amazing.”

Barr believes that LGBTQ+ books are a vital tool for spreading empathy. “If we read books about other peoples lived experience then we can understand what it means to be them, which is affirming for queer readers and challenging for people who wish we didn’t exist,” he says. “Gay’s The Word hasn’t just been a passive mirror of our culture, it’s helped change our culture and liberate minds.”

Jim partly attributes Gay’s The Word continued success to Pride, but also to embracing the changes in LGBTQ+ culture, such as social media, while adapting to their audience. “I don’t think we’ve ever been as busy or as relevant,” he says “Don’t buy a book buy you should, buy one because it’s a great bookshop.”

Though while he wants customers to enjoy themselves without obligation, he still feels huge personal responsibility for the shop’s mission. “We try and create a non-judgemental space that’s welcoming without thinking about it. Here, you don’t have to change anything,” he says. “All of these books are part of the LGBTQ+ experience and just by being we’re political - that’s what I want to continue.”

Jim has been at Gay’s The Word through the Aids crisis and Section 28. While there have been significant advances in the UK since then, the shop is still visited by LGBTQ+ people from countries where being gay can be dangerous. Despite 70 countries still criminalising same-sex relationships, he feels optimistic for the future. “The new generation gives me hope and joy. Politics and the community have changed and we aren’t afraid to change with them.” He says, concluding: “More than anything working in this space reaffirms my faith in humanity. The customers, laughing with them and talking about books is a real pleasure and a privilege. It feels like coming home.”