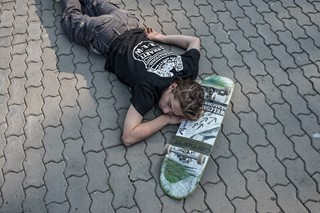 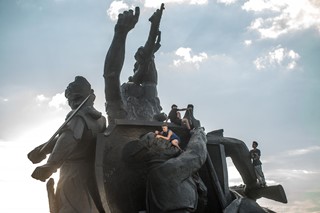 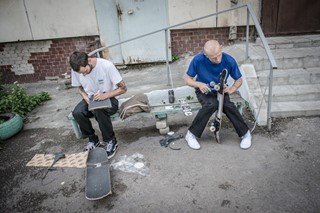 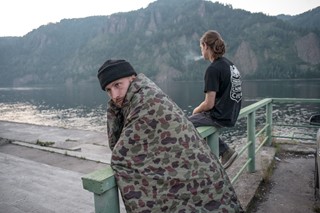 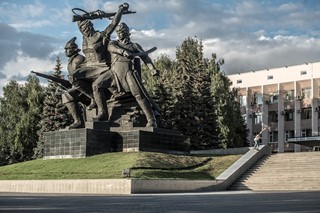 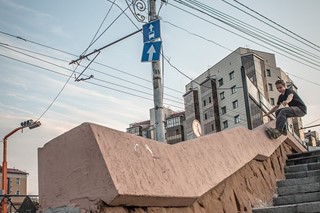 Officially, Tolia Titaev is a Moscow-born skater and tattooist – but after speaking to him, you’d be forgiven for thinking he’s in the running to be Russia’s minister for tourism one day. Titaev is best known as one of the country’s most prominent skaters, as well as a model-slash-muse, owing to his longtime friendship with designer Gosha Rubchinskiy. The duo also has their own skate brand together, PACCBET, which promises to expose the real world of Russian skate culture to a wider audience.

That ‘real world’ is one far removed from the cheap sportswear and cold Constructivist architecture that many have come to categorise as the prevailing ‘post-Soviet’ aesthetic. For Titaev, many of these tropes are wholly inaccurate – he often seems at pains to emphasise just how similar Moscow is to other European cities. “We’re just normal people, like everywhere else, doing similar things,” he says over the phone from his home city. Unlike what many reports would lead us to believe about life in Russia, life here is good, according to Titaev.

Last summer, along with the skate teams of Carhartt WIP and Moscow’s Absurd Skateboards, Titaev set out to explore even more of that Russia. Packed into two cars, the gang journeyed from the towering skyscrapers of Moscow to the idyllic Lake Baikal in southern Siberia, exploring the vibrant cities, vast countryside and burgeoning skate scenes of the world’s largest country along the way. The trip was captured and turned into a 21-minute docu-skate film titled O3EPO – a mix of the rolling scenery and pulsating skate sections – and a zine with pictures from the trip, capturing the local characters, Carhartt WIP skaters and an unseen side to Russia.

Here, we speak to Titaev about skateboarding informing his creativity, skaters’ views on Russian politics, and why next year’s World Cup opened up a whole new landscape for him and his fellow riders.

Would it really be so bad if AI took our jobs?

ON FIRST PICKING UP A SKATEBOARD

“I started skating 12 years ago – I was inspired by all the older guys in school who skated; they all seemed cool. It was 2005, everyone was listening to rock music and those kinds of things. So I wanted to be cool and skate and be in a, how you say, ‘gang’ with these guys. My mother bought me a skateboard for my birthday and I just started skating near my house on a basketball court, trying to do ollies. That was during the second wave of skateboarding in Russia, now it’s the third.”

“Skating definitely helped inform a do-it-yourself attitude towards other things. For example, I started tattooing because I’d been drawing all of my life. One day, one of my best friends Oleg called me when I was 15, like, ‘Have you seen these guys from the US? They’re doing stick and poke tattoos.’ I didn’t know what it was, I was like, ‘Is it real?’ He was like, ‘Come over and I’ll show you.’ So I went to his house, we did a stick and poke tattoo with pen ink and a needle. I loved it, so I just started doing it more and more, and then learned how to do it properly. Now I’ve been doing it for eight years.”

ON WESTERN PERCEPTIONS OF RUSSIA

“People who have never been here, they seem to think what happens here isn’t normal. People always ask me, like, ‘What do you do in Moscow?’ But we’re just normal people, like everywhere else, we do similar things. The kids listen to hardcore music, or trap music at the same time. There’s also a lot of Hip hop parties, techno parties, hardcore parties – a real mix of everything. It’s hard to say what is the most popular, but I think there’s a lot of young people doing parties now. I think they feel more empowered to be creative. They want to say something – or just do it because they like it.”

“People always ask me, like, ‘What do you do in Moscow?’ But we’re just normal people, like everywhere else” – Tolia Titaev

ON JOURNEYING FROM MOSCOW TO SIBERIA

“I’d never visited most of these old cities. I’d never travelled through Russia before, so didn’t know there was all of these beautiful open roads and scenery. It was a super inspiring trip, I got to see almost all of Russia. The final destination was Baikal – the largest freshwater lake in the world – it was insane, super beautiful. In every city loads of kids came to the skate session, to hang out and show us the good skate spots. And in the evenings we’d go to somebody’s, and there’d be like 100 people and a party. It’s pretty huge that everyone was skating. Even if they don’t have a skate shop in the city, they’d be trying to work out ways to get boards, whether that was ordering boards from skate shops in other cities or something else.”

ON RUSSIAN SKATERS' ATTITUDES TOWARDS POLITICS

“Between each other, we’ll talk about politics. But not politics in Russia, politics everywhere. I guess it kind of looks crazy from the outside. I was travelling all around the world this year, and in Europe you see them talking on the news about Russia and US, and the conflict between them. But they don’t about the politics inside Russia. For us, the government has done a lot for people in Moscow, and they’re trying to do the same for other cities.

I mean, everywhere has crazy people. But life in Russia is similar to everywhere, it’s a normal situation. All my friends from all around the world, they were here this year and the year before, and they all wanted to visit again. I had one friend, Val, ask me if he could bring his Levi’s t-shirt with a rainbow flag on it. I was like, ‘What the fuck are you talking about, man? Of course you can bring it. Nobody cares.’ I don’t think a lot of people know what a rainbow flag stands for. I don’t think anyone cares.”

“Last year when we went on the O3EPO trip, the cities started to prepare for the 2018 World Cup. Now they’ve started to complete all streets, there’s a lot of marble. They’ve rebuilt the whole city now, and we have tonnes of spots to skate. The whole summer we’ve been trying to skate them. We can just go wherever and every time we’ll find new spots for skating and filming. All of us in the Russian scene, we just want to grow and do what we want to do – to present Russia and Moscow how we see it. And hopefully people will then come to Moscow, not just for the World Cup but for skating.”