Like many of us growing up I was obsessed a computer game called The Sims made by Electronic Arts (EA). I would spend hours poring over my characters, watching them go through everything from their first love to pregnancy and heartbreak – and sometimes sadistically killing them by taking away the ladder from their swimming pool. But there reached a point in my life, at the tender age of 14, that I realised that I was spending too much time on the game. So, when I was gifted a new computer, I actively didn’t download The Sims (and started going out and drinking underage instead).

Just two weeks ago however, The Sims came steamrolling back into my life when a Facebook post on the black simming community went viral. Ashleigh Nicole Tribble, a 27-year-old from New York, had put together some stunning images of specially customised black Sims doing their thing and looking fly. The post was shared nearly three thousand times.

When I ask Ashleigh why it was important for her to collate the images, she tells me she’s been playing the game since it first came out. “One thing that I noticed was that there was never really any nice options in the ‘base’ game for any of the black characters.

“There was never enough skins. If you make them black the skins make them look really ashy, or they’re a bad colour, or make them straight up the colour black. I don’t think EA purposefully leaves them out, but I think it’s an afterthought. Not a lot of people think that black people like videogames or computer games so they’re probably not hiring enough black people to work in graphic design or production."

EA does support the usage of custom content in Sims 4, although it says that users will be doing so "at their your own risk". Despite trying to reach them for comment for this article, we’re yet to receive a response. To Dazed's knowledge, they have never tried to reach out to any of the black simmers creating custom content.

There is a whole black simming world that is taking diversity into its own hands. There’s different sites where you can get custom content for the sims in general, but Tumblr is where it’s at for black folks, with users such as Xmiramira, Ebonixsims and Blvck Life Simz leading the way. There’s lush, dark skintones and different hair textures – braids, afros and even laid edges. Thicker thighs and fuller lips. Not only can users download sims that look like them, but they can also get other black-themed content; hair products and weaves, clothing that we might be more likely to wear, and makeup that actually pops with melanin.

According to Ashleigh, making custom content requires an “extreme” amount of graphic design skill and time, but the majority of users give away their content for free because of the moral cause: they believe that it’s important for black people, who for so long have battled to see themselves reflected in the mainstream media and in positions of power, to have representation in the virtual world.

On Facebook pages including The Black Simmer, which has over three thousand members, and The Black Simmers Community, with just over one thousand, black users share YouTube tutorials and storylines about their (mainly) black sims – discussing names, backgrounds, and where to get the best custom content. They treat it as a hobby; something they take seriously and invest plenty of their time in. Sims are talked about with real passion and love, like extended members of their IRL family. But the users also discuss the racism in the wider simming community.

“I make a sim, and not only does her skin look grey, but every lipstick I apply makes her look like she’s been eating powdered doughnuts” – Amira Virgil

"Does it bother anyone else when they see a POC/Black sim and call them exotic? Like whattt..They’re not animals and I really find it creepy/fetishizing like they’ve never seen a darker sim before with non-european features," reads one recent comment. "Ask them to name your black sim and you’ll get a name like Shaquanda..put a Asian man & black girl in a relationship and someone comments ‘I don’t think they should marry’ cause the Sim is black smh,” says another, referring to mainstream sims Facebook pages.

Amira Virgil, aka custom content maker Xmiramira, is the creator of The Black Simmer. A key figure in the black simming community, the 23-year-old Brooklynite has been a "simmer" since she was around 11, but only started creating custom content in the past year. “All I wanted to do was create beautiful black sims that reflected me and those around me,” she says. “I used to search custom content websites high and low. No one had the type of tones I wanted. Deep hues with golden undertones."

After creating a Melanin Pack for users to download, Amira realised that it was actually pretty difficult for people to source black custom content just through Tumblr. The idea to create a forum came to mind. "It would be a place where people would learn, share, and create content," she says. “Without having to deal with the subtle forms of racism a lot of the other Sims groups and spaces online are filled with. They would say ‘her lips are too big, her hips are too big’ – negatively discussing curvy sims as if curvy people don’t exist. Or discussing a facial feature negatively, only when it’s on a black sim.”

That this is a phenomenon mainly driven by black women is particularly interesting, as we’re not typically associated with being interested in the nerdy gaming world. Only 12 per cent of game designers in Britain and 3 per cent of all programmers are women. This bleeds into our often sexed-up virtual depictions, but a 2014 study by the Internet Advertising Bureau found that 52 per cent of the gaming audience is made up of women. Another found that up to 69 per cent of sims players are female (an earlier figure put it at 60 per cent).

“Young, impressionable children in an anti-black society constantly need to be reminded that they are beautiful, they are worthy, and that they are capable of anything that they put their minds to” – Amira Virgil

Acknowledging that black women take up a lot of space in the simming community, Amira thinks it’s because it’s one of the few games where we have a lot of control as far as creation and customisation goes. "Representation is everything," she says, explaining that a key part of the game for many people is creating characters that look like themselves, or their family.

“I’ve been a gamer since I was four years old, and there are very few times I’ve been able to play a black character in a game, especially a black female, if any," she says. "It mirrors real life issues. Such as black women being ignored in the mainstream makeup industry. I make a sim, and not only does her skin look grey, but every lipstick I apply makes her look like she’s been eating powdered doughnuts. It opens up dialogue for a lot of questions like: why don’t people tend to make darker sims?” 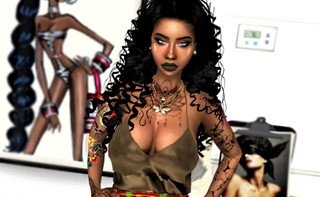 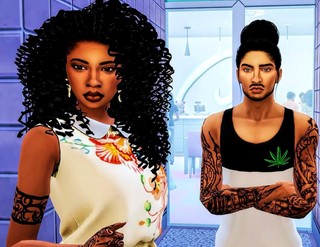 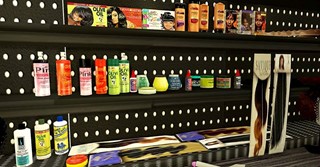 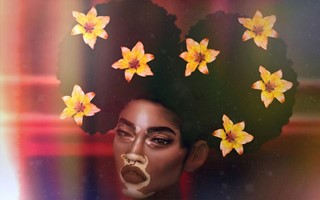 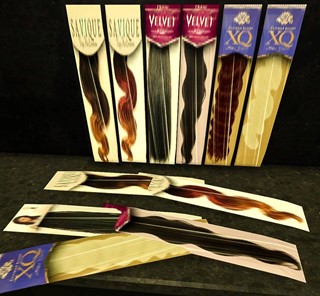 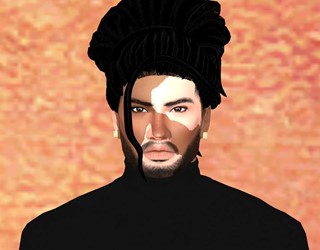 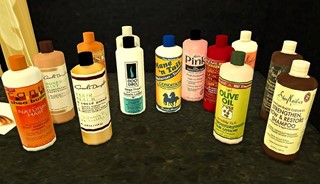 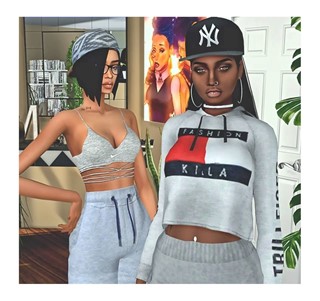 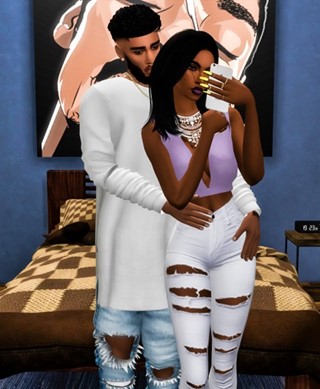 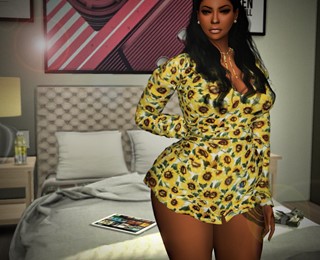 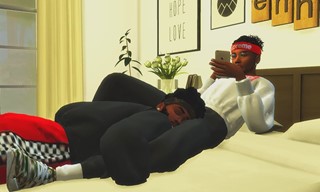 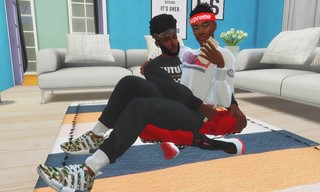 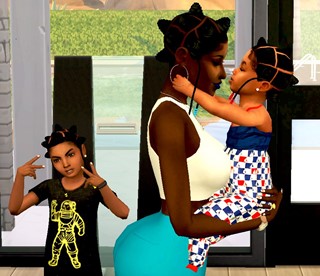 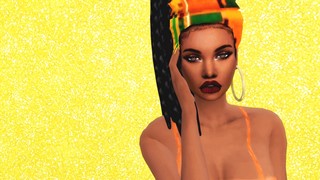 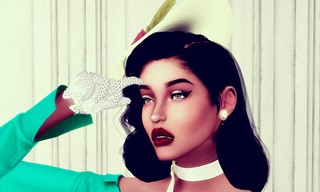 It’s true that when I played The Sims as a child I used to actively avoid making darker-toned characters. My sims were usually dark haired white women with green eyes, because, in part, that’s what beauty meant to me. And I have to wonder whether even if there had been the option to make Sims that resembled a little dreadlocked mixed-raced kid, I would have. When I ask Amira whether she thinks black people create white sims to be aspirational, she agrees and says it’s a point of contention in the commuity at present.

“This is the very reason is why my father absolutely insisted that I play with nothing but black dolls growing up," she says. “Young, impressionable children in an anti black society constantly need to be reminded that they are beautiful, they are worthy, and that they are capable of anything that they put their minds to.”

“You’re just free to play as a black person in whatever story, in whatever way you want” – Ashleigh Nicole Tribble

This conversation also gets me thinking about whether the reason there seems such a strong, growing community of black simmers is because it enables an escapism that black people need more than most. As much as it reflects real life and elements of the game are impacted by racist attitudes, Ashleigh thinks black people become more personally attached to their black characters because it takes so long to create them.

"You have to literally go and find all this custom content to make it reflect your world," she says. "And it doesn’t have the added stress of institutionalised racism, or systematic oppression. You’re just free to play as a black person in whatever story, in whatever way you want. That’s why people end up playing The Sims for hours. You don’t have to deal with those stressors of being black in the game."

Rapper BBYMUTHA, a GHE20 GOTH1K affiliate (check her out, she’s wild), describes her love for the game and modding black characters. “I treat my sims like my kids,” she says. “I be so sad when they die it’s ridiculous. I spend at least 45 minutes creating each sim, watching then grow up and be successful. LMAO I get attached. I honestly didn't know there was much of a black simming community until I discovered mods and custom content. No shade, black culture will forever spice anything up. Being able to make a sim look more like me is another thing that makes it easier for me to be attached to my sims. Having other black folk to trade sim stories with is fun too.”

“No shade, black culture will forever spice anything up. Being able to make a sim look more like me is another thing that makes it easier for me to be attached to my sims” – BBYMUTHA

The majority of black simmers appear to be based in the US, but there is a small cohort of black British simmers too. Twenty-five-year-old Danielle Udogaranya, who goes by the moniker Ebonixsims , has been simming since the first game came out in 2000, and has been making custom content since December 2015. “When I started making custom content my aim was to make content that was directed to us, at us for us," she says. “I realised how life-changing it is not just for people my age, in their 20s and teens. But for kids as young as six and seven having content for them.”

“There aren’t a lot UK black simmers. I’ve met a handful. Four or five. The reason for that? I don’t know. I didn’t know much about the black simming community until I joined Tumblr, and it’s not a big thing in the UK. There’s UK groups but they’re not as diverse and accepting of sims of colour.” She suggests that people of colour don’t feel as encouraged to post stuff or even be involved in the community as pictures of their customised black sims don’t get as much love as an average white sim.

When you hear the words “radical feminist”, you aren’t likely to think about the EA game The Sims, but this burgeoning community is certainly creating politically-charged new worlds – virtual or otherwise – because the one they’re living in doesn’t reflect them. And it’s beautiful.