Valdimar Jóhannsson’s debut, out from A24, is a warped comedy drama about a couple in rural isolation and a lamb – it’s Iceland’s Oscar entry, but the team behind the movie don’t want you to watch the trailer, or read this interview 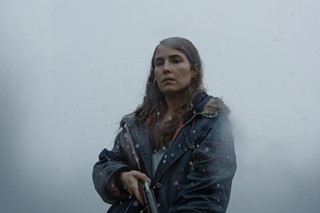 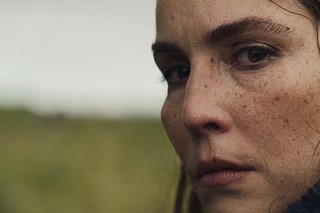 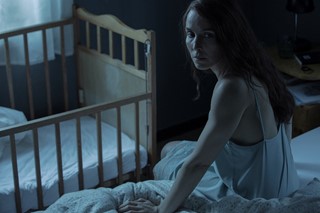 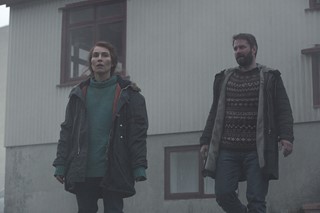 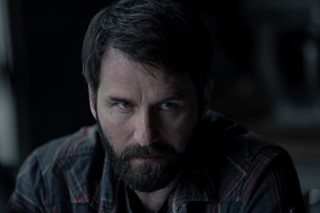 The creative team behind Lamb, a warped, Icelandic comedy-drama with a tinge of horror, don’t want you to watch the trailer. They’re not even keen for you to read this interview. What they do hope is that you can trust in the film’s critical reception (“bracingly original”, according to The Hollywood Reporter), its international reputation (it won the Prize of Originality at Cannes and is Iceland’s Oscar entry), and the high standards of its distributors (A24 in the US, MUBI in the UK). In other words, Lamb should be experienced like the sparse environment it’s depicting – utterly, utterly cold.

However, when the US trailer gave away the twist, it instantly went viral. “(A24 are) very smart with what kind of message they send out,” says the film’s Swedish lead actor, Noomi Rapace, before turning to her Icelandic director, Valdimar Jóhannsson. “You’d rather people came in not knowing anything?”

“The films I really want to see in the cinema, I try to read nothing about,” Jóhannsson responds.

“I never read anything beforehand,” Rapace concurs. “Some of my favourite films, I’ve seen that way. It’s in my face, and it takes over my body – and I’m totally unprotected in the experience.”

Sat side by side in the Mayfair Hotel during the London Film Festival, Rapace and Jóhannsson, aged 41 and 43, agree to discuss Lamb with spoilers, because otherwise any conversation is impossible. The deeply disturbed film – a Rorschach Test will be whether you go “ew!” or “ewe!” – introduces a married couple, María (Rapace) and Ingvar (Hilmir Snær Guðnason), in rural Iceland. For the first act, the isolated pair barely exchange a word; they simply care for the farm animals, day by day, with extra tender treatment for one lamb born in a barn. This cute creature, named Ada, receives household privileges: a cot in the bedroom; María feeding her with a milk bottle; and the love two humans typically reserve for their own flesh and blood.

Then around the 40-minute mark, Ada is revealed to be half-lamb, half-human. The head is of a baby sheep, the lower parts are like a regular kid. Of course, as the saying goes, you’re not supposed to work with children or animals, but what about a nightmarish, CGI-augmented hybrid of the two? What Jóhannsson slyly does is to frame the fantastical concoction with utter seriousness. With Rapace committing to the bit and wringing raw, piercing honesty from her scenes with Ada (in reality, a mixture of child actors, puppetry, and CGI), it’s as if Mike Leigh took an edible and continued with his familiar, grounded work methods. Thus Lamb, the filmmakers insist, is not a horror.

“Some of my favourite films, I’ve seen that way. It’s in my face, and it takes over my body – and I’m totally unprotected in the experience” – Noomi Rapace

“When we were shooting, it became very real for us,” Rapace recalls. “I forgot that we were making a film. We shot with babies, we shot with lambs. Ada was very much physically present. There was not a huge difference from other films that I’ve shot.”

“We treated this story like we totally believed in it,” Jóhannsson adds. “We were not trying to do something that was strange. If you’re making a film like this, and you want the audience to believe in it, you have to believe in it yourself.”

However, I counter that Lamb is a daylight horror. After all, if I saw a human/lamb amalgamation in real life, it would probably ruin my day, and much of the plot’s tension revolves around Ada’s father, a menacing ram, looming around the corner and waiting to strike at any moment.

“It’s a nightmare and a dream at the same time,” Rapace suggests. “It’s day and night, and the beautiful breakpoint between those two elements. If Ada was a human baby, it’d be a drama. If there were more creature elements, it’d be sci-fi.” She pauses. “Maybe a soft, daytime horror-drama.”

That Rapace comfortably juggles Lamb’s various tones is a testament to her varied filmography. A few years after breaking out internationally as Lisbeth Salander in the original version of The Girl with the Dragon Tattoo, Rapace was cast as the lead of Ridley Scott’s Prometheus. On Scott’s Alien prequel, Rapace briefly met Jóhannsson, who worked in the special effects department, and the pair would unite nearly a decade later when Jóhannsson pitched her his idea for Lamb.

For Lamb, his debut feature, Jóhannsson wrote the script with Sjón, the Icelandic poet known for penning lyrics with Björk and co-authoring Robert Eggers’ next movie, The Northman. “We spent a long time on the script,” Jóhannsson says. “We went to the cinema, we read books, we watched documentaries about animals.” Jóhannsson, funnily enough, worked on special effects for blockbusters like Rogue One before Lamb, and there’s a touch of sci-fi to how he depicts the farm: the area is too quiet, as if civilisation has been abandoned; horses march through snow and otherworldly environments that could be snapshots from Prometheus; sheep stare into the camera and break the fourth wall.

The dream logic may also be deeper than anyone realises, Jóhannsson included. At the film’s premiere in Iceland, Jóhannsson’s mother brought the dream diary he kept as a teenager; in one description of a nightmare, he wrote about gigantic rams eating polar bears. “I had totally forgotten about this dream,” Jóhannsson says. “It’s very similar to Noomi’s dream in the film.”

Does that make María a polar bear?

“Polar bears are very rare in Iceland,” Jóhannsson says. “But they can come on a glacier. It happens.”

“Can they survive in Iceland?” Rapace asks.

“They get shot?” Rapace says.

“Yes,” Jóhannsson says, “because they’re a threat to people.”

“But anything out of its own comfort zone is a threat, right?” Rapace says. “When you feel you’re being threatened, you become aggressive. So Maria might be a bit of a polar bear. The way she acts with the mother sheep calling for her baby is really aggressive. I hit back even harder.”

Like most horror movies – or movies that lead to the director denying in interviews that it’s a horror – Lamb doubles as an effective comedy. María and Ingvar behave as if Ada is a perfectly normal child, just with its own inbuilt jumper. As a trio, they go on family walks, eat at the dinner table, and generally trick the viewer into forgetting what Ada really is. Then Ingvar’s brother, Pétur (Björn Hlynur Haraldsson), visits, and, in true Larry David style, he bluntly yells, “What the fuck is this?!”

“We are animals, but it’s almost like we want to forget that we are. When it comes down to it, the way we react and act in everyday situations is quite primal. We go on pheromones, we go on hormones, we read body language” – Noomi Rapace

As a further punchline, the threat to María and Ingvar’s marriage isn’t that they stole a lamb/human creature, but Pétur’s constant attempts to rekindle a sexual relationship with María. “They have a history, but she made her decision,” Rapace says. “She loves Ingvar and is with him. But her femininity comes to life after Pétur’s arrival. She makes love to her husband, and they’re dancing, and she becomes more physical. But Pétur is a direct threat. She’s like, ‘You need to leave. You’re threatening my happiness and this new chance for life that I’ve been given.’”

Due to the lack of dialogue and the open-endedness of the imagery, Lamb allows for multiple interpretations. The absurdity of the family unit. The lies we tell ourselves in order to be happy. How childless couples find alternative lifestyles. What cat and dog owners look like to everyone else. When Ada’s father visits the household, it’s also visualising the fear that, one day, animals will take revenge on humans. “In Iceland, there’s millions of sheep and 350,000 humans,” Rapace says. “It’s scary when you think about it.”

In Lamb, the two-and-a-half human protagonists are especially outnumbered in the rural landscape. As Rapace, now London-based, spent a chunk of her childhood in Iceland, she knows that sensation all too well. The Swedish actor even did all the onscreen lambing herself. “We both grew up on farms,” Jóhannsson says. “Usually there are a few lambs you have to treat as a baby. You have to feed them. Maybe the mother sheep doesn’t want them, or died when giving birth.”

“We are animals, but it’s almost like we want to forget that we are,” Rapace says. “When it comes down to it, the way we react and act in everyday situations is quite primal. We go on pheromones, we go on hormones, we read body language. I, at least, tapped into my inner animal when we shot it.”

When Lamb was released in America, it was a surprise box-office success; in an era when movies seem to be flopping theatrically, Lamb broke the record for an Icelandic film’s debut in the US. Understandably, it’s the kind of film you want to view with unsuspecting strangers, and perhaps discuss with them afterwards. Although the plot is inherently ludicrous, Rapace and Jóhannsson speak about their film as if it were Ada: a strange, delicate creature that they’ve raised, cared for, and are now introducing to the world.

“I came back to London in September (in 2019) after shooting it during the summer,” Rapace says. “I pulled out of another film. I was like, ‘I need to find out what I became after this journey.’ And then COVID happened. I got a seven-month break after Lamb where I was breathing it, living it, sweating it out, and becoming the new Noomi.” I obviously can’t let her stop there. Who is the new Noomi?