Director Yngvild Sve Flikke discusses the rude and refreshingly honest film, expectations of young mothers, and how a new slew of Norwegian filmmakers are challenging society’s most difficult questions 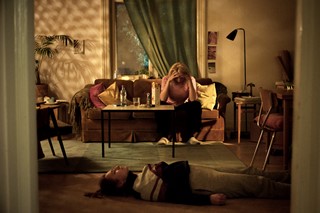 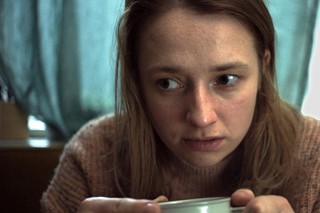 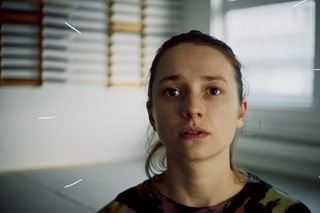 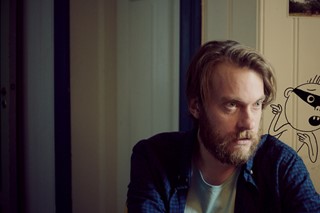 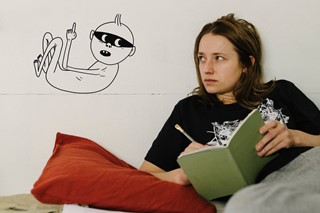 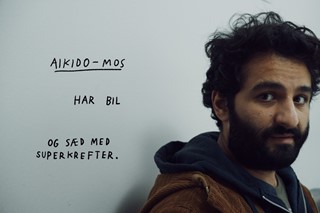 Rakel is living a real-life Mamma Mia. The 23-year-old, greasy-haired, Norwegian slacker has realised she’s six-and-a-half months pregnant, and the father is one of three men dating back to “Dick Easter”. Foul-mouthed, impulsive, and reluctant to be a mother, Rakel isn’t a typical romcom lead, nor is Ninjababy a typical romcom. For instance, Rakel, as played by Kristine Kujath Thorp, is unafraid to break the biggest taboo of them all – she openly detests ABBA.

“ABBA was one of my first idols when I was young,” Yngvild Sve Flikke, the 47-year-old Norwegian director and cowriter of Ninjababy, tells me over Zoom. “I would sing all their songs. It’s the way we make fun of Angelina Jolie in the film as well. Comedy is fun when you aim it upwards. They can handle it.”

Rude, refreshingly honest, and ultimately poignant, Ninjababy tackles another taboo unrelated to ABBA – Rakel is unmoved by the prospect of motherhood. Typically in pregnancy movies, the woman, no matter how cynical or hard-partying she is, will have an epiphany, usually in a hospital just before the end credits, or the parental urge is just baked into the character. But not Rakel. Ninjababy suggests it’s a lie that no one ever regrets having a child – it’s just a sentiment rarely expressed out loud.

“I’ve been pregnant twice, and they were very wanted pregnancies, but I wanted to get to the truth of it,” Flikke says. “There’s so much expectation put on you as a mother – it’s different from the expectation put on a father. It’s not like becoming a mother and giving birth is something that changes you. You’re still the same person after. Also, (postnatal) depression is common. You think you’re going to be so happy when this child comes out – and you’re not. You’re depressed because you’re not feeling the emotions that society thinks you should feel.”

“Rakel is 16 in the book,” Flikke explains. “She’s in high- chool. I didn’t want that type of story. I wanted to make a movie about being in your early twenties, having your life, your parties, your friends, and not knowing exactly where you’re going, but the one thing you know is: ‘I’m not becoming a mother. I’m not ready for that.’ And also the feeling that once you become a parent, life ends.” She slams her desk dramatically with a smile. “Life ends! You can never do any of that fun stuff anymore!”

Living in her own “Trash-o-Rama”, Rakel is a graphic designer with little income and a propensity for booze and casual sex. Over our video call, Flikke observes that we both dress like Rakel, in oversized, mismatching tops. “Isn’t it lovely to have comfortable clothing?” she says, pointing at her cosy sweater. “My daughters look at TikTok and TV series, and you see so many polished women. We made Rakel in opposition to that. Rakel wears makeup when she goes out if she wants to, but she doesn’t have to. She doesn’t shower every day because she can’t be bothered.

“We didn’t have hair and makeup on set. We put olive oil in her hair. The only scene she has clean, washed hair is in the last scene, when she’s a little more grown up. Not really, but a little bit more. It’s important because clothing for women is so uncomfortable. High heels and tight clothes aren’t comfortable. For this character, clothes should first and foremost be comfortable and practical.”

When Rakel fails (or passes) a pregnancy test, she deduces that the culprit must be a recent one-night stand, Mos (Nader Khademi), a D&D-playing aikido instructor who “smells of butter”. At the clinic, she learns that she’s actually six-and-a-half months into the process, just without an obvious belly bump. Even though Mos can’t be the father, he sticks with Rakel – and also keeps the flyer, because he’s that kind of person. I presumed Rakel’s late discovery was a comic conceit, but Flikke tells me otherwise.

“It’s possible,” the director says. “I did so much research. I interviewed a woman who was six months pregnant and didn’t know it. Your body and mental state refuse to consider it.” She mimes what it’s like to reject the notion of pregnancy. “You blame everything else. It’s not in your mind, because it would be a disaster.”

And maybe people need 10 months to trick or psychologically prepare themselves for parenthood, as opposed to Rakel’s abrupt realisation? “It’s a reason we’re made that way, I think. Even with a wanted pregnancy, you get conflicted feelings. You feel like you’re not going to be a good-enough mother. You feel like you’re doing the wrong thing.”

Also beneath the comedy is the ethics of ejaculation. Through Miss Marple-esque detective work (remembering who deposited where), Rakel construes that the father must be an immature, sexually irresistible bozo she refers to as Dick Jesus (Arthur Berning). During penetration, Dick Jesus didn’t receive or ask for permission to come inside her; his argument is that she should’ve been more specific, beyond her plea to not shoot it “on my face”. If she’d have requested he spunk into the coffee maker, he continues, he would have obliged. “You’re not rational when you’re in that commotion,” Flikke says. “When things like that happen, you tend to put the blame on the other. That’s the normal way of reacting.”

When Juno and Knocked Up came out months apart in 2007, they earned a combined $588 million at the box office. Since then, a backlash has formed, perhaps unfairly, against the perceived pro-life messages of their happy endings; Diablo Cody, the writer of Juno, revealed in 2019, “(I received) a letter from my Catholic high school thanking me for writing a pro-life movie. And I was like, I fucking hate all of you. I’m as pro-choice as a person can possibly be.”

As Rakel learns of her pregnancy beyond Norway’s three-month cut-off for an abortion, Ninjababy doesn’t make the dilemma a plotline. Still, Flikke wants to make her pro-choice thoughts very clear: “I didn’t want a scene where Rakel is thinking, ‘Should I have an abortion or not?’ The character would have an abortion, without a question. These rights are so important for women’s liberation. I see so many countries going in the wrong direction, and it really makes me frustrated. I think, ‘How can people think it’s OK to kill children and women in war, and then say you’re not allowed to have an abortion?’ I’m putting it in a naïve way, but it should be up to the parents to make that decision, not politicians.”

Ninjababy further subverts the staples of pregnancy comedies with an ending that surprised me in about three different ways. While Flikke conceived the final narrative twists herself – the graphic novel concludes with the birth – she suggests to me that it’s less startling to Norwegian audiences. Also invented for the movie were more fleshed-out male characters (in the book, it’s mostly Rakel and her best friend) and Ninjababy, an animated, bandit-dressed foetus who offers a crude commentary on Rakel’s fears and anxieties.

After shooting Ninjababy, Flikke discovered her old, handwritten teenage writing. As a 14-year-old, she jotted down reviews for all the films she saw. In the section for Who Framed Roger Rabbit, her younger self insisted that blending live-action and animation would one day be considered normal. “It’s probably been in the back of my mind all this time. It’s really weird – I’ve never done animation before.”

Outside of Who Framed Roger Rabbit, it’s rare for live-action to integrate with cartoons successfully. When Alain Resnais attempted it with I Want to Go Home, it was borderline unwatchable. But whereas Resnais juxtaposed French sophisticates with brash American comic strips, Ninjababy literally leaps off the page of Rakel’s personal notebook and visualises her inner psyche. “Inga was reluctant for Rakel to be a cartoonist, because Inga was a cartoonist,” Flikke says. “But it’s really Rakel talking to herself.”

Once convinced, Sætre agreed to draw Ninjababy in the sparse style of her graphic novel. After a coffee with the Icelandic artist responsible for the animation on The Diary of a Teenage Girl, Flikke was advised to work closely with Sætre and her editor during postproduction. “I put the editor and Inga right next to each other. The three of us put in things while we were editing. It was very fluid. We felt very…” She says a word in Norwegian, then struggles to translate it into English. I suggest: like ABBA? “Yes! We were like a smaller version of ABBA. When you can feel that you’re writing the film for a third time, it’s such a good feeling.”

“The youngest went to the premiere with us. But the 14-year-old – it’s embarrassing at that age to sit beside your parents and see someone having sex and talking like that. So she took her friends to see it. She came home and was like, ‘Yeah, it’s a good movie.’ And then she left. She didn’t want to discuss it.” Flikke laughs. “At that age, it’s embarrassing that your mother has made a movie with nudity and all that.”

Although Ninjababy only premiered a few months ago, there’s already been discussions about an English-language remake. Flikke is undecided about whether to set it in America or England, but knows, “I’m not going to direct it. I’ve moved on. And it’d be interesting to see someone else’s take on it.” And she can get paid, too. “We didn’t earn much money making this film, so that would be a good income for me, I hope.”

“Norway’s filmmakers create characters – female characters – that aren’t seen often. We question things about society that are difficult, and do it in an entertaining way” – Yngvild Sve Flikke

In the meantime, Flikke is preparing to shoot a Norwegian TV series – a political satire set in the 70s. With regards to her home country’s cinema, she says, “Norway’s filmmakers create characters – female characters – that aren’t seen often. We question things about society that are difficult, and do it in an entertaining way.”

Over the summer, Norway was represented at Cannes with Joachim Trier’s The Worst Person in the World, a subversive, female-led romcom that earned five-star reviews. One could imagine Ninjababy with the exact same film title, receiving the same compliments, also competing at Cannes. “Norway’s such a small country that when something resonates with the world outside, it’s so important to us,” Flikke says. “It’s good for (Joachim Trier). He’s very much in the warmth of Cannes. As I see it, as a female director, it’s a very male-oriented festival. When I was there, you had to wear high-heeled shoes on the red carpet. We have to evolve and be smarter.

“And my style? I don’t know if I would resonate with a Cannes audience. It really resonated in Berlin and America with SXSW, and gave us the belief it could speak to other cultures and countries, which is what you dream for a film. You don’t make it for your friends with the same worldview.” When I suggest that naming a film Ninjababy could be confusing for casual viewers, she shrugs, saying, “I hope it brings in an audience that would not normally choose (a pregnancy comedy).”

And what about fans of Mamma Mia – should they stay away from Ninjababy? “No!” Flikke says emphatically. “First they see the glossiness, and then they can see the grubby version.”