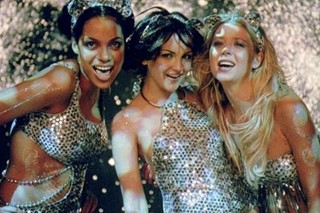 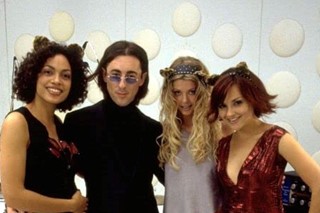 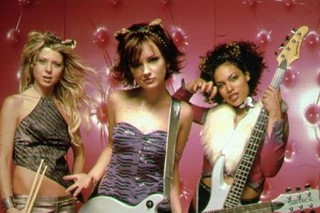 While operating perfectly well as a sincerely heartfelt tale of friendship in the face of growing fame, the film is also a feature-length jab at the industries behind its existence, skewering consumerism, subliminal advertising, and the very notion of adapting a comic into a movie. Josie is an indelible early 2001 time capsule, but it also feels of a piece with the later meta stylings of Phil Lord and Chris Miller, whose 21 Jump Street and The LEGO Movie also walk a fine line between enthusiastic adaptation of an intellectual property and more cynically questioning their very existence. Comparing it to closer contemporaries, it’s something like Spice World meets Zoolander.

Josie was made in the peak era of Mickey Mouse Club alumni (Britney Spears, Christina Aguilera) and moguls like Lou Pearlman (creator of *NSYNC). The silliness of certain aspects of that era’s pop music is taken to extremes with boy band DuJour, whose apparent demise in a plane crash prompts the talent-scouting of the more rock-inclined Pussycats, as a replacement act for MegaRecords’ nefarious schemes concerning brainwashing the world’s youths with subliminal messaging in hit songs.

It’s testament to the song-writing craft that the lyrics’ innuendo is somehow still vague enough that kids and inattentive parents could plausibly think the song is about a guy sneaking into his girlfriend’s house to avoid her parents, despite “running my hands across your cheeks” being one of the earliest lines. And while the DuJour tracks veer into actual ribbing territory, there’s still evident affection for the music being referenced; understanding the appeal while heightening the genre’s sexually suggestive cheese. The film wouldn’t work if the songs of either featured group were trash and not endearing earworms with strong hooks.

It’s not surprising this aspect succeeded, because the producing and songwriting team was a perfect collection of established talent who knew how to make pastiche songs legitimately good and catchy. Among them were legendary R&B hitmaker Kenneth ‘Babyface’ Edmonds, Jane Wiedlin of The Go-Go's, Counting Crows frontman Adam Duritz, and Kay Hanley of Letters to Cleo, who also sang Josie’s vocals for Rachael Leigh Cook to convincingly lip sync. A crucial contributor was the late Adam Schlesinger, of Fountains of Wayne, who died of COVID-19 complications in 2020. A future Emmy winner for his work on Crazy Ex-Girlfriend, he was then a recent Oscar nominee for his title track for That Thing You Do!, the Tom Hanks-directed film about a fictional one-hit wonder band in the 1960s.

While the soundtrack was certified gold in the United States, Josie bombed at the box office, grossing not even half of its reported $39 million budget worldwide. Barely aiming the marketing beyond teens and younger seems to have factored in, and the mixed critical reception likely didn’t help. Not dissimilarly to Paul Verhoeven’s sci-fi war epic Starship Troopers four years earlier, Josie is a satirical work that also operates so well as an example of the story sandbox it’s playing in that the deliberate satirical intent was somehow missed, or outright misinterpreted, by some critics of the day.

“Josie is an indelible early 2001 time capsule, but also feels of a piece with the later meta stylings of Phil Lord and Chris Miller, whose 21 Jump Street and The LEGO Movie also walk a fine line between enthusiastic adaptation of an intellectual property and more cynically questioning their very existence”

The inordinate degree of product placement was commonly criticised, with the idea the filmmakers were hypocritical in sticking major corporation logos in most backgrounds, considering the plot. But that complaint falls apart when the product placement running gag is used to such blatantly absurdist ends, like Evian signage in an aquarium tank or a shower inexplicably plastered in McDonald’s branding. According to the directors in a 2017 Buzzfeed interview, none of the companies paid to be featured, and Gap turned them down after realising they’d be poking fun.

In 2021, the film’s vision of a corporate dystopia takes on new shades. Advertisers don’t even need to bother with the subliminal element anymore, when Twitter accounts for restaurant chains insidiously speak in the first person and Instagram influencer culture allows brands to cosplay as ‘genuine’ people. You could be reading a long post rhapsodising about a subject, seemingly sincerely, only to encounter an abrupt switch to selling you something. Josie and the Pussycats is the best movie ever. Join the army.