Kristoffer Borgli’s new film A Place We Call Reality was originally meant to be a Lil Peep video, and went backwards from there

In Kristoffer Borgli’s A Place We Call Reality, the Norwegian director stars as himself, hopelessly searching for meaning, surrounded by perfume ads that cause him to self-reflect and ultimately come to the conclusion that his life means nothing. What begins as an existential crisis ends as a quest for enlightenment in Los Angeles.

He moves to LA at a time that the city is on fire, alone and afraid. The first familiar face he sees is Jeff Goldblum – naturally Borgli asks him what the meaning of life is, and Goldblum offers a one-word answer.

After attempting without success to engage with the healing services on offer across the city, late one night on a YouTube deep dive Borgli comes across a Taiwanese bodybuilder called Frank Yang. Fascinated by the enigmatic muscle museum’s approach to consciousness, Borgli pays Yang an “ungodly amount of commercial earnings” to come and stay with him. There begins a violent, humiliating, and psychedelic journey into enlightenment.

We spoke to Borgli – who also directed 2016’s brutal meta documentary DRIB starring Alexandra Marzella – about LA’s healing scene, the meaninglessness of life, and how A Place We Call Reality would never have been made if it wasn’t for Lil Peep. (Also watch the full film below). 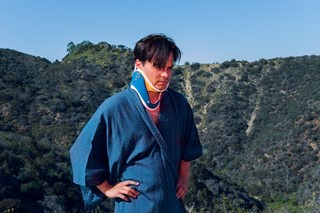 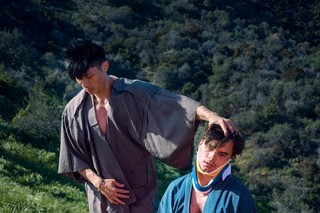 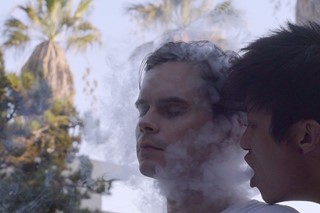 How did it feel to realise that your life was utterly meaningless?

Kristoffer Borgli: It’s something probably most people have felt or feels. The less you have to worry about the base levels in the hierarchy of needs, the more time you have to think about the more complicated issues regarding life itself. Since I have a more or less stable life, knock on wood, these are my worries. We always have room for worries, and we will just fill that room with new things once a problem is solved. It’s kind of like what they call a “dessert stomach”, we also have a “worry brain”. If the worry brain is well fed with concrete problems – hunger, safety, love, etc – then it doesn’t need to go all existential. When people achieve more and have less concrete problems the worry brain needs new issues and they tend to get more complex, unsolvable and depressing.

You give yourself obstacles to keep you under the illusion of meaning – writing a novel, making a feature film, building a career, generally reaching your goals – these things that once achieved we think might disintegrate the worry brain, but you end up feeling the same with a new set of worries. I’m not saying I’ve achieved all I want in life to get to this conclusion, but I’ve ticked off enough on my personal to-do list to get a sense of how little they affect the amount of worries I have. They just change.

What’s your least favourite ad you've ever seen and why?

Kristoffer Borgli: Probably something I made myself when I was desperately worried about base level needs.

Kristoffer Borgli: Schopenhauer called the post-orgasm moment of clarity as "devil's laughter" because it's when we realize we’re slaves to a biological imperative uncaring of our happiness. So maybe if it was an endless “job” then it would make it meaningful. But that would be a zero sum game.

Did you meet many other people like you in LA, people who needed to cling onto some sort of belief system?

Kristoffer Borgli: What’s interesting about LA in terms of existential worries is that since it has a high concentration of people who are consumed by ambitions there’s also a strong “market” for its cures. Meditation centres, healing crystal shops, legal and illegal drugs, strange religions and cults, mentally cleansing juices. Nobody is buying your script? Buy a “career candle”.

“Since it (L.A) has a high concentration of people who are consumed by ambitions there’s also a strong “market” for its cures...Nobody is buying your script? Buy a ‘career candle’” – Kristoffer Borgli

How did you come across Frank? What attracted to him, on your laptop screen?

Kristoffer Borgli: I discovered him from YouTube somehow probably more than a year ago. I just couldn’t really categorise him and what he was doing, but I was really intrigued. Is he trolling? Is he a genius? I kept watching to try to “figure him out” but I never really could. He’s now one of my best friends and I still don’t really know.

How much is an ungodly amount of money that you paid Frank?

What's the story with Lil Peep? Can you elaborate on how he's a part of this story, and did you know him well?

Kristoffer Borgli: If it wasn’t for Lil Peep this film wouldn’t exist because I was making something for him and the day we were supposed to shoot he had stayed up all night doing LSD. When he showed up to set he was no longer interested in doing the idea I had wrote. I really like him and the music he made and I was just saddened that it wasn’t working out – we didn’t fight about it, but we had to stop the production. Since we already had a whole film crew and a location ready to go I decided to go up on the roof and have Ben Mullen (the DP) film me dancing like a madman with the Los Angeles skyline in the background. I had a vague idea about making something about meditation and becoming enlightened and got the urge to just start shooting that. The epilogue part of A Place We Call Reality is what was shot that day, and the rest of the film sort of got made backwards from that point.

Did you actually do the spinal practice with Frank, and could you genuinely not walk?

Kristoffer Borgli: Haha, no. One of the key aspects of this film was to try to make something that started off as a vlog – a true personal essay about me and my life – and then have that gradually transform into something more absurd. And hopefully not really feel when that shift happens. In an interview David Foster Wallace paraphrases Wittgenstein saying: “the most serious and profound problems and questions can only be discussed in the form of jokes”, and the questions of meaning is something I’m not equipped to answer but have tried to discuss and render into an experience containing a (hopefully) enjoyable mix of jokes, absurdity and truth. Take away what you want from it, but it’s mostly scripted and performed.

What are you smoking throughout the film?

Kristoffer Borgli: There’s a split second where we reveal the content of what we smoke in the film one can freeze frame.

Do you really believe that “everything is art”?

Kristoffer Borgli: I don’t even know what that means, I do know that doing this as my first “acting” gig and on top shooting in a real museum without permits in front of strangers made me a little bit insane and say things in character.

Do you miss Frank?

Kristoffer Borgli: I did when he left back to Taiwan, but he moved here about two months ago and I see him all the time.

Should I move to LA to find my enlightenment?

Kristoffer Borgli: Yes, please do, I can guide you!