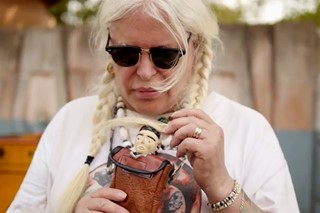 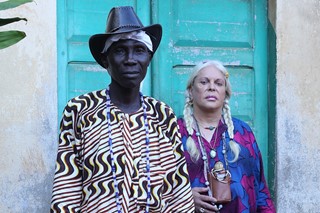 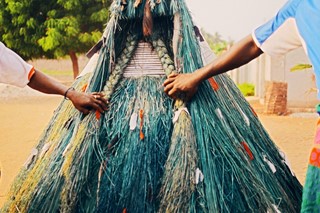 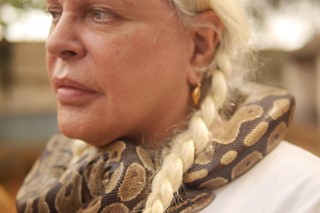 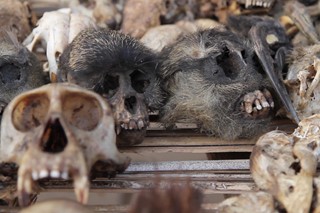 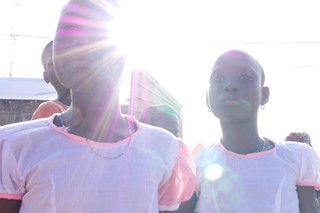 Genesis Breyer P-Orridge is the expert transgressor who has been at war with culture since the 1970s. Part artist, part musician, part cultural engineer, their incarnations have included; ‘wrecker of Western civilisation’, inventor of industrial music, disciple of William Burroughs, acid house pioneer, muse to Marc Jacobs and devout believer in unconditional love.

In maybe their most daring undertaking, Genesis and h/er late wife Lady Jaye began a process of mirroring each other’s physical forms, undergoing $200,000 worth of plastic surgery (including matching breast implants on Valentine’s Day 2003) and briefly experimenting with hormones. This became their Pandrogyne project, an exploration of love and gender that pushes against the very limits of binary identity.

H/er interest in reincarnation and the mother story of humanity has led h/er to Tibet, Kathmandu and most recently Ouidah, Benin, West Africa. There s/he was serendipitously initiated into the age-old ‘Twin Fetish’ – a series of sacrifices and ceremonies within Vodoun that activates a dead twin’s spirit. In their case, the spirit of Lady Jaye. This uncanny encounter is documented by Genesis’s friend and collaborator Hazel Hill McCarthy III in the film ‘Bight of The Twin’, which Genesis discussed with me ahead of its online release on Boiler Room.

How did you decide to make a documentary about Benin?

Genesis P-Orridge: About two years ago, while Hazel was visiting us, she showed us images of these incredible costumes online. They were like Leigh Bowery on DMT! Of course, she said that we should go see them in the flesh. We had no money but she said she’d take us, because we’d taken her to Kathmandu three years before. That was the twin festival in Ouidah, so that’s how we ended up going. We didn’t go to make a documentary. We just took cameras because that’s what we do, we always try and document life.

And you somehow ended up being initiated into their twin cult yourself.

Genesis P-Orridge: Yes. We didn’t do any research before we went – lazy buggers that we are – so we were completely open-minded when we got there. We knew nothing about the twin phenomena at all. At the end of our first day there, one of our translators invited us back to his house to have dinner with his family, and his father, Dah, turned out to be the high priest. None of them knew who the hell we were, we were just white people, but he looked at me and said to his son, “tell him, ‘you had a twin, but she died, and you’re wearing her gold earrings’’’. Now, my hair was down so he couldn’t see any earrings, but of course, to me that meant Jaye. We all just sort of looked at each other and went, ‘Oh shit, this is getting freaky already, and we’ve only been here 24 hours!’

In the film you make a doll of Jaye...

Genesis P-Orridge: They told me I needed a Jomeaux, which is a doll made from the baobab tree that’s like the transmitter/receiver of the twin that’s gone away. We ended up being accepted into this matriarchal cult, of twins, that was all women who’d lost babies, and they invited us into their temple, saying prayers to Jaye. As the twin story grew we realised that this was something very secret, that no one had ever really come across or documented. Of course afterwards Hazel said she’d taken me in the first place because things like this happen to me. She could have told me! I think I’m going on holiday and then the next thing I know we’re in this documentary making dolls of Lady Jaye!

“One day we were sitting together, we were actually tripping on ketamine, and we were discussing DNA and everything we could think of that might explain the strange alienation that we felt from society’s options’’ –Genesis P-Orridge

I found the parallels between this twin cult and your Pandrogyne project with Lady Jaye interesting.

Genesis P-Orridge: You know, we were lucky. We grew up with amazing people. Brion Gysin, William Burroughs, Derek Jarman, and so on, but Lady Jaye is without doubt the most remarkable. She was the first person we met who never once, even for a second, offered a limitation on doing. It was always, ‘yes fuck it, why not!’. With Pandrogyny, we weren't trying to look like exact twins, cause that's not the point. The point is to just become enough of a mirror of each other to say that you've dissolved the previous being, you’ve become the Pandrogyne. I can remember one day we were sitting together, we were actually tripping on ketamine, and we were discussing DNA and everything we could think of that might explain the strange alienation that we felt from society's options of who to be. We came to the conclusion that it’s not about gender, it's about a much deeper form of identity that’s not binary. It’s about evolution, the reclamation of our own physical, mental and behavioural self, and it has nothing to do with either or at all, but just what are the possibilities of what we can become, do we even have to think in terms of even human?

This idea of evolution could be applied to your work too. There are a lot of cultural icons who become famous for one thing, and then they go on doing that forever.

Genesis P-Orridge: Oh yeah the formula, as its now called. Can you imagine being The Stones? Getting on stage to play ‘Satisfaction’ every night? That's my hell!

Whereas your approach is almost the polar opposite of that.

Genesis P-Orridge: Every few years you have to change your strategy. You have to look at how the world is mutating, and mutate. Not in the same way but in parallel. We were talking to a well-known curator just last week in LA, and they called the art world an industry. We were shocked, but that’s what they see it as. The curators, the gallerists, the collectors, it’s an industry that they utilise to make money. That means that you have to make art that you just believe contains information, regardless of what the industry thinks. That’s what we did with COUM, the art world hated COUM, and now it's in the Tate Britain.