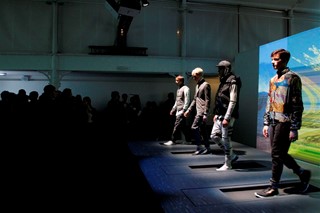 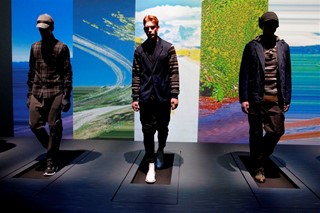 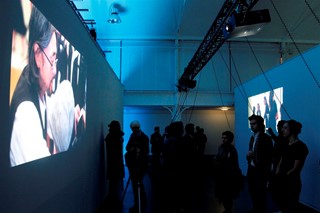 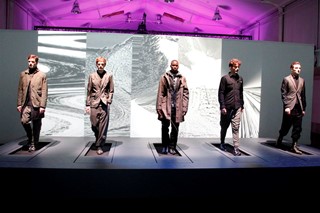 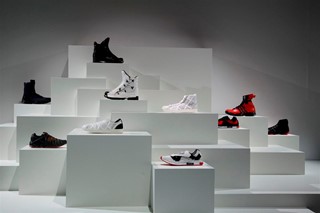 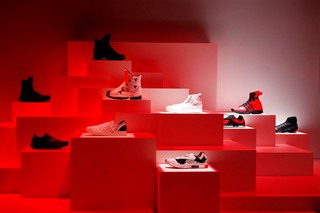 In homage to the last decade of successful collaboration between Japanese mastermind Yohji Yamamoto and German sportswear moguls Adidas, last night saw Y-3 gather together the tired patrons of the menswear presentations for a special preview of their latest menswear collection. Entitled 'Escape', this season has taken its inspiration from the outdoors and what pieces of clothing gracious Gaia might require of you - be it blazers and parkas in deep greens and blues or sarouel-style sweatpants and wool trapper hats. Models appropriately strode forward on an interactive treadmill installation with overlaid film footage of open roads, broad meadows, blues skies and expansive valleys projected across their bodies, and people bustled around earphones suspended from the ceiling for the evening also saw the premiere of This Is My Dream, a special documentary exploring Yamamoto's approach to his work with Adidas and his process of design. Dazed Digital spoke with Dirk Schönberger about the presentation and the bonds between Yamamoto and Adidas.

DD: What do you think it is about Yohji Yamamoto that led to many years of quick, organic creativity with Adidas?
Dirk Schönberger: He is unexpected. He doesn't care about what is hip now or what is trendy now - he is doing something on his own. He has such a footprint. He's still surprising everyone every season. There are not so many designers who do that.

DD: What I most admire about him is that he has created an intersection where so many people can meet; his delicate variations on a theme don't shamelessly target a demographic but they instead invite a collection of individuals.
Dirk Schönberger: Yes, and of course he is the master of the silhouette and he has an understanding of the street. He never produces an old costume. But I cannot talk for him; this is what I felt before I even thought of becoming a fashion designer. There was no sense of false extravaganza.

DD: Where do you think that the collaboration will continue to progress?
Dirk Schönberger: I'm very much hoping that we will create some extraordinary things together. And to make future-sports silhouettes together. I think that when you have a collaboration going on for so many years, you don't even have to consider exactly where you want to go; you just promise that you'll both go ahead together and bring everything you have to the table.