The third edition of the Fashion in Film Festival promises to be an extravaganza of costumes, colours and sets via rare screenings of American and European films. 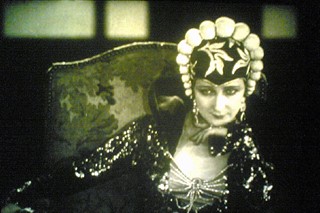 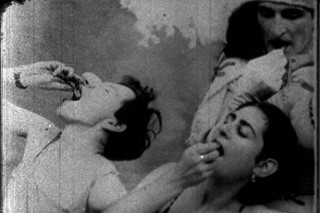 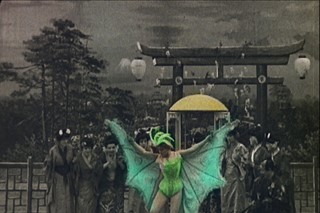 The biennial Fashion in Film Festival (FFF) is kicking off across leading London venues this week. Entitled “Birds of Paradise” this edition will be an extravaganza of costumes, lights and colours. The rich programme features some rare screenings of early silent films and underground movies from the 1940s-1970s, including works by Kenneth Anger and Germaine Dulac. Two installations will also be shown, one by the award-winning Jason Bruges Studio and the other designed by Mark Garside after Thomas A. Edison’s kinetoscopes. Dazed Digital interview Curator Marketa Uhlirova and Associate Curator Inga Fraser.

Dazed Digital: What prompted you to explore this year’s theme?
Marketa Uhlirova: I remember one defining moment: watching Jack Smith’s Flaming Creatures, I knew immediately I wanted to scheme around that film one day and thought of Kenneth Anger straight away. Later I became aware of the serpentine dances in early cinema and all the imitators of Loie Fuller like Crissie Sheridan and Lina Esbrard. These female dancers were some of the very first subjects of cinema, and many of the films were hand-coloured and stencilled. There was a level of intensity and sheer pleasure in the spectacle of dress and artifice that matched Smith and Anger’s work.

DD: Was there a film that you discovered that truly amazed you for its costumes and sets?
Marketa Uhlirova: There have been quite a few really special moments like being introduced to the work of José Rodríguez Soltero. Then there is the insane work of Steven Arnold. I have actually thought of amazement as one of the criteria that would distinguish a ‘maybe’ film from a ‘definitely’ film. Rapsodia satanica by Nino Oxilia was one of those moments.

Inga Fraser: For me it was the extraordinary dance sequence at the end of one of the early films in our programme, Le Farfalle (1907). Initially a straightforward Orientalist film, it suddenly breaks from the narrative and bursts into this fantastically expressive serpentine dance. The dresses are stencil-coloured and the effect is just electric. I also loved Moulin Rouge, it is completely delirious at times!

DD: Which is the rarest film that will be screened?
Marketa Uhlirova: Everyone should check out Secrets of the East at the BFI; the print is coming all the way from Tokyo. I doubt it has been shown in the UK, at least most probably not since 1928. We are also really thrilled to be screening a brand new print of Jack Smith’s Normal Love at Tate Modern – especially because Smith is so crucial to the programme.
Inga Fraser: Germaine Dulac’s Princess Mandane is certainly worth a mention as a film that is hardly ever screened. It is also a fairly mainstream feature which is a rarity in Dulac’s filmography - she is obviously best known for her surrealist film work.

DD: Do you feel that some of the rediscovered masterpieces featured in the programme can still teach us something about elegance, style and taste?
Marketa Uhlirova: The 1910s is a decade when we see the emergence of the cinema for the bourgeois –films specifically designed to appeal to this class through their length, narrative sophistication, décor, costuming, artistry and other aspects. One of the directors we feature, Cecil B. DeMille, is a glaring example of a very visual director, one that is intensely preoccupied with costume and décor. And these did have a reciprocal relationship with the fashions and trends in interior design of its day. Sumiko Higashi wrote an excellent book on DeMille where she talks about how he deliberately used images of material splendour to stimulate people to buy. This in turn is something that Kenneth Anger was interested in, and not only his famous exposé Hollywood Babylon I and II.

DD: In which way will the Kinoscope Parlour installations and the Hemline: the Moving Screen Artwork complement the festival programme?
Inga Fraser: The Kinoscope stretches our exploration of costume as cinematic spectacle to revisit the spectacle of cinema itself in the early period. Jason Bruges Studio’s Hemline also expands on the experience of cinema but conceptualises costume in motion in a more sculptural way. Jason Bruges Studio have taken their cue from what we know about Loïe Fuller’s technological sorcery, and from what we see in the early filmed serpentine dances, and produced a phantasmic moving light sculpture for the Somerset House.
Marketa Uhlirova: It is really important for us to include in the festival the work of contemporary artists, designers and image makers, if only because it makes us see the historical material we feature in a new light. It puts us all on the spot a bit more; it raises the game and it certainly raises new kinds of questions that we would not otherwise even think to ask ourselves.

Fashion in Film Festival is on across leading London venues, 1st-12th December 2010.