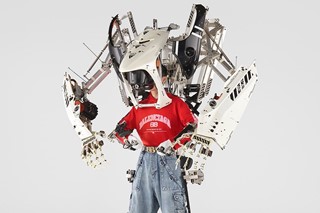 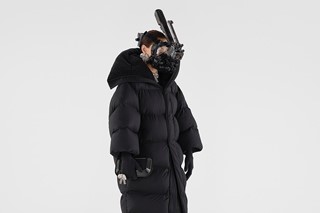 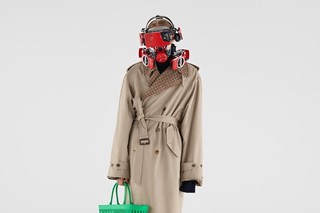 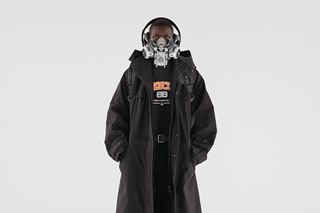 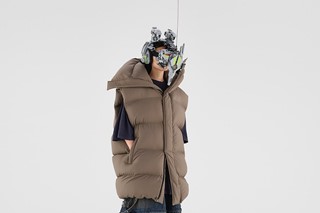 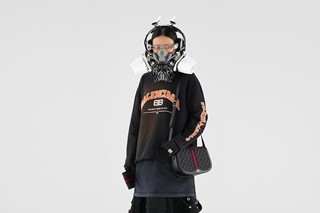 As megatron musician Arca dropped “Prada” and Kim Kardashian donned a custom Thierry Mugler cowbot costume, this was the week that fashion faced its I, Robot reckoning. Existential anxieties came to the surface as soon as Balenciaga unveiled its campaign for SS22, complete with cybernetic face coverings and exoskeleton suits designed by Ikeuchi Hiroto. Granted, it’s not the first time that Demna Gvasalia has prophesied on end times, sending post-apocalyptic garb down water-soaked catwalks and recruiting deep fake news anchors to present doomsday TV coverage. But in a culture obsessed with invisible techno-dystopias, like the metaverse, CGI Mark Zuckerbergs, and whatever else it is that lurks on the blockchain, there’s something quite retro about the fashion-bot. After all, Kim didn’t look scary, she looked like a pin-up from a B-side horror flick, and Balenciaga, with all its eyelet-strewn, mall goth jeans was really more cyberdog than cyber-destruction. Nihilistic nonetheless, but at least these robots are somewhat tangible and can’t be sold as an NFT.

In other spooky news, celebrities pledged their allegiance to TikTok gags and erm, each other, this Halloween, dressing up as Voldemort, Baby Yoda, and Kravis. Chloë Sevigny returned to her “Sugar Kane” days, staging a hostile takeover of the Marc Jacobs’ offices as Gucci enveloped Los Angeles’ Hollywood Boulevard with its schmaltzy Love Parade, inviting curve models to walk the runway for the first time in 100 years. Over in Glasgow, where things are decidedly less glam, but far more prescient, fashion organisations united with a COP26 call to arms. For everything else that may have passed you by this week, click through the gallery below.

The clock had barely struck 00:00 on November 1 and Versace had already begun to ring in the Christmas period, dropping a Stella Maxwell-fronted campaign as the last dribble of celebrities were still posting their Halloween costumes. This Christmas, Donatella also recruited the support of team Italia’s figure skaters, with Rebecca Ghilardi and Elisabetta Leccardi whizzing around a rink, etching Versace into the ice with their Medusa-branded skates. Watch the campaign here.

Following in the footsteps of Thebe Magugu, Telfar, Givenchy, and Craig Green, Ann Demeulemeester will debut its next collection at the 101st edition of Pitti Uomo in Florence on January 12. Having returned to the business this year – at a consulting level – the show will honour the designer’s 40 years in the industry and bolster the label’s repositioning as a luxury fashion brand.

Diesel launched its Second Hand project this week, restoring and renovating pre-worn pieces, which were sourced via its buyback programs earlier this year. 900 pairs of reconditioned jeans are available for purchase in a handful of Italian stores and online throughout Europe, with each garment stamped with a big red logo across the bum. Watch the brand’s “instructional” video here.

Together with Byronesque, Machine-A, the Soho boutique known for incubating emerging fashion designers, is launching a curated archival edit, dubbed Machine-B. Featuring the likes of Rick Owens, Raf Simons, Margiela, and Gareth Pugh, the collection will sit alongside new, up-and-coming designers including Kiko Kostadinov, GoomHeo, and Stefan Cooke. Check it out online here.

MONCLER SETS UP SHOP IN SELFRIDGES

In a snow-capped corner curated by David Fischer, Moncler launched an immersive pop-up store, featuring key pieces from Moncler Genius collections with JW Anderson, Craig Green, and Hiroshi Fujiwara. Running until December 4, the space is home to a dedicated RTW collection and new collaborations courtesy of Kanata, Casio, and UNO. Head to Selfridge’s flagship or online to find out more.

CHANEL TOOK A CRUISE TO DUBAI…

… sort of. The French fashion house debuted its 2021 Cruise collection in Dubai’s Creek Harbour district. Virginie Viard was said to be inspired by Jean Cocteau’s Testament of Orpheus for this one, sending out a fringed and frayed monochrome collection which riffed on 60s silhouettes with a punkish bite. Think CC-embroidered, leather mini skirts, saggy, open-knit sweaters, jewel-encrusted chokers, and velvet corset dresses. The collection is available from November 9 in Chanel boutiques worldwide.

AHLUWALIA WANTS THE CLOTHES YOU DON’T

Ahluwalia and Microsoft have created an AI-backed platform – Circulate – where users will be able to trade in their old clothes and, in return, receive points that can be redeemed on Ahluwalia’s website. It means the designer is inviting the UK to contribute, quite literally, to an upcoming collection. “In both Indian and Nigerian cultures, it is tradition to pass clothes and personal effects down from generation to generation to be cherished. I personally have lots of special items from different family members that are very dear to me. This ritual was a key inspiration when developing Circulate,” she says. Check out Circulate here.