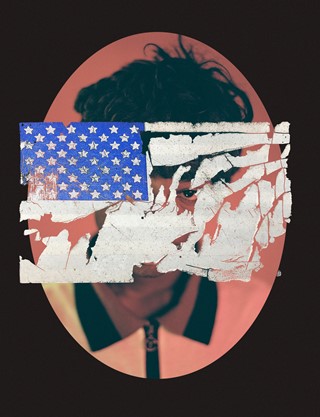 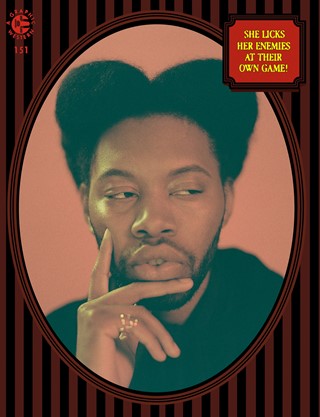 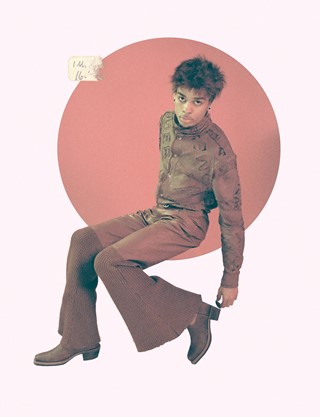 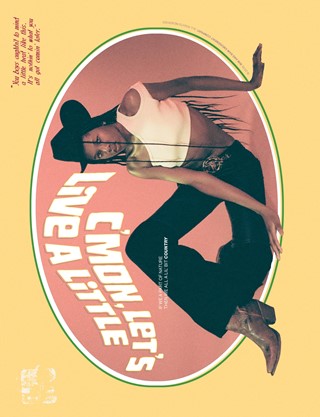 Taken from the autumn 2019 issue of Dazed. You can buy a copy of our latest issue here

At New York’s Irving Plaza in February, hundreds of immaculately dressed bodies packed tightly together in a moshpit before a stage. They were in attendance, not for a concert, but for the latest Telfar show – courtesy of designer Telfar Clemens and creative director Babak Radboy.

In America’s current, terrifyingly unstable political climate, Telfar’s AW19 collection saw the duo tackle the poignant idea of ‘country’, in collaboration with queer playwright Jeremy O. Harris, who has been creating space for those considered ‘other’ in the world of theatre via his acclaimed off-Broadway plays, Daddy and Slave Play.

Opening the show, Harris read a scripture penned by the trio, before being spirited away by the crowd, lifted high by the guests below. “It’s crazy because Babak and Telfar work so similarly to me, I wondered how we hadn’t collaborated sooner,” Harris reveals, calling in from Fire Island with Clemens and Radboy. When we speak, the trio often chatter over each other, near-perfectly in-chorus.

In tune with Harris’s confrontational theatrics, Telfar has been creating a new narrative in Americana for over 14 years, offering affordable clothing that is unisex – before it became en vogue – and putting black bodies at the forefront of an industry that has long ignored them. Previous collections have seen the brand repurpose logos of US stalwarts like Budweiser, pay homage to the Black Lives Matter movement, and undertake what must be their most mammoth collaboration to date: the creation of over 12,000 uniforms for fast-food chain White Castle.

Backstage at the AW19 presentation, photographer Jason Nocito reimagined the show’s cast – including British-Nigerian singer Oyinda, who appears here as a resplendent, retrofuturistic cowgirl – as old western paperback cover art. “Creating that imagery is important, because the world didn’t accommodate us,” Radboy says of the images you see on these pages. “We’re always trying to project both backwards and forwards for people that don’t necessarily exist, but can.”

Jeremy O Harris: I’ve always been aware of Telfar, because I was that kid in high school who was watching (Ryan Trecartin’s) I-Be AREA, and Telfar was one of the most dynamic figures to shapeshift around this scene I was curious about. All of my friends in LA were fashion and art types, so I’d see people walking around in these really amazing, sexy outfits – I would say, ‘Where the fuck did you get that?’ and it was always Telfar. I was so broke that even the bags that people carried around were aspirational for me.

Babak Radboy: Telfar doesn’t activate feelings of insecurity, which fashion is all about, and it doesn’t make people feel inadequate or insecure. We are peers with the customers, our models and audience. There is no separation – we look the same as them. That’s the kind of brand we are. Even from the straightforward example of a bag: the idea of having a bag that people are proud to have, but isn’t expensive, creates a different kind of dynamic. Generally, a bag tells you, ‘I have this kind of apartment,’ or, ‘I’m a 30-year-old woman and I’m acting like one.’ We have a bag that fulfils those ideas, without any of those references.

Teflar Clemens: A bag is like an advertisement for a type of person, but ours is for everybody and anybody.

Jeremy O Harris: With this brand you have disrupted the alienation of fashion. You’ve thrown away the alienation of bodies. There are certain bodies that aren’t allowed in fashion, not just black and brown, but bigger, smaller, taller and shorter. Traditionally, everyone feels alienated in fashion, even if it’s just educationally, but if you go to a Telfar show, you don’t need any of that. You have this exchange of knowledge and inclusivity activated by the fact that there are so many different inputs and outputs around you. That’s one of the reasons why I’m drawn to collaborating with these lovely people.

Babak Radboy: We play around. We don’t necessarily want to have a traditional runway show in the context of fashion, because I don’t think that’s what we do or who we are in the first place. The show we did before this one (SS19) could have gone wrong in so many ways. (laughs) We really relied on the presence of the models and some pretty complex choreography, but they all did it perfectly.

“We’re always trying to project both backwards and forwards for people that don’t necessarily exist, but can” – Babak Radboy

Teflar Clemens: For AW19, we were looking at the many different things that ‘country’ can mean in the first place, and what it means to us personally in the current state of 2019.

Babak Radboy: The word ‘country’ is a pretty straightforward (one) to design around. We’re interested in how this word has two different meanings that fight against each other. The idea of nation, and the idea of the land itself.

Jeremy O Harris: There was a lot for me to latch on to that became really exciting. There was a lot of writing and visual imagery that led me to think about pure colonialism, and ‘first men’, and who these characters were. It’s exciting to think about how psychedelic it must have been wandering through an unknown land as a ‘new’ person. Once we figured out a lot of the ideas and what that text would be, they told me, ‘You know you’re opening the show, right?’

Babak Radboy: For all the shows that we’ve done, this was the most direct, from the point of writing the words to Jeremy performing it. Everything connected.

Jeremy O Harris: The shape of the show was super-exciting on a structural level as well because, logically, it’s legible – the spoken-word is legible and even my performance is a vaguely legible thing as an orator, a preacher, or maybe a divine other that leads you somewhere. To go from this to an amazing song by a fucking goddess (Oyinda, who performed at the show) and end in moshing – it tells a story of destruction, and how legibility can slowly become illegible.

Teflar Clemens: We literally sit down and write the clothes out, which is why I think they’re understandable in a semiotic way, because they can be described in words. From there, we usually write a polemic essay and share with our collaborators so everyone can get on the same page. They can do whatever they want within that, but we’re all driven by the same thing.

Babak Radboy: That was the first thing we said when we met: this (theme) is not about a conversation or a conflict, it’s an antagonism. This is about existence and presence. We’re not entering into a social conversation, we’re physically taking up space – (using) the image of the frontier and the colony is about a material mission to exist and let that existence be the statement.

Jeremy O Harris: What excites me about the work happening at Telfar is there is no need to respond to things (that are) happening right now, because it recognises that our history is about reshaping and reforming. It takes what the world throws at us and repurposes it into something more beautiful than anyone can imagine. It takes the blood, spit, cum and piss, and reforms it into the armour we use to walk into the world again. Not in response to anything, but just because it’s there. At the same time, it doesn’t pretend that these things aren’t always there.

Babak Radboy: Our survival depends on these things, it’s not just motifs we are pulling out of the news – we’re embodied in them. Whatever the politics of the project, it’s not an intention, it’s not so elective. It’s really baked in.

Jeremy O Harris: There’s an amazing Morgan Parker poem called “Now More Than Ever”. It looks at the things white liberals say in particular: ‘It’s like now more than ever, we have to be aware of blah, blah, blah.’ But the point is, if you are black, if you are brown, if you are queer, there is no ‘now’ that is different from yesterday. The only thing you need to be focused on is to keep breathing, keep moving, and keep making. That’s what I think is great about this work in relationship to the current political moment.