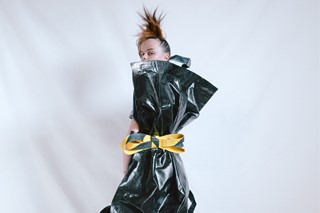 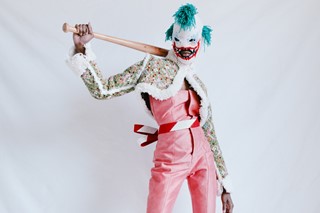 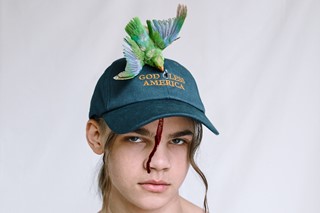 Taken from the summer 2019 issue of Dazed. You can buy a copy of our latest issue here

“I’m not confident enough to just create work,” says Fashion East’s newest recruit Gareth Wrighton, sitting in a cafe in east London. “I like situating it on a body; it gives it purpose.” In the past, Wrighton has tried his hand at photography, styling, art direction, tailoring, knitting and even computer modelling, but it was while studying fashion communication at Central Saint Martins that he first took to “chopping clothes up, sewing them together” and selling them through a cheap-and-cheerful online shop. “It was a huge turning point in my career when I became obsessed with garments like a sculptor (would).”

After a final-year project which had him maintaining “complete control over everything in the image”, Wrighton’s approach softened after graduating to make way for collaboration. His former coursemate Ibrahim Kamara’s exhibition, 2026, had won significant acclaim, and Brooklyn arts platform Red Hook Labs offered Kamara, Wrighton and photographer Kristin-Lee Moolman a space to make and show work.

“I blinked and the next thing I knew I was in South Africa for three months, completely out of my depth but having a blast,” laughs Wrighton. The result was Soft Criminal, a photographic installation and show brought to life with a cast of 22 fictional characters from the African diaspora. Next came the call from Fashion East’s founder Lulu Kennedy, and a deceptively simple, 12-look AW19 collection that secured Wrighton’s status as a designer. Crewneck sweaters carried pictures of the California wildfires and Chelsea Manning-leaked images of US soldiers firing at Iraqi civilians; a velvet school-style babydoll dress was paired with a tactical assault helmet.

“I wanted to play fashion week at its own game, almost. I wanted accessible garments, (but) when you dig deep they’re really dark.”

“I like the dystopian side of it, saying, ‘This is fab, but we’re all going to die’’’ – Gareth Wrighton

Questioning reality in a post-truth world, Wrighton embraces paradox. “I love that people always think of technology’s role in fashion as utopian,” he notes with a grin. “But I like the dystopian side of it, saying, ‘This is fab, but we’re all going to die.’”

Impending doom aside, Wrighton’s career blossoms with certainty; he’s finally set to move from his parents’ garage in Watford to forge a new makers’ community in the newly appointed Greenwich Peninsula Design District, which he hopes will “reimagine the world in our own way”. At last, a vision for a future we can believe in.

Gareth Wrighton is one of five winners of rent-free studio space in the Design District Space × Dazed on Greenwich Peninsula.

The Design District officially opens to the public in 2020