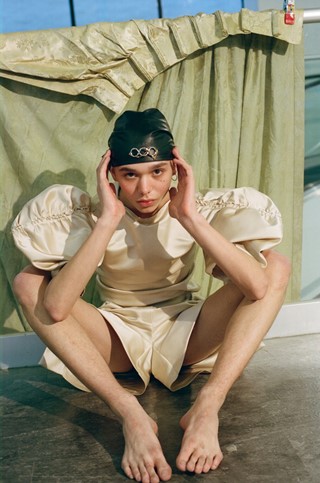 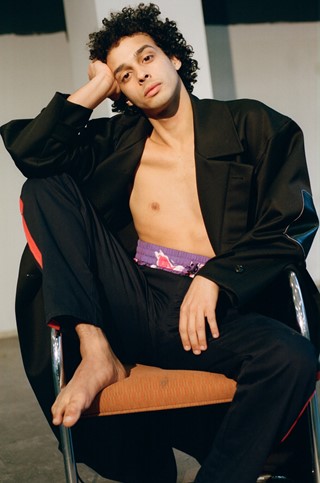 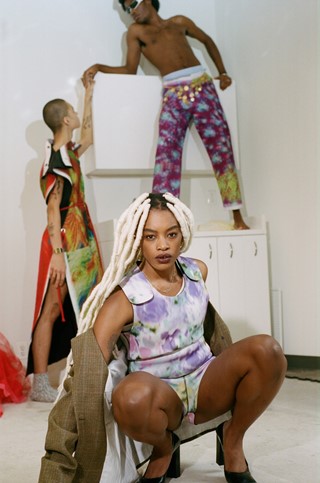 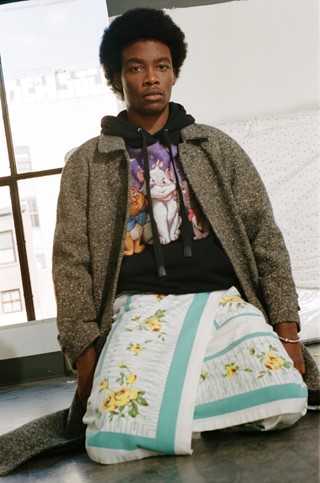 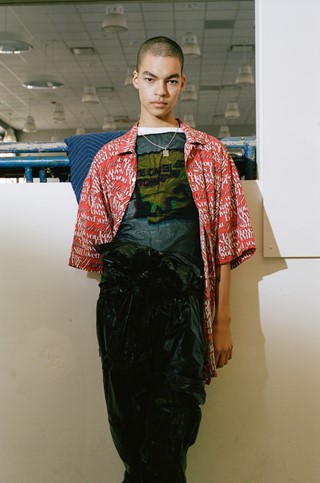 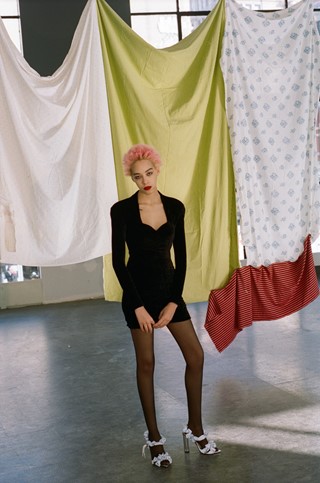 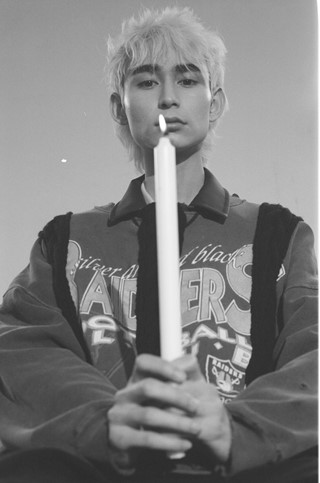 At a time when trans rights are more under threat than ever, the spring 2019 issue of Dazed takes a stand for the global creativity of the LGBTQIA+ communities and infinite forms of identity. You can pre-order a copy of our latest issue here, and see the whole Infinite Identities campaign here.

In an industry that’s been historically defined along the gender binary, New York-based LGBTQIA+ casting agency New Pandemics are leading the way toward truly inclusive casting. Mindful that empowering queer communities goes beyond representation, New Pandemics select their clients based on their past track record in activism, and channel ten percent of their own earnings towards supporting LGBTQIA+ organisations. “(New Pandemics) has given us a safe place to work, on projects driven by people we can identify with,” says artist Sage Martin, one of the agency’s breakout new faces. On the brink of a new era for fashion, meet the models of the agency below.

Debra Shaw in conversation with Mowalola OgunlesiAfter 20 years in fashion, the McQueen muse continues to set the agenda for the meaning of cult – she talks all-access diversity with breakout London-designer, Mowalola Ogunlesi

Artist and photographer Cameron Lee Phan is fascinated by metamorphosis, capturing the multitude of dialogues that ring through an individual. “Self-portraiture speaks to me because we are transformative beings and I find it necessary to document these shifts,” they explain. Self-imaging is a practice Cameron has been honing since they first picked up a camera at the age of 14, back in their native Texas: capturing themselves curved under lilac skies, or buttoning a shirt under the orangey tint of a New York dusk.

“Self-portraiture has been one of my artistic processes for self-discovery. It has also been a way for me to battle out extremely intense emotions that I didn’t know how to resolve.” As part of the New Pandemics family, Lee Phan is invigorated by bringing this emotion to photographs made by somebody else: “in front of the camera, I’m led by an intuitive feeling, and focus on locking energies with the photographer.” For Lee Phan, the biggest difference in being part of a more inclusive agency experience lies in the smallest details. “Having our pronouns listed on every call-sheet is a big one! How we identify is an integral part of our being, and it is important that we stress this level of respect to the people we work with.”

“Cinema will always be my first love, but I don’t wish to be labelled as a filmmaker or model, rather as an artist, free to explore all areas,” the ethereal Sage Martin declares. “My interests are based on creating, and filling my brain with knowledge.” This thirst for knowledge defines Martin, who, at the age of 18, is the youngest member of New Pandemics. “My age fills me with joy. I am happy to be young and have so much knowledge about the diversity of people, and I can continue to grow with it.”

Martin’s optimism speaks to a new generation’s tendency to compute their own difference as a superpower, not something to be afraid of. It’s a quality that shines in their work with genderfluid brand Lordele, where Martin can be found posing for the goddesses in heels and tiny skirts, comfortable in their nonconforming skin. “(New Pandemics) has given a platform for all of us to speak,” says Martin. “It has given us a safe place to work, on projects driven by people we can identify with. The focus is to give representation to often-unrecognised LGBT models, but I think it’s much more than that.”

When Rahm Bowen draws, they celebrate blackness. “With every new face, I’m thinking about the wide range of colours that make up the undertones, mid-tones and highlights visible in black skin, and all of our features that make us so distinctly beautiful,” they explain. “I love colours, people-watching, staying up to see a sunrise...” Bowen is a romantic at heart, and their work on paper and in front of the camera is about the joy of deconstructing preconceived categories.

As with their drawing, Bowen sees modelling as a vehicle which allows them to question ideas surrounding black identity – “colourism, gender, sexuality, and all other facets that are (usually) considered too unconventional to be explored”. New Pandemics has not only given Bowen a wider queer network, it’s also allowed them to feel powerful and special. “We get the chance to simply be ourselves and represent for people like us without having to conceal the parts that the industry may deem too non-conforming. (Normative casting) says that queer bodies are undesirable and unwanted if they aren’t cis-passing. ‘You’re seen, you exist’ is my message to those who are listening in.”

“(Normative casting) says that queer bodies are undesirable and unwanted if they aren’t cis-passing. ‘You’re seen, you exist’ is my message to those who are listening in” – Rahm Bowen

“MORE OF EVERYTHING!” is Nic Villarosa’s manifesto for change. “(Fashion is) not just about people on covers, but prioritising queerness, blackness, transness, disabled bodies – not bodies that fill quotas, but bodies that are truly given the opportunity to take up the space they deserve.” As a double major in film and human rights, Villarosa is impassioned by active change through culture, co-leading an initiative aimed at ending sexual assault on college campuses.

When he’s not thinking about human rights, or the nuances  of representation (“It’s the way you represent yourself based on your preferred expression of an identity, while at the same time being able to see something on screen, in a book, online, at school, at work, in your neighbourhood”), Villarosa dances. He goes to the forest on his college campus, near the Hudson, and films himself in nature. “Any other chance I get, I’m dancing. My friends know. I’ll sometimes just start dancing in their tiny dorms where it seems impossible to have space.” And he’s fired up about what New Pandemics can do to marry all of his interests, as well as providing a blueprint for other agencies like it: “We get to build the foundation for what safe, accessible, and community-based queer agencies look like.”

“The sadness is worth it. You’ll get where you want to be.” That’s what Sebastian Rosemarie, writer, model and activist, wants you to know. Online, their work homes in on this sadness. “I speak openly about my struggles with mood disorders, living with depression,” they explain. “Friends feel like it’s easier to talk about those things after seeing me be so open about my struggles.” For Rosemarie, activism isn’t just a tag or a word in a bio, it’s about wider engagement with the world through conversation. “Activism online means holding yourself accountable and hearing out different perspectives. Offline, it’s about being aware of how you move in the world, the space you access and creating space for queer PoC.” New Pandemics is the perfect home for Rosemarie, with ten per cent of the agency’s earnings funnelled back into groups which support the LGBTQ+ community, and new collaborators selected for their own track record in activism.“I think the power in New Pandemics is that we all come from different backgrounds, but come together,” Rosemarie elaborates. “We stick up for each other and stand together.”

Skater and student Julian Ruiz is feeling optimistic. “I love the corny phrase, ‘Live, laugh, love.’ When discussing my identity, I usually refer to myself as queer or gay, and I generally use male pronouns but I really don’t care! Gender’s going to be cancelled soon.” Having just moved to the east coast from Atlanta, Ruiz possesses the kind of wide-eyed whimsy a newly resident New Yorker exudes. He already seems pretty comfortable in his new town.

“Offline, I’m usually exploring the city with my friends, getting boba and skating,”, he says. “I want to spend more time writing poetry and creating art, more for myself than for it to be consumed, because it’s so fulfilling and can help me get more in tune with the person I am.” For Ruiz, modelling with New Pandemics is simply another way to express his beliefs. “There have been a lot of toxic ideas projected on to modelling,” he explains. “There’s still work to be done, but our trajectory is in the right direction. Modelling can express to others who we are, collectively, as humans: flawed and beautiful. It can express the fact that those two words are not mutually exclusive.”

“How are you, mentally? (This) is the question we all should be asking,” says Mecca Mozelle, who is using her voice to start conversations about mental health. “Taking care of our minds comes first, always.” As founder of the #imwithyou movement, an online initiative hand-crafted to offer advice on how to heal and open up about the ways we suffer, her work has already begun. When trans rights are under threat by governments, when gun violence soars, when racism is validated by the state, our mental health suffers as a result – and Mozelle’s work explores these intersections to understand them better. “We discuss the effects of tobacco, poverty and gun violence, but the one thing that led to the crisis around those topics is where we are mentally: this needs to be continuously discussed on larger platforms.”

This is why a “force” – as Mozelle calls it – like New Pandemics is about more than just the image. “For me personally, I feel as though being a model is not only wanting to be represented in the fashion world, but being active and using our platforms for a cause. I am thankful for the opportunity to be represented by an agency that supports everything about me as an individual.”

Twenty-three-year-old movie obsessive Anaury Peña knows the thrill of finally seeing yourself represented. “Had I seen what I was doing now when I was a kid I would have felt inspired, confident. I would have felt like there’s someone out there who’s unabashedly eccentric, lively, colourful. I would want to be just like them.” For Peña, modelling is about seeing that you really exist. And that’s what New Pandemics is here to do. “A lot of times it’s not simple to walk into an agency when you’re queer, because there is a lack of understanding about who you are,” he explains.

But real representation needs to go beyond just surface-level, and Peña cites designers like Gypsy Sport’s Rio Uribe and Virgil Abloh as examples of inclusion at every level. “(That’s) the kind of representation we need behind the designs, (extending) to models, crews and make-up and hair teams.” Besides modelling, Peña wants to act, he wants to explore – “to visit all 50 states, yes!” But most of all he wants to buy his mum a house, because representation is as much about sustainable economic support as it is about the image itself. “A house on the beach, on a mountain, on a lake. That’s the big dream.”