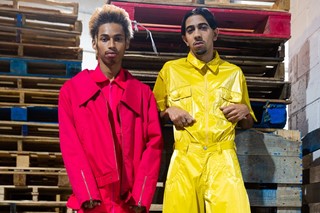 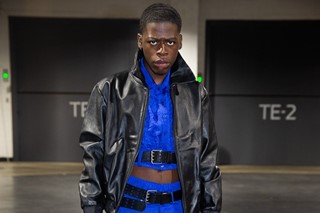 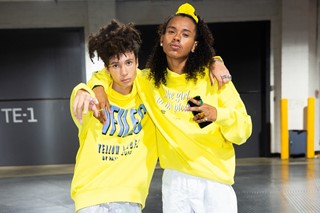 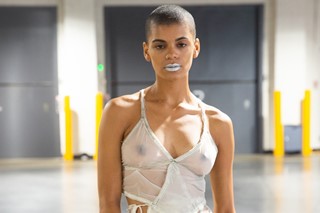 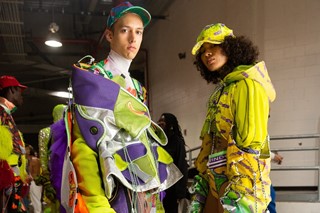 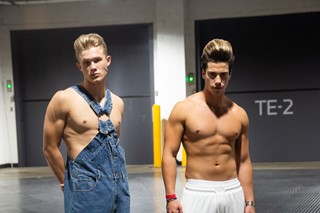 For the last nine seasons, Vfiles has kicked off New York Fashion Week with one of the schedule’s most hyped shows. Who could forget AW18, when Offset drove a yellow Lamborghini down the runway, or the time Young Thug stepped in adjust one of the models’ outfits? Obviously there were some pretty big moments this time around, too. Here’s what went down.

THERE WAS A CELEB KISS CAM

The show was held (for the second year in a row) at Brooklyn’s Barclays Centre, home of the Brooklyn Nets, and like at all your fave sports games, there was a giant ‘Kiss Cam’ in the centre of the arena. Two Vfiles cameras – one seeking out celebs and the other instructing the people it landed on to dance – saw VIPs like the legendary Amanda Lepore make it to the big screen.

Antwerp-based designers Windowsen and Shuting Qiu, Chinese label MARRKNULL, and Parsons alum Elena Velez were selected by a team of mentors, including Dapper Dan and Gypsy Sport’s Rio Uribe, to show their debut collections. Windowsen’s collection fused athleticwear with typically feminine styles, with mesh jerseys presented alongside flowing feather gowns, while Velez imagined a post-apocalyptic future by looking to the past as she repurposed military garments from WWII. “I think for a lot of people, when you talk about war in fashion, they get turned off instantly,” said the designer, “but I really want to revisit it in a respectful way, and look at the past as precedent for improvement.”

Elsewhere, Shuting Qiu was inspired by the lush and colorful markets of Morocco, creating a feminine collection that was all about silhouette – and prints on prints on prints. Sadly, the design duo behind VFiles Runway Winner MARRKNULL couldn't actually make it to the show. They were stuck in China due to a Visa issue, which was slighly ironic given the tourist-y motifs seen throughout the collection were really an ode to home.

…AND VFILES LAUNCHED ITS OWN LINE

The fifth designer on the line-up, Hood By Air alum Paul Cupo, presented VFiles’ debut ready-to-wear line, Vfiles Yellow Label. The collection was made up of blazers, mini skirts, and Dickies-style jumpsuits, as he channelled workwear in its most literal form. “When Vfiles called and said they wanted me to make workwear, I was like, ‘Okay, I’ll show you work!’" he explained post-show. Cupo envisaged children dressing up in their parents’ office clothes, with oversized silhouettes and deconstructed detailing featuring heavily.

VFiles wouldn’t be the same without a few celeb cameos, so it made sense that Lil’ Kim closed the show in a bright yellow dress with matching neon hair. While she didn’t actually take to the stage to perform, A-Trak was on hand to take over the party, and VFiles’ selected artists Barbieboy, Jewnique, and Danays made an appearance too. If you couldn't already tell, as always, it was lit.