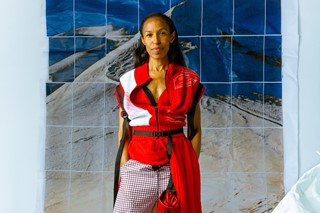 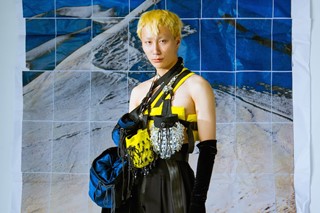 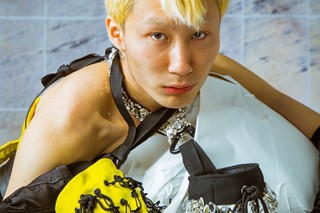 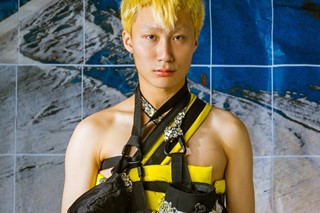 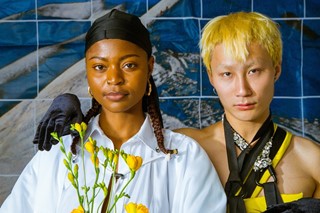 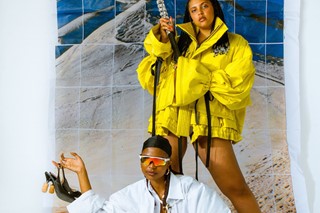 Gone are the days of sustainability being synonymous with boring design. More and more young designers are now working towards creating an environmentally conscious and ethical fashion industry, and Central Saint Martins graduate Patrick McDowell is without a doubt one of them.

The 22-year-old Liverpool native – who presented his final collection at the CSM BA show in May – first got his hands on a sewing machine when he was just 13. “I really wanted a new school bag, and my mum wouldn’t buy me one, so I made it myself out of a pair of jeans,” he recalls. “I got to the point where I was making a bag every weekend until I started selling them, when the idea of taking your own bag for life to the supermarket was still very new.”

While he was interested in design from a young age, he found his first year at Saint Martins difficult – “I had just turned 19, just left home, I wasn’t really ready,” he shares. Then, during his placement year at Burberry, he found his footing. The label became one of his many sponsors for this graduate collection – along with the BFC, Swarovski, and Oakley – and the generous donation of discarded fabrics they gave to him reinforced the importance of sustainability, which is now crucial to his approach to design. “Sustainability should just be something that we all support, regardless of what industry we’re in,” he says.

When it came to creating his final collection, the young designer took inspiration from a dress his mum wore to celebrate the millennium, mashed-up with a trip his dad took to Mont Blanc when he was six. Entitled Climbing Family, the eco-friendly collection featured oversized satin jackets with utilitarian pockets and industrial belts, checked gingham trousers and lots of Swarovski-embellished accessories – ice pick included. The collection was undoubtedly a hit, already being snatched up by the likes of M.I.A. and Rita Ora, and now the designer is looking for a way to continue challenging what sustainability can be and bring change to the industry as a whole.

Here, we talk to McDowell about sustainability, his time at Central Saint Martins and the inspiration behind his graduate collection.

What’s your earliest memory of fashion?

Patrick McDowell: My mum wearing a red dress when I was five – that’s my first memory of how transformative fashion can be. That’s something I’ve always found really amazing, how clothes can make you do things that you feel you couldn’t do before, and how amazing people feel when they wear certain things. My mum said there was also a time when I was three, when she took me into a changing room in a shop, and apparently, I looked at her and said: “Mummy that doesn’t look good together”.

How did your approach to design change throughout your time at Central Saint Martins?

Patrick McDowell: In first year, I had no idea what I was doing, I was just a mess. In second year, I kind of started to get what it was all about, so I started trying lots of different styles on myself. Whatever the project was, I was the project: I went from wearing Tudor shoes with cropped trousers and silk blouses, to wearing kimonos with metallic trousers and huge heels and loads of make-up. Then at the end of the year, I was just wearing black.

I spent my whole third year – my placement year – at Burberry, where I learnt a lot. When I came back to CSM, I enjoyed joining creativity with what I’d learnt at Burberry. Because we did so much work there, going back to university and having a whole year to do six looks seemed like the easiest thing.

What was your graduate collection inspired by?

Patrick McDowell: So it’s titled Climbing Family, it’s a mixture between my dad’s climbing trip to Mont Blanc when I was six, and the idea of me and my mum at that time climbing the mountain with him (we didn’t actually go). My dad is very manly, all his friends are also manly and straight. The starting point was taking all that, and making it me. It was about feminising that hypermasculinity and balancing it out. The origins of almost everything is in climbing clothes, but it’s all either exaggerated or reduced. For example, I used satin to make climbing trousers: that makes them look completely different to what they’re meant to be.

It was also inspired by that dress my mum wore when I was five. It was the millennium, they had this party in the house called Millennium Sparkle Party. We lived in a really normal, small, semi-detached house in Liverpool, and she was walking around the house in this floor-length crepe red dress with a train, faux fur stole, elbow length velvet gloves and Swarovski bag and shoes. The idea of walking around your own house in that is so amazing, like a ‘fuck it’ attitude.

How did the sponsorships come about?

Patrick McDowell:  When I was at Burberry, I noticed that they wasted lots of fabric and used on average only 30 per cent of what they order before a certain season. Not having any money, I couldn’t afford what I needed, so I just wrote a letter to Christopher Bailey to see whether I could use their discarded fabric – they then made a book of samples of different fabrics they had in Italy and let me pick what I wanted.

I applied for the BFC sponsorship myself, because in the second year I had three jobs. I’d work at the CSM library every weekday, then at a bar and at a shop on weekends – I had no day off. When I started at Burberry, that was paid, it was the first time that I was able to go out on a Saturday. Because of my mum wearing Swarovski, I also got in touch with them. They gave me unsellable crystals, which were defected or returned by other people.

Sustainability is a crucial aspect of your collection. Why do you think it’s so important right now?

Patrick McDowell: It just makes sense to me. I don’t think we can keep wasting and making so much, it’s just not going to last forever. Initially, I wanted to use discarded fabrics because I couldn’t afford new ones, but after a series of lectures on sustainability organised by tutor Sarah Greisty, I realised how important it is.

Just because you use fabric that someone else has thrown away, it doesn’t mean you can do shit designs obviously, but you definitely have to consider where it comes from, ethically and environmentally. There’s a common thought that you hear the word sustainability and you think of something boring, but it doesn’t have to be like that at all. It also lends itself quite well to luxury fashion, as sustainable clothes are usually smaller runs, produced in less quantity, which makes them more exclusive. So I don’t see why even the bigger fashion houses shouldn’t make sustainable fashion.

How do you think people’s attitudes should change towards a more sustainable fashion industry?

Patrick McDowell: It’s not okay to make people work until midnight every day. It’s not okay to not pay people, or to be mean to people – sustainability is also about social sustainability, and about treating people properly. For me, that’s more important. This old-fashioned idea of the King of the castle in the office, that is the bitch and has someone to refill the drawer of chewing gums, that’s so old-fashioned. The best work comes from collaboration and ideas from everyone. If people are happy working for you, they’re going to do better work.

What was the inspiration behind the lookbook shot by Jelly Luise and why did you want to work with her?

Patrick McDowell: We used to live together, so it just made sense that she shot my collection. It was really nice to work with Jelly, because when I do a shoot I only see the clothes, whereas she sees the whole photograph, so it was her idea for the backdrop (one of the pictures my dad took on the trip) and for the cardboard mountain. I was happy for her to take the lead on it, because I’d looked at those things for a year, so it was really interesting to have new eyes on them. And some of the pictures are hilarious, which is nice because I can be a bit boring with my photos – the shoots I did myself, like the lookbook, are all white-background clean.

What are you working on at the moment and what are your plans for the future?

Patrick McDowell: Now, it’s about getting someone to place a wholesale order, so I can continue working freely, and hopefully show something new at fashion week in February, but we’ll see. I’m interested in approaching fashion slightly differently than other people, perhaps. I’m fully prepared to work really hard but I’m a bit against this fashion thing of people just working too much and too quickly.