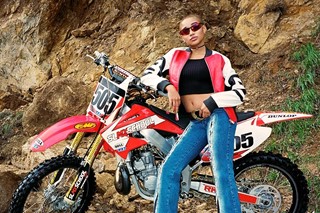 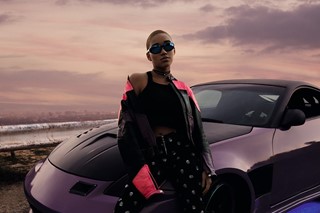 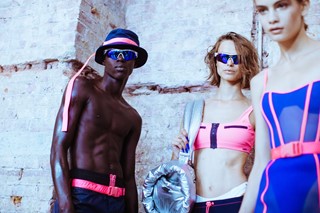 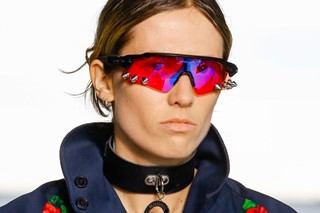 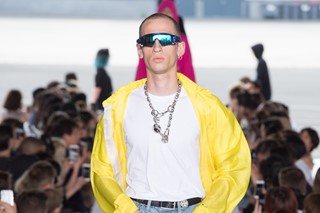 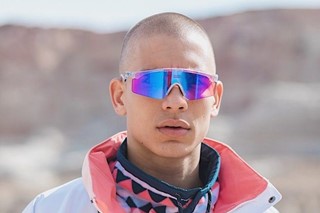 Oakley’s metallic-lensed, wraparound sunglasses were a pretty big deal back in the 90s and early 2000s, kind of like jelly shoes and Justin Timberlake’s questionable bandanas. According to a 1997 LA Times feature, everyone from Madonna to David Duchovny was wearing them. The sporty frames and bright, reflective lenses that hit the scene in ‘84 – proudly wearing the influence of the brand’s earlier ski goggles – were first adopted by cyclists and motocross riders, before they cleared the gap into the mainstream. To massively generalise, in this decade, they’ve inexplicably found favour among male office workers power walking through Central London in suits and Asics trainers, as well as on American cops, and of course, cyclists. But in 2018, Oakley-style shades are popping up in some more fashionable places than you might expect.

So why the sudden swing from tiny slimline shades to these massive not-quite-ski-goggles-but-almost? Here are our best guesses.

THEY’VE BEEN CROPPING UP ON THE CATWALK

In September 2017, Rihanna brought some Oakley-esque sports shades to NY at her Fenty PUMA SS18 show. In fact, her whole capsule collection drew from the motocross aesthetic, and Rihanna herself appeared wearing the glasses on the back of a dirt bike. Following shortly behind a few weeks later, Nicolas Ghesquière dipped a fashionably-clad toe into sports sunglasses too, with large, reflective lenses making an appearance at his Louis Vuitton SS18 show in Paris, amid a collection that was obviously not otherwise sportswear-inclined. And in the same week, Stella McCartney included her self-styled ‘Turbowrap’ frames – made characteristically eco-friendly through the use of bio-plastic – in her ready-to-wear show, which were similarly reminiscent of Oakley’s sporty designs. Margiela, meanwhile, rendered a sleeker version of the Oakley style at its SS18 show (alongside not-so-sporty neck-pillows)., while in February, LVMH Prize winning designer Marine Serre sent out models in lookalike shades, adding to her self-described ‘futurewear’ aesthetic.

As for this year, a co-branded pair of Oakley sunglasses hit the catwalk at Alexander Wang’s SS19 show in New York, where they were paired (appropriately) with pop culture references to the 90s, such as bandanas – maybe JT was onto something – and sporty tube socks. And, back to Paris once again, an Oakley-like frame dubbed the ‘Tailwind’ made an appearance at Heron Preston’s SS19 menswear presentation last month, with lenses (reflective, ofc) in the designer’s signature tangerine.

OAKLEY HAS BEEN DOING SOME SERIOUS COLLABS

In March, Ronnie Fieg’s New York-based retailer Kith announced a massive 5-brand collaboration with adidas, Columbia, G-Shock, Tumi, and – you guessed it – Oakley. The sunglasses’ typically-bold hues are prominent amongst the capsule’s otherwise muted colours, drawn from the reds of Utah dirt. Perhaps they’re supposed to represent a shimmering mirage. In any case, they stand out. Elsewhere, a SS18 collaboration with Palace takes Oakleys back to their roots with 90s-inspired colourways and a campaign featuring distinctive motocross visuals. Even A-COLD-WALL*’s Samuel Ross is pitching in, working with them to produce a minimal AW18 collection debuted at Copenhagen’s CIFF fair, with another collaboration for SS19 in the works.

SOME REALLY FAMOUS PEOPLE HAVE WORN THEM

We’ve already hat-tipped Rihanna for her early adoption, but before that, in the spring 2017 issue of Dazed, actor Amandla Stenberg wore similar-style sunglasses in a photoshoot styled by creative director Robbie Spencer, featuring dirtbikes and leathers. More recently, Kim Kardashian helped spawn the tiny sunglasses trend after revealing on Keeping Up With the Kardashians that Kanye had advised Matrix-sized frames were the way forward. Now she’s being credited (or blamed, depending on your outlook) for the sporty shades’ popularity as well. Spotted wearing Oakley-style frames during the Yeezy Season 7 paparazzi campaign and in the crowd at Virgil Abloh’s much-examined Louis Vuitton SS19 presentation, she’s sparked many a hot take and style guide.

THEY TIE INTO OUR IRONIC FASHION OBSESSION

Just look at the jewel-encrusted ‘dad’ sneakers from Gucci’s recent AW18 campaign, Y/Project’s knee high Uggs, or Christopher Kane and Balenciaga’s separate Crocs collaborations; everywhere we look we’re surrounded by things that are so wrong they’re (just about) right. So why not glasses, too? Oakley sunglasses fit into this category perfectly; they’re designed for technical performance – the brand holds more than 850 patents to prove it – not to be sleek or sexy, though the oil-spill-across-your-face look is, admittedly, pretty interesting. Whether that’s the recipe to establish a long-term place in the fashion world is another matter.

“Everywhere we look we’re surrounded by things that are so wrong they’re (just about) right. So why not glasses, too?”

DEMNA HAS DONE A VERSION

Accessorising the newest Vetements collection at the brand’s SS19 runway show during Paris Couture Week this month can’t have hurt Oakley’s reputation. In this case, the glasses usual iridescent lenses were studded with menacing metal spikes. These gave the glasses an aggressive, cyberpunk feel that was a departure from Oakley’s usual techy functionality and envisioned them for a new consumer (because let’s be honest, you’d have your eye out if you were wearing them when you came off your dirtbike). The collab speaks volumes about Gvasalia’s Midas-like touch: his effortless transformation of the mundane into the cutting-edge. So, race you to the accessory department of an Evans Cycles...