And debuts a collab with Converse 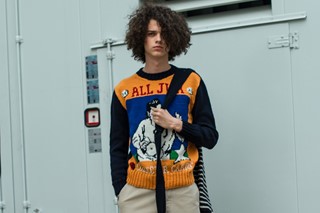 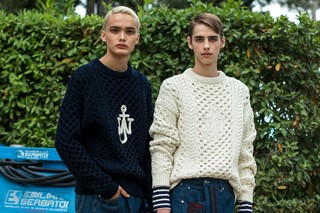 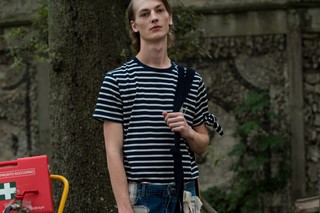 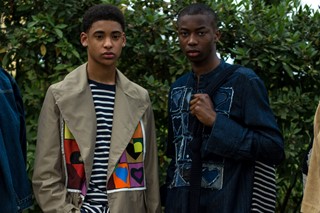 This season, J.W.Anderson swapped his usual London show spot for one at Florence’s Pitti Uomo. Here’s everything you need to know about his SS18 show last night.

GUESTS SAT ON PILLOWS ON THE GRASS

The show was held in the gardens of Villa La Pietra. Rather than the narrow benches his shows are known for, guests arrived to find pillows on the grass instead of seats waiting for them. Each of them embroidered with a new and improved J.W. logo designed by design agency M/M Paris for the occasion. There was also a booklet on each of the seats filled with images by artists and photographers such as Anne Low, Wilhelm Von Gloeden, Wilhem von Pluschow and Vincenzo Galdi – providing more context for the inspiration behind the collection.

THERE WAS A FOCUS ON RELAXED CLOTHING

Extending beyond the pillows, the relaxed vibe worked its way into the collection too. As is often the case when getting a chance to escape the city, Anderson was able to clear his head and focus on taking things to a new level. Backstage after the show, he explained that the idea was “a fetishisation of basics,” explaining the collection that ticked the box of almost every classic imaginable: Breton tees, Aran knits, trench coats and leather jackets all present. It wouldn’t be hard to imagine the designer in the clothes himself – often favouring plain tees and jeans over his more extravagant ensembles.

While fans eagerly await the already announced Uniqlo collaboration with the Irish designer – set to drop later this year – he surprised us all with an unexpected partnership with Converse. The shoes from the collection take the classic high-top silhouette reimagined in a rainbow of glittering colours. For the less adventurous among you, they also come in black covered in the brand’s logo. “From my very first pair, Converse have represented such a radical movement in style and culture,” said Anderson – who is almost always spotted in a pair. Watch this space to find out when the glittery collection drops.

Those with sharp eyesight will have spotted Jonathan Anderson not once, but twice during the show. Aside from taking his bow at the end, he appeared on a t-shirt that read: “MILITARY MEN WEAR J.W.ANDERSON” dressed up in wartime garms. Imagine him as your modern day, Irish Uncle Sam. Here, the logo appeared in a Coca-Cola-esque font (a throwback to Anderson’s collab with fashion’s fave soft drink, perhaps?) Instead of enlisting you to fight in a war, he just wants you to join his gang.