Two years after Ridley Scott collaborator Janty Yates turned up unexpectedly at his studio, Green’s designs have finally had their big-screen debut 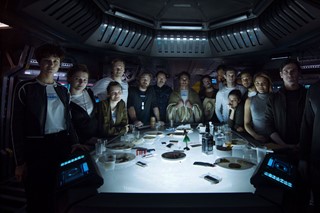 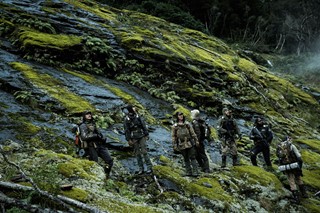 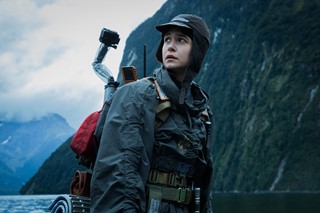 There are memorable scenes in films, and then there’s the scene in which the so-called ‘Chestburster’ explodes from John Hurt’s sternum in Alien. In that one moment of gruesome, primal terror, Ridley Scott’s low-budget B-movie was elevated to icon status, spawning three sequels and a trilogy of prequels, the latest of which, Alien: Covenant, was released last week.

“It was terrifying, wasn’t it? I remember watching it at a friend’s house when I was in primary school. When we were working on that collection, we were actually joking that the jumpers with the holes in them looked like something the Alien would burst through. Maybe it was some sort of weird sign, I don’t know,” says designer Craig Green. The AW15 collection he’s recalling was characteristically utilitarian, featuring workwear-inspired jackets, distorted t-shirts and, yes, a few sweaters that could have quite easily allowed for an infant Xenomorph to emerge through them (thankfully, however, the models made it up and down the catwalk with insides firmly intact that season).

That subconscious reference might just have been what struck a chord with award-winning costume designer Janty Yates. Having come across Green’s collection on display in the menswear department of Selfridges, Yates approached him to see if he’d be interested in an upcoming project she was working on with Ridley Scott. The project turned out to be Alien: Covenant, and Green, a “massive fan” of the original film agreed.

Here, we catch up with the British designer as he fills us in on how the partnership with Yates came about, the inspiration he finds in cinema and how it feels to be going down in film history having worked on one of the biggest – and most loved – movie franchises ever.

YATES HAD HER WORK CUT OUT GETTING IN TOUCH WITH HIM

“About two years ago I was at the studio and I got a call from the receptionist to tell me there was a woman – Janty Yates – downstairs asking to speak to me. So I went down and her dog was barking in the back of her car and it was all very surreal. She said to me ‘I’m a real person, I promise, I’m not a weirdo – I’ve been trying to get in touch with you as I’m working on a film with Ridley Scott and I really want you to work on it too.’ I looked her up afterwards and saw she’d won awards for Gladiator and Prometheus and was like okay, yeah, that’s her! Apparently, she’d been calling and emailing and she’d not been able to get in touch with me, so she’d got into her car and just came to the studio. It’s amazing that she went to such an effort to contact me so we could work on the project together – I had to say yes.”

“I remember watching Alien at a friend’s house when I was in primary school. When we were working on (the AW15) collection, we were actually joking that the jumpers with the holes in them looked like something the Alien would burst through” – Craig Green

IT WASN’T A CONVENTIONAL PARTNERSHIP BETWEEN COSTUME AND FASHION DESIGNER

“Initially, Janty bought a few pieces from Selfridges before coming to me to borrow the entire AW15 collection, which she flew out to LA to show Sir Ridley – I got a call a few days later to tell me he loved them. She showed me some of the references they’d put together and they were going for this medieval, futuristic kind of thing – she showed me images of this straw body armour that looked very much like what we were doing that season. We had the quilted armour-style vests with all the straps that could be loosened and tightened and tops that almost look like the inside of space suits that have strings that you can tighten and warp the shape of in very different ways. It was also the collection we did the skin-tight, hand-sewn twisted jersey tops in, which she thought would be perfect for the costumes the cast wear in the sleeping pods. With most of the pieces, it was a case of adapting them for the film, so instead of tops they become one-pieces and in place of random twists are gathered ‘lifelines’. It was kind of a weird, coincidentally shared vision that seems to have worked out quite well.”

THERE ARE BIG DIFFERENCES BETWEEN CATWALK AND COSTUME

“It was quite an unusual process because I didn’t come up with ideas and designs specifically for the film – Janty liked what I’d already done – but there were things to consider when we were adapting the pieces for the screen; one of the pieces was in a shade of green that doesn’t show up on camera, so we had to make it in a specially-dyed custom colour for example. We also faced quite a challenge in terms of sizing – we had to make skin-tight bodysuits for all the actors in the film, from Katherine Waterston who’s five-foot-something and very slim, to a guy who’s almost seven foot and built like a rugby player, and everything in-between. We also didn’t realise how many costumes we’d need to make. For every actor and every costume, we had to make 10-12 pieces of each style – we ended up making 160 of those hand-sewn one-pieces that we fit by hand in the studio, so it was pretty labour intensive. In the end, we made a few hundred pieces; you know, the original one, the three that are going to be covered in blood when this or that happens, the backup – we had a bit of a production line going on at one point in the studio.”

AN ALIEN DID NOT BURST OUT OF ONE OF HIS COSTUMES, BUT HE’S OKAY WITH IT

“It was really exciting to see that the costumes are worn by the cast right the way through the film, we didn’t know until we saw it just how much they’d feature. There was talk of one of the pieces being worn when an alien explodes out of someone at one point — Janty was like ‘yeah, amazing, that jacket unties at the front so we can get the alien to pop out of it’, and I was like ‘if you make that happen I’m going to die’, but they kept killing off the people that weren’t wearing our pieces! I’m okay with it though. Michael Fassbender and Katherine Waterston wear our costumes throughout and (spoiler!) Katherine fights the mother Alien in our jersey bodysuit, which is pretty amazing!”

HE’S NOT GIVING ANYTHING AWAY AS TO FUTURE COLLABORATIONS

“I’m a horror fan, I watch horror films all the time, and I definitely lean towards the horror side of sci-fi which is why Alien: Covenant was so exciting to work on. Cinema is something I always reference in my work and all of my early collections were inspired by films, the original Wicker Man for example, and The Village of the Damned, which my MA was based on. When we’re planning the LFWM show each season, we always think of the finale song as the credits rolling, we want it to be immersive and film-like. I had a great time working on Alien, and I think Janty did too — I hope she did. Will we work together again? Who knows, we’ll see.”

Watch the trailer below: