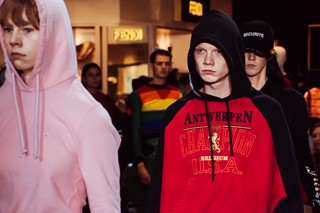 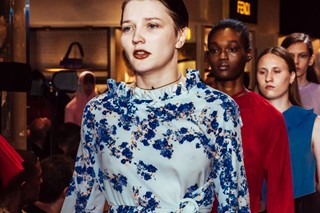 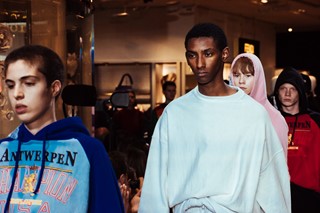 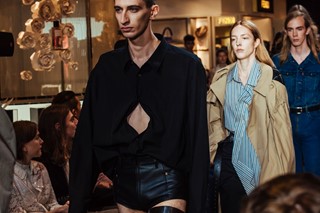 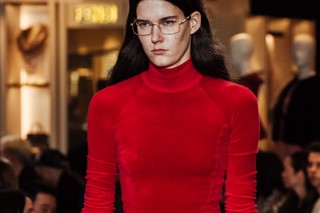 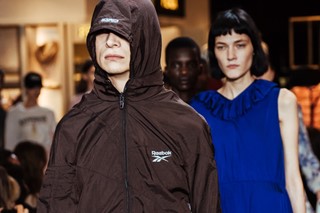 When game-changing collective Vetements announced a guest spot at the notoriously conversative Couture Fashion Week, eyebrows were raised. The deconstructed denims and oversized hoodies favoured by Demna Gvasalia’s design troupe are a far cry from the elaborate creations usually shown under the couture umbrella – was this a sign of an industry in mutation?

Today’s show was not couture in the traditional sense. Instead, it was a mammoth collaboration with no less than 18 brands, each of which saw their signature pieces deconstructed. Manolo Blahnik had his designs washed, burned and boiled; Juicy Couture’s famous velour tracksuits were reworked into eveningwear and Alpha Industries’ MA-1 bomber jackets had their proportions supersized. The result was, in Gvasalia’s own words, “a modern idea of couture” – one focused on products as opposed to simply prestige.

THE COLLECTION WAS A LARGE-SCALE COLLABORATION

Vetements is famed for deconstruction. This season, Gvasalia took things a step further by deconstructing the work of others, resulting in a collaborative collection which distorted the iconic DNA of brands such as Levi’s and Dr Martens. The designer explained his intentions in an interview with Cathy Horyn – “The idea was always to take the iconic, the most recognisable product from their brand, and put it into a Vetements frame, whether in terms of shape or construction.”

THE ACTION UNRAVELLED IN A DEPARTMENT STORE

Vetements’ unconventional show venues have become almost as famous as the clothing itself. Past collections have been shown in gaudy chinese restaurants and underground sex clubs, but the action this season unfolded in the more conventional confines of high-end Parisian department store Galeries Lafayette.

There was something ironic about the police presence outside the show, especially considering that one of Vetements’ first viral hits was a controversial raincoat branded with ‘Polizei’. The brand’s ability to inspire hysteria was, however, proven by the need for police officers otuside to control the crowds of fashion fans gathered to watch Vetements’ couture debut unfold.

THE INVITE WAS A SHOPPING GUIDE

In lieu of a traditional show invite, guests were given a Galeries Lafayette shopping guide branded with its signature slogan “the ultimate shopping destination”. Inside the custom map were the names of each of the 18 labels deconstructed by Gvasalia, whereas the show itself took place on the first floor – even the sections were labelled with the names of high-end designers ranging from Fendi to Marc Jacobs.

Office classics were warped and distorted – the show opened with a series of formal suits complete with loose, oversized shirts and exaggerated shoulder pads. Vetements muse Paul Hameline walked the runway in a double-breasted jacket not dissimilar to those created by Gvasalia at Balenciaga, but worn open and with a belt trailing along the floor.

Gvasalia delivered on his promise to filter house classics through the Vetements lens. Levi’s classic jeans became denim jumpsuits, Schott’s classic leather made its way onto trousers and moto jackets and Carhartt’s distinctive overalls were blown up beyond recognition. Even the eveningwear was unconventional – a series of sheer gowns were teamed with waist-high boots, displaying a delicate side rarely seen on the Vetements runway.

Vetements is a brand famous for its footwear. From sock stilettos to flame-leather boots, the label’s footwear often subverts expectations and twists elements of classic styles. This season saw Chelsea boots and kitten heels reworked, but the most noteworthy piece was a pair of waist-high boots which came in colourways from black to scarlet.

JUICY JUMPSUITS MADE THEIR RUNWAY DEBUT

The bedazzled ‘Juicy’ that recurred on today’s runway is most frequently associated with the likes of Paris Hilton, who first championed Juicy Couture’s velour tracksuits almost a decade ago. To see them on the couture runway was unlikely to say the least, but now Gvasalia has reworked the casual classic the brand is sure to experience a surge in popularity – the red high-neck jumpsuit with sewn-in gloves was one of the collection’s standout pieces.

JUSTIN BIEBER WAS IN THE HOUSE

Justin Bieber is in the house too #vetements#PCW#GaleriesLafayette

The mutual love between Bieber and Vetements is well-documented. The Parisian label previously created an oversized hoodie emblazoned with the slogan ‘justin4ever’ which quickly became a cult buy in its own right, whereas Bieber’s tour merchandise bears uncanny resemblance to the brand’s famous Titanic hoodie. It therefore came as no surprise to see the star sat front row to catch the latest from his favourite design collective.