After his gentrification-inspired graduate collection was picked up by Opening Ceremony, Daniel W. Fletcher is continuing to blend politics and fashion 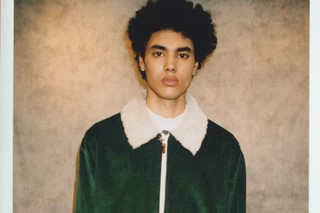 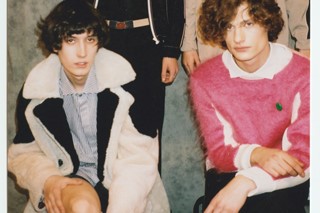 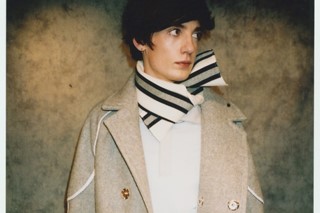 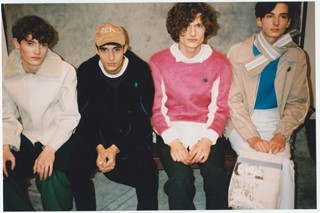 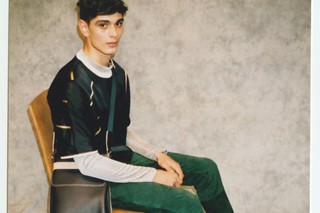 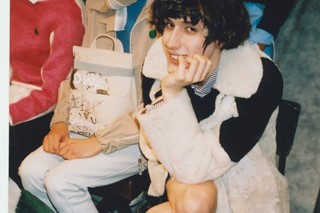 This feature is part of a series of collaborative content brought to you by 1 Granary.

Not many designers get their BA graduate collections transformed into an eight-piece capsule by rebellious retail hotspot Opening Ceremony, but that’s just what happened to CSM alumnus Daniel W. Fletcher after he left school last year. Currently living between London and Paris, where he’s juggling his own label with a job at Louis Vuitton, the Cheshire-born designer’s collections are infused with political and social commentary. For him, fashion is an arena to trojan horse topics like Tory austerity and the destruction of the NHS into people’s consciousnesses, helping to start conversations.

‘Peckham Pony Club’ was the name given to his gentrification-critiquing graduate collection (on the advice of fellow CSM alumnus Tigran Avetisyan, who told him that every collection should be described in just three words). For AW16, debuted at a presentation over New York Fashion Week, those words were ‘English School Boys’. “I’ve had a lot of learning and growing up to do since graduating in the summer and starting my label, so this really got me thinking about youth,” Fletcher says, now in the midst of making his own massive, albeit daunting, strides from the insular world of university into the industry.

At his AW16 presentation, the models – about a dozen, all boyish looking – were arranged as if about to take an end of year class photo, transporting the audience back to school. The front row sat with their hands neatly-but-awkwardly placed on their knees; the back in the gaps between them with their hands behind their backs. Dressed in green corduroy jackets with shearling collars, mohair jumpers and untucked shirts, they captured perfectly that nostalgic moment we all remember. There were big cases inspired by lunchboxes, and brooches which “came from the idea of picking up a souvenir on a school trip.”

Developing on last season’s social message, Fletcher sought to spark further debate this season with a focus on Tory austerity, the London housing crisis and the precarious future of the National Health Service. Interested in the work of Ruth Glass, who coined the term gentrification, Fletcher describes that, “for her, the purpose of sociological research was to bring about social change” – and it’s the same for him. “If being political in my work can make others aware of an issue and start to address it, then it’s something I will continue to do.”

This season, the word ‘RENT’ was emblazoned onto black and camel caps, while ‘Save Our NHS’ came stitched onto the medical blue scrub-style trousers. “The housing situation in this country is out of control. In London the rents are rising so quickly that a lot of people can’t afford to live here,” Daniel continues. The collection is retrospective not only of youth, but of the differences between growing up now and growing up back then. “I want to conjure up feelings of nostalgia and remembrance of childhood and youth, and make people think about what it is like to grow up now, compared to 10 or 20 years ago, with the realities facing recent graduates like myself, such as mountainous debts and sky-high rent.”

“I want to conjure up feelings of nostalgia and make people think about what it is like to grow up now, compared to 10 or 20 years ago, with the realities of mountainous debts and sky-high rent”

That Fletcher has enough on his plate is an understatement. His aforementioned position at Louis Vuitton has lead to being taken under the wing of Kim Jones, the artistic director of men’s collections. Also previously a mentee of Lucas Ossendrijver, creative director of Lanvin’s menswear, Fletcher has invaluable access to two of the most influential people within the industry. “One of the things I learned most from both Lucas and Kim was how to put a collection together. They are both extremely good at creating a solid, cohesive story in their shows.” The benefits of this are seen in the symbiotic relationship between the AW16 story of schoolboy nostalgia and the uniformity of the sport-luxe inspired clothes themselves.

As part of the first batch to graduate from the CSM King’s Cross campus at Granary Square, the collection is a cathartic moment for Daniel. It’s a meticulously crafted example of fashion imitating life – not only in the political commentary of the Conservative government’s policies, but also with regards to Daniel’s own evolution from student to professional. Enjoying his deserved successes, this season is an educational swansong. The adolescent charm of the collection became tangible for a brief moment at the presentation, when two people entered the room. “I’ve got to go, mum and dad have just arrived,” Fletcher said, before bounding off to greet them. And who better to witness his farewell to adolescence than his parents?