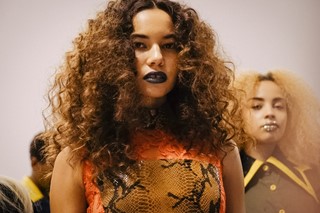 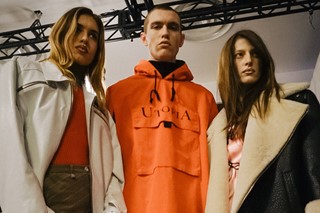 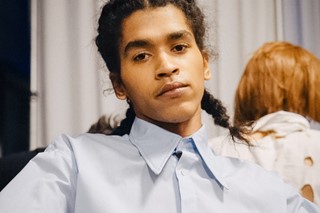 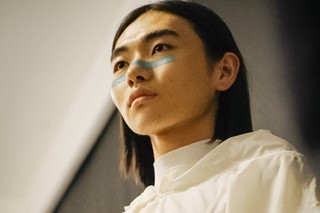 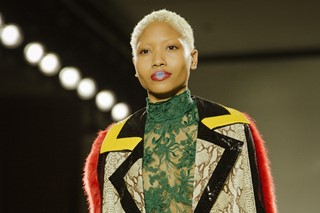 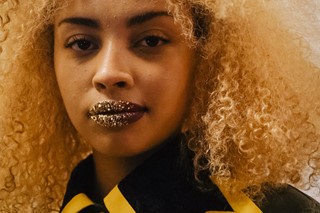 This year’s VFiles Runway show was all about the future of fashion – literally. Wearable tech designer labels Neuro Couture and VFiles’ new interactive Studio_XO collab stole the spotlight, while experimental European brands Hardeman, Anton Belinskiy and Kim Shui brought editorial vibes to the runway. “We chose each other in a kind of way,” winning designer Sophia Hardeman told Dazed in relation to her experience working with VFiles, “promoting ourselves and each other, opposing big company finances and sponsors. It is actually the people we speak out to, like ourselves, our public art friends that have the voice of speaking and that’s fucking cool. I am really proud to be part of that.’ As always, AW16 mentors (Virgil Abloh, Italo Zucchelli and others) came through with the most lit selection of global fashion innovators to present their collections this season.

The show opened with a group of booty-popping, VFiles_XO wearing dancers performing a wild routine while Beyoncé’s prodigy Sophie Beem performed live for the first time ever. The workwear inspired collaboration featured oversized hooded ponchos, padded vests and tee-dresses that flashed the “VFILES_XO” graphic in neon colours. Shortly after the performance, Swiss design duo Ottolinger presented their heavily distressed AW assortment. Classic shapes were cut from pre-burnt, hole-ridden fabric. “This season we were burning the garments,” the duo told Dazed, “so it was just the two of us lighting some pieces on fire together. And watching, we were like “Oh, where does this flame go?” It’s really intuitive, the process and how we treat these garments. Like sand-papering as well, all really rough techniques.”

2015 LVMH Prize Semifinalist Anton Belinskiy followed, with a collection that possessed the same irreverence and cool-factor as 90s Raf and Margiela. The garments were swathed with the word UTOPIA — the collection being an IRL utopia of oversized silhouettes, pastel colours, and soft textures. Giant moto jackets were lined with baby pink shearling fur and feminine, satin gowns were layered with masculine blazer coats. When asked what his inspirations were for the collection, Anton replied: “The utopia, the kind of unexisting scene, something that you can imagine yourself in. The world of fashion.”

Next was Italian/American designer Kim Shui, presenting a punk-goes-couture collection for AW. Models wore fuzzy, Cher Horowitz-esque sandals and a confection of patent leather, plaid and fur garments. Jackets and skirts were cut from delightfully mismatched fabrics like lace and snakeskin. Kylie Jenner sat front row wearing a navy, lacy body-stocking designed by Kim herself. “A lot of the techniques involved combining like faux-fur, with like leather, with like wool, where these techniques like sewing them together may not be that common,” Kim told Dazed. “My past work was constantly exploring texture and colour. This time, it was more about applying it to a more wearable way to garments we can identify with and that we would have in our wardrobe.”

Closing the show was Central Saint Martins graduate Sophia Hardeman’s reworked denim collection. A model in distressed booty shorts opened the show carrying two excited puppies down the runway. Sophia’s irregular garments featured traditional jeans with cartoonishly high cuffs, pelvic cut-outs and gigantic pockets paired with thigh-high Converses. The model selection was the most eclectic and creative of the bunch, with androgynous girls and guys dancing down the runway to 80s classics like Blur’s “Girls & Boys” in their genderless garments. “My collection is called Out Of The Blue, and it is about challenging conventionality and pulling the normal aspects out of proportion and abstracting things and enhancing discomfort,” Sophia told Dazed. “I have underwear integrated, like when your underwear sticks out of your jeans and gets integrated into the piece. I have a silk see-through denim suit that is like nude, it’s like a second skin – it’s like a reference because you’re always wearing nothing, you're like naked.”

In true VFiles style, the show closed with a fun, slightly random, live performance from Tyga who performed a medley of his #1s “Rack City”, “Faded”, “Loyal” and “Ice Cream Man”.