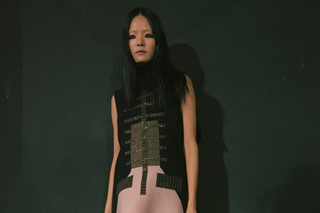 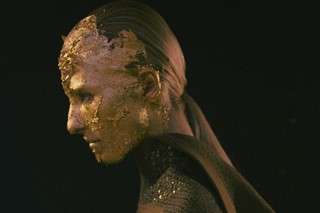 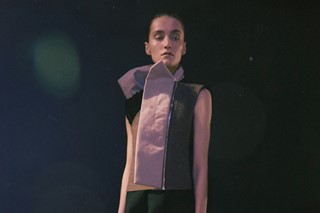 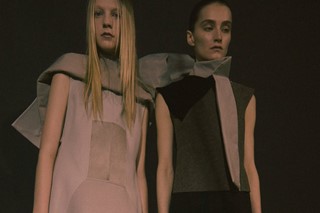 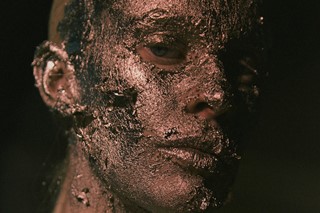 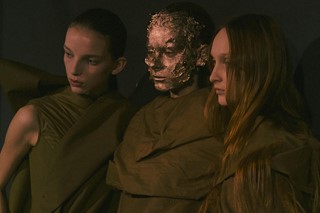 Golden faced Mayan sun goddesses crash to earth and land in the concrete basement below the Palais de Tokyo.

“I’ve been looking at Frank Lloyd Wright’s Hollyhock house and obsessing over it. I mean, what would you wear in the Hollyhock house? What clothes could possibly live up to that?” explained Rick Owens after the show. The Mayan-influenced building, which just recently re-opened to the public after a $4.4M restoration, ignited his love of old Hollywood excess. “I’ve been so linear for so long, so I thought let’s just fall apart and collapse. And as long as I was doing that I thought let’s indulge in sequins; I’ve always wanted to do sequins. I just knew it would take some time to figure out how to fit it in to my universe and so I had a minute this time and I’m glad I did – I just love them.”

The body as a temple:

In the aftermath of his glorious, full-frontal offering for AW15 menswear, today’s show invite (a leather slab covered in long synthetic hair) suggested that this could be round two. But Owens is a designer who doesn’t succumb to shock tactics. His men’s show felt more like a primitive gesture than an empty attempt for headlines – and let’s face it; he’s not in need of it. Today, the female form was certainly playing on his mind. There were leather breast plates, which felt more like body armour than anything over-sexualised, and, like his men’s show, languid tunics that hung like flesh around the body. Pieces of synthetic hair edged their way around garments, whilst shoulders were accentuated by structured capes.