Junk culture connoisseur Jeremy Scott has just returned to LA after a seizure-inducing show at Milan fashion week. Renowned for pushing fashion towards the unexpected, his debut collection as creative director for Moschino saw him obliterate the institutional six-month cycle of fashion within minutes – his junk-food-referencing collection was available to consume online as soon as the show was over. “There’s this term in the industry, of course, ‘fast fashion’ – but I wanted to do a new concept that made it faster, like McDonald’s,” he explains, sitting poolside in Beverly Hills. “Literally, here you go, it’s served! I don’t have a crystal ball, but I feel like it could be where fashion has to head.”

It was a fearless move for Scott, who has been blending high fashion and pop culture seamlessly for the last 17 years. His namesake label – which remains proudly independent – is celebrated for its cultural dialogue with rappers, fashion kids and pop icons alike. Scott is a populist who doesn’t hold back. His first Moschino menswear collection, which he debuted in London in June,  brought equal amounts of inspired confusion and unexpected visuals, heaving with acid house smilies, re-appropriated “logo-mania” and his own counterfeit vocabulary with the brand (which he termed “fauxchino”).

The Milan show opened with one of his many muses, fashion rebel Lily McMenamy, who similarly has no qualms about wearing fashion to the fullest – she notoriously left for the after party still clad in Scott’s finale Budweiser gown. It seemed only appropriate to transform her into Ronald McDonald for this feature. “It’s Ronald McMenamy,” she says. “It’s much more chic! After the shoot, I got a message from a friend saying ‘Were you just walking down Kingsland Road dressed as Spongebob Squarepants carrying a watermelon? What’s happening to you?’”

At his core, Scott is an American dreamer. As he prepares for his next Moschino womenswear collection and the release of his first monograph with Rizzoli, we asked him to give us a 26-letter guide to America, as seen through his eyes.

Naomi Osaka: ’Being unique is my strength’At just 24 she’s won four Grand Slams, lit the Olympic torch, and changed the way we talk about mental health in sport forever. Hitting back against her critics, Naomi Osaka reflects on the quest for self- worth that transcends trophies
Jeremy Scott Moschino, AW14 Issue6 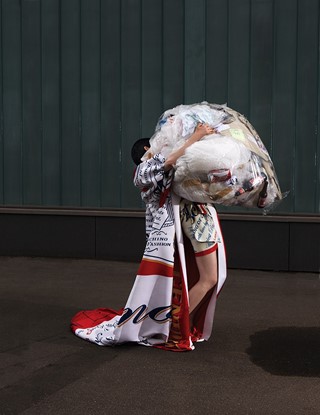 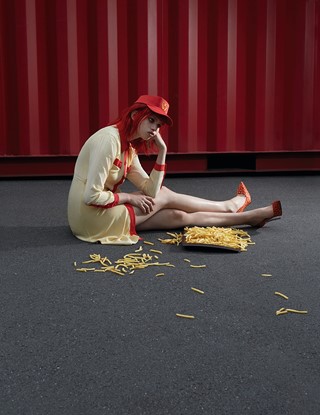 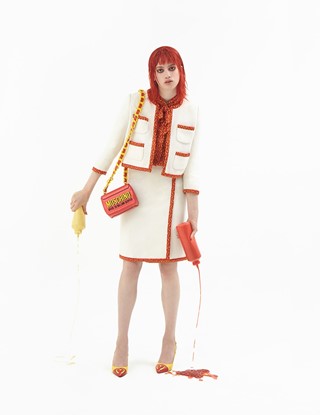 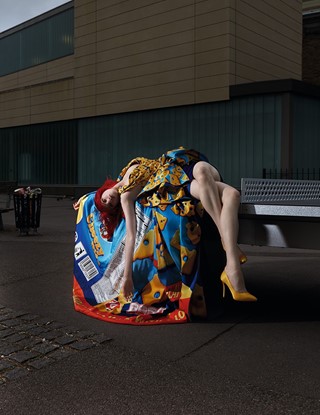 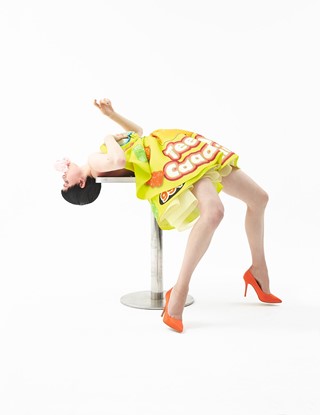 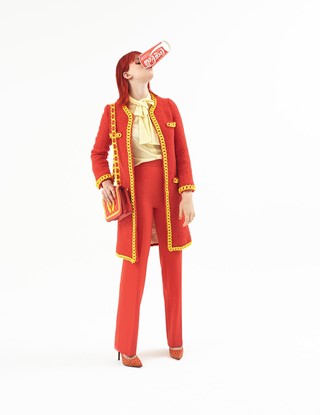 I do believe that I come from the land of Madonna, where it doesn’t matter what you were born into, you can become what you want to be. That truly is the essence of America. It’s always been part of my outlook and my philosophy.

I’ve always loved the Batman logo. And of course I love Bart Simpson. He’s the epitome of the American teenager: a little rotten, a little bad, but there’s still that heart of gold, there’s still that redemption quality. And then there’s the hybrid, when he does Batman – Bartman!

Every TV show we watched when we grew up was filmed here basically. So California’s kind of cinematic or reminiscent, because so much of it has been made into images that we’ve digested. That’s one of the reasons I love Los Angeles – it’s Hollywood, the land of make believe. You can re-imagine anything, and I love that.

She’s the only one that makes me go nuts. I haven’t met her, but I got tricked once. Katy Perry was having a birthday party, and out comes Dolly Parton. Or at least I thought it was Dolly Parton – it looked just like her. I was in a full panic! I love her humour. She also came from rural poverty and made herself into this shiny little rhinestone.

It’s how people say they’re sorry and say they love you, it’s amazing.  For me,  my work is about communication. Emoticons are a new way to communicate. It’s fascinating for me how I can use that in my work to propel it further.

All my elementary school years were spent living on a farm. I do feel that it helped my imagination growing up. There were dilapidated cars, dilapidated tractors – everything could become other things. I remember digging in the dirt once and finding dishes from the depression that someone had buried, so I was suddenly playing restaurant!

I did a whole collection inspired by a multitude of shows – Wheel of Fortune, The Price Is Right. And from that – art-imitating-life and life-imitating-art – afterwards, they invited me on to Wheel of Fortune to dress Vanna (White) for the week with the clothes I’d designed.

“McDonald’s seemed to be very supportive. A day or two after the show they posted on their Facebook, 'Milan Fashion Week has never looked better!'” – Jeremy Scott

A Hershey’s Kiss is the most American chocolate there is. And the Hershey’s bar is so iconic – I did a dress this season inspired by the packaging. I actually did my invite inspired by it. I did Katy’s Kisses too, a bustier for Katy Perry.

I own my own company, I own my own brand. I can do whatever I want with it. I don’t have this other thing twisting my arm, telling me what I can and can’t do. I can’t function with those terms. I chose to work with Moschino because I knew they wouldn’t interfere. I love to see how I can shape my vision into different worlds.

This season for Moschino, I wanted to do something to play with their heritage of doing fancy evening gowns. I wanted to create these unusual shapes. I thought, what if I took a Barbie and took an empty bag of chips and made it into a dress on her? It’s the way the material folds. It was also just the fact that high fashion’s so anti-fat – to have things that literally have fat content on them, it just seems hilarious to me. Fashion people are so notoriously afraid to touch anything with a calorie!

As far as pop music goes, she’s like America’s sweetheart. For me, she really does embody the American dream. Before her album came out, she came up to me at this event and said ‘I’m a singer, you’re my favourite designer and one day I’d love to have you dress me.’ We took a picture together, and you know what, I ended up dressing her for her album release! I didn’t even remember this story. When I dressed her for her album, I said, ‘It’s so nice to finally meet you!’ And she said, ‘We’ve met before,’ and reminded me.

She is the Trapper Keeper (a three-ring binder popular with US children) queen. It reminds me of back to school, which is a very American thing: back-to-school sales. Getting your pencil set ready – it was such a ritual! Lisa Frank was the epitome of school.

I was driving down La Brea and saw McDonald’s and was like (gasps), ‘McDonald's, Moschino! Moschino, billions and billions served, oh my God!’ It just hit me, as simple as that. I wanted to do something inspired by their glorious colour palette – take their iconic ‘M’ logo and bend it to a heart, which is one of the symbols of Moschino. I was trying to make this blur. McDonald’s seemed to be very supportive. A day or two after the show they posted on their Facebook, ‘Milan Fashion Week has never looked better!’

With pop songs now, you basically need to have a rap component if you want that number one. That’s what I love about Nicki – she doesn’t need a guest rapper, she can do it all. Also, she’s so brilliant with her words. We were doing something for one of her tours and I was putting graffiti on clothes, and I told her, ‘I want to go over the words, because it’s so important to you, as an artist – your manipulation and usage of words.’ And she was like, ‘Thank you for realising that!’ I love her, I love her music and I love her attitude.

She’s the most American icon I can think of. When I was in high school or junior high, I watched her show regularly. I love watching her, she’s so cute. Full of joy, positive and upbeat.

I am Miss Piggy’s favourite designer. That’s true, you can look that up and there are interviews where she’s said it! I was the first designer ever to make Piggy custom clothes. She was hosting the Macy’s Day Parade and I dressed her for it, and we took a picture in the middle of the street – and it ran in Dazed, ironically enough! She is the diva.

It’s amazing how much RuPaul’s killing it (with RuPaul’s Drag Race). I love the show, it’s so funny and entertaining. It goes back to the American dream: to have a drag queen with a top-rated show that has billboards and subway ads – and that’s totally normal.

My brother and sister were ten years older than me, so when I was little, they played rock. I would hear it all day in the house. So I know all the words to Foreigner and Journey songs, and Styx – real true stadium rock. My favourite rock star is David Lee Roth – he’s the coolest.

Spongey, of course. The funny thing is, I’ve never really watched the cartoon. He’s just an image, and that’s what I think is so fascinating.

I have one that was my father’s. It’s a really old ratty handmade farm teddy bear. I was doing research on teddy bears the other day and I was reading about how teddy bears go back to (US president) Teddy Roosevelt. He was on a bear-hunting trip but refused to shoot a bear. They started making these little stuffed bears and calling them Teddy because of the gesture.

To me, Uncle Sam is the American flag. I’ve done so many things with the stars’n’stripes – such as my wing shoes with the flag wings – because they are just so iconic. They are very American, but actually when you start breaking them apart, it’s a lot of other countries’ flags – red, white, blue, the stars, the stripes.

I love Vegas. I think it’s funny. I like how they’ve created a Sphinx and an Eiffel Tower, it’s like – why not?! But it’s two/three days max there for me.

He’s from Kansas City, like me. We share a lot in common, wanting to create a magical world for people to live in. Obviously I love cartoons and Mickey, and so many of the things that he created and perpetuated.

Remember when Kris Kross would wear their pants round backwards? I loved the whole thing. It’s so funny, Björk loves them. She would always make me play them when I’d DJ for her – if I didn’t have Kris Kross, it was gonna be a bad night!

THE YOUNG AND THE RESTLESS

The longest running soap opera in American history. It was super surreal to go on and play myself on the show, but say lines that matched the show’s plot. I had this wordy, wordy dialogue, too. It really was so weird, being myself but not being myself!

Only in America would you have these guys with long beards that go down to their knees, these rock stars driving this weird car with a ZZ keychain. ZZ Top were their own thing, it’s bizarro. That was mainstream! You couldn’t get away with that today.