With their new boutique, Carven's Guillaume Henry explains why his heart belongs to the 90s 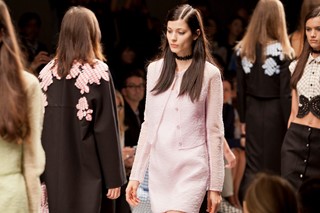 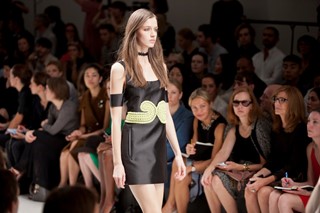 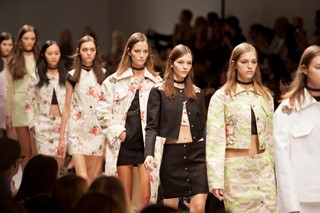 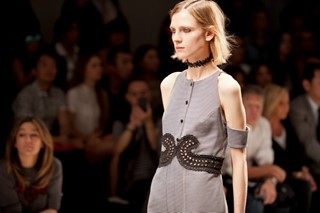 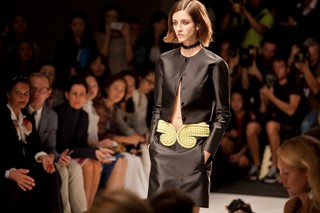 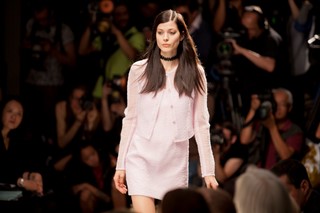 Since joining the fashion house in 2009, creative director Guillaume Henry has imbued Carven with a demure sensuality. His schoolgirl collars and coquettish cut outs are now synonymous with the Carven aesthetic, bringing a girlish sense of humour to the Paris schedule.

Yesterday marked the opening of the brand’s first London boutique, three years after the opening of their Saint-Sulpice store in Paris. Masquerading as an oversized wardrobe the store is comprised of Joe Colombo lights, a green cashmere carpet and thick oak walls conceived by designer Eric Chevallier. Despite the cashmere, it is a consciously stripped back space, less ostentatious than its South Kensington location. With a reference to Carven’s ready to wear collections the store’s design mixes “common materials with richer elements” such as wood and dark metals. Resulting in a familiar and accommodating space, the store’s focus remains on the clothing, in particular a wall devoted entirely to Henry’s signature collars.

Dazed Digital: What is the aesthetic behind your new London store?

Guillaume Henry: When we started designing shops in 2010 I wanted them to look like a familiar place, nothing too intimidating or edgy. I wanted them to be something that you like, but you don’t even realise, like a tube station, café or even a school. We try to replicate what we do with our clothes in our shop design, mixing common materials with richer elements. In this store, we’ve focused mainly on mirror, ceramics, wood and black metal.

DD: You have a wall of women’s collars displayed on custom made stands. What was the choice behind this?

Guillaume Henry: Collars are redefining the Carven brand, and I think the wall brings some humour to what we do. Sometimes I like the fact there are peculiar twists in things: we have benches covered in leather, and weird seats that look like kids toys. For the collars, I liked the idea of not just having one collar, but forty of them.

Dazed Digital: The crisp white collars in your SS14 women’s collection reminded me of Alicia Silverstone in Clueless. Was that character a design inspiration?

Guillaume Henry: Alicia was one of our references, but not a huge inspiration. When I’m working on a collection, I’m not actually very taken by fashion, and Alicia is so fashionable in Clueless. I was more inspired by Drew Barrymore and Liv Tyler when they were teen stars. They were a bit moody and you couldn’t work out if they were happy or not. I was definitely inspired by the nineties period, but by the girls less into fashion, and more cool by chance. 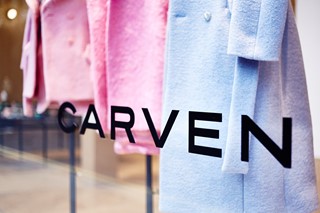 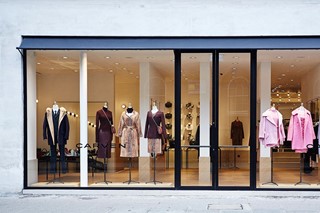 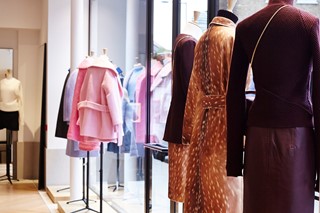 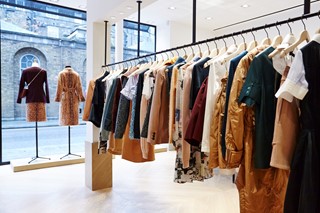 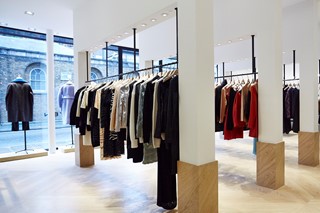 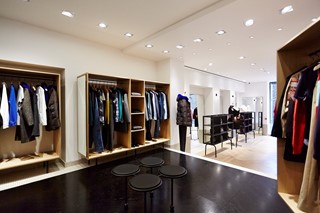 DD: The floral and check prints in the collection were reminiscent of Claire Danes in the TV show A So Called Life...

Guillaume Henry: It’s funny I never saw that show, but we had some pictures of her, and I liked that idea of cool girls in the nineties who were looking pretty but weren’t smiling.

DD: With your pink gingham checks and pastel camo prints, were you offering a more feminine take on a grungy aesthetic?

DD: ‘Where is my Mind’ by the Pixies was one of your SS14 women’s soundtracks. What memories does this song bring back to you?

Guillaume Henry: I’m not that inspired by fashion, I prefer an inspirational moment, and think about someone in my mind, almost like a film character. I ask “who is this girl? What is she like? What kind of music is she listening to?” For this season, I had in mind a girl at home who was still living with her parents. She wants to be I don’t know...an artist. I was like that when I was fifteen, listening to the sad romances of The Pixies. You listen to this music because you want to get the emotion that your own life doesn’t have. I was listening to sad music to get sad, but in a nice way. I really have no nostalgia at all, I don’t care about the past, but when I think of that time I smile.

DD: How easy was it for your to access that kind of music living in a small French village?

Guillaume Henry: Oh everybody was listening to the same music because of MTV. We had access to that kind of music because of America. At that time we were all into the same idols, you know like Kurt Cobain. We’d listen to a cool song for an entire year. The English words that we didn’t understand, we loved them anyway, because we had the sound and the mood. I love the international language of music.

DD: What other music were you listening to in the nineties?

Guillaume Henry: I was totally obsessed with a French band called Elmer Food Beat. I was a huge fan of Nirvana, The Prodigy and The Offspring. But then I’d also listen to Whitney Houston.

DD: Did your music taste change when you moved to Paris to study at the Institut Français de la Mode?

Guillaume Henry: Yes, it got a little more intellectual and a little more French. I listened to more music from the past. My parents were listening to Serge Gainsbourg when I was ten and I thought it was for old people. Then when I moved to Paris I realised how fantastic he was.

DD: You always initially rebel against what your parents listen to...

Guillaume Henry: Exactly, because its their choice. And then...I loved it.