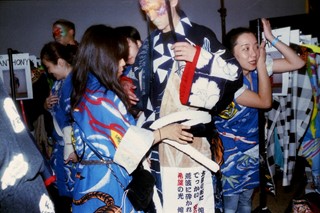 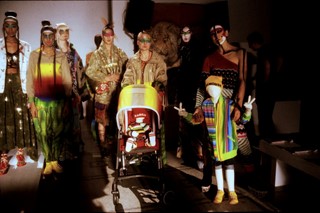 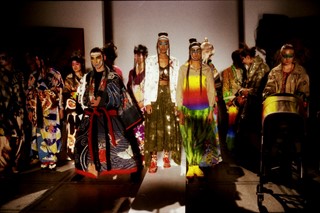 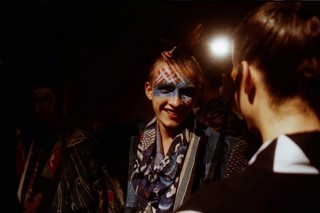 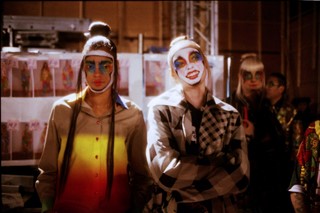 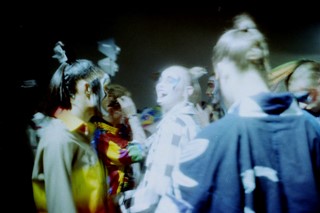 In 1971, Kansai Yamamoto ignited a fashion revolution when he became the first Japanese designer to showcase his work on a London runway, a decade before Rei Kawakubo of Comme des Garçons and Yohji Yamamoto debuted their tattered and torn collections in Paris. Since then, Kansai has become famed for creating androgynous and futuristic stage costumes for David Bowie – most notably for his Ziggy Stardust tour.

On Friday, during a unique one-night performance at the V&A sponsored by YKK fastenings, Yamamoto returned to the London runway for a live show that explored his forty-year career. The Fashion in Motion performance opened with one of the most iconic looks from Bowie's 1973 Aladdin Sane tour: a billowing red, white and black silk kimono, the back depicting a clownish open mouthed face, a futuristic  wide-legged jumpsuit in black PVC with shape shifting stripes, and a skintight one-legged jumpsuit with zig-zag patterning.

Yamamoto, renowned for fusing traditional and modern aesthetics, sent a spectral model down the runway wearing a holographic foil strapless gown, the skirt illustrated with an ocean scene inspired by the Japanese Momoyama period, with the bustier featuring an animated screen in the centre. “There are no other designers doing what I do,” Yamamoto explains. “My shows are how I feel at that exact moment in time.” The finale brought the show to a euphoric close as dubstep, Japanese opera and live electric trumpet blared while parasol-clutching models danced down the runway in a kaleidoscopic blaze of leopard print, polka dot and tie-dye.

Dazed Digital: Your stage shows are extremely theatrical, what does the performance element of your shows bring to the audience?

Kansai Yamamoto: After my shows people feel happy, and that is my dream. I try to create something that conveys more than just clothes. If I fell in love with someone over time I wouldn't remember what they were wearing, you also need to focus on the importance of the mind.

DD: How would you define your aesthetic?

Kansai Yamamoto: I have a very strong personality, and do not feel myself in black and white clothes. When I think of my shows, they are defined by colour. Before I came to London in 1971, I spent time in the jungles of Papua New Guinea, and was influenced by images of bright birds.'

DD: You created costumes for David Bowie's 1973 Aladdin Sade tour. How did this collaboration affect your career?

Kansai Yamamoto: David Bowie and I combined the worlds of seeing and sound, because musicians who want to be number one, want to wear the number one.

DD: You moved from the world of fashion and created 'Super Shows' in the nineties. What was the reason for this move into entertainment?

Kansai Yamamoto: I believe if you collaborate with many different genres you can create many things, and that is why I moved into Super Shows. I love watching the Academy Awards because they celebrate the power of the mind. Fashion cannot show everything, sometimes you need to offer more.

DD: You were the first Japanese fashion designer to show at London Fashion Week. What have your designs bought to Western fashion?

Kansai Yamamoto: I don't have an answer yet, I'm still working it out.