Geometric and bold, the set designer talks us through his architectural designs 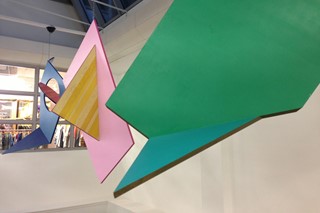 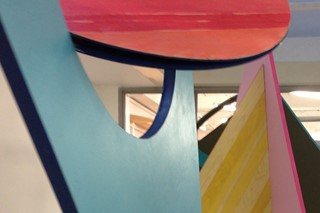 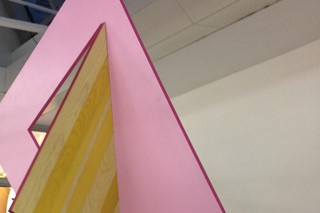 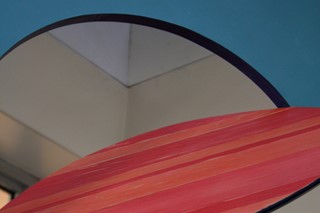 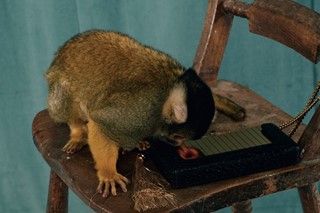 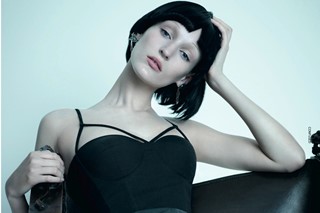 This month, Storey created ‘Folded Reflections Suspended’, a series of pop coloured rotating shapes, in collaboration with Opening Ceremony. The installation hangs from the ceiling of its Covent Garden store, and is the second sculpture in Storey’s ‘Explorations in Space’ series. Exploring the power of pattern and the malleability of materials, Storey created a sculpture to be displayed at Patternity’s Super Stripe exhibition in April, which was an assemblage of wooden stripes and mirrors. ‘I’ll always try to put my stamp on a project in some way,’ Robert explains, ‘but it’s really great to work with other people and really harmonise what you are doing…'

Dazed Digital: How has Shona Heath influenced your work?

Robert Storey: Shona is one of the most talented art directors I’ve ever seen... It looks kind of easy but there is nothing harder than trying to recreate a shoot that she does. Shona’s so good with materials, colour and the way that she moves things around. Working with her was so interesting; it made me really understand what art direction was... When I’d be making something and she’d come into the room and tweak it - that’s what made a really lasting impression, learning that it’s the small things you do not always the big.

DD: You work in both London and New York; do you think your style prescribes to the aesthetic of a particularly city?

Robert Storey: I think travelling anywhere in the world is inspiring and you should see as many different aesthetics as you can. If you are in Austria you should go and see a Gustav Klimt, and in America you should see a Donald Judd. Everywhere is inspiring; I don’t think of myself as particularly pinned down by one place, it’s more about my training as a ﬁne artist.

DD: You work in a variety of mediums, what is your favourite form to work in?

Robert Storey: The reason I moved into set design speciﬁcally was because I love how varied it is on a day to day basis. Last week I was on a big commercial job where I was making fake gym equipment, next week I’ll be painting a backdrop. Every day is different, and I think that’s what makes my job really exciting. I think I’m a bit ADHD actually; I have to be doing different stuff all the time.

DD: What inspired your Dazed & Confused cover with Frida Aasen, Sean and Seng and that mischievous monkey?

Robert Storey: I really love that Dazed is so young and experimental, it doesn’t feel like it’s trying to be too commercial or sell itself, it’s focused on being relevant...it’s a very London youth culture magazine.

DD: How did your collaboration with Opening Ceremony come about?

Robert Storey: I pitched an idea based on one that I’d done previously for Patternity – they recently did a series which was an exploration of space and balance and illusion. I also compiled relevant references of my own work based on stuff I’d done with Twin magazine, some still lives and sculptures, and references of things that I’m really interested in. Opening Ceremony went for the pitch and luckily didn’t want to change anything...

DD: You also worked with Opening Ceremony founders Humberto Leon and Carol Lim for their Kenzo Pre Fall ‘12 campaign. What do you ﬁnd so inspiring about the brand?

Robert Storey: Obviously all eyes are on Kenzo at the moment because of Opening Ceremony, and with the brand moving over from a classic French fashion house to something more contemporary. I think with brands like Kenzo, they’re really interesting because they’re so current and they’re developing a new identity. It’s become a breath of fresh air. That’s always really exciting for me, rather than trying to reference a brand that already has such a strong identity.

DD: It’s really interesting being part of a brand as its image evolves…

Robert Storey: I don’t speciﬁcally have such a passion for the clothes. I’m really interested in the way the collections are put together, rather than the actual result. Seeing how a design house has come from an idea of say having army prints with a poppy print, and then seeing how it then translates it back into a campaign is what really interests me.

DD: When you go through your initial design process, do you have any artists you constantly refer back to?

Robert Storey: I have a few core essentials that I’ll always love...My mood changes every season, one season I’ll be really interested in materials and specific colours, or I’ll see an exhibition that really inspires me. I’m always inﬂuenced by new things, but I think as a core, I always look at Donald Judd and Josef Albers. The Bauhaus movement is always a really strong point of reference for me. I also might look at someone, say the work of David Shrigley, and even though I won’t be inﬂuenced by his overall aesthetic, there’s something about his humour that will work really well. You really learn from those instances, to put those elements into your own work.

DD: Are there any contemporary artists that you seek inspiration from?

Robert Storey: There’s a guy called Rafael de Cárdenas who has an interior design company called Architecture at Large. I’ve become friends with him over the last few years and he’s been a really interesting person to talk to. He comes from a very similar reference point and always seems to pick up on trends before they happen. He’s very resourceful in the way that he works, and very intelligent. I really aspire to that, and in a way I treat him a bit like a mentor.

DD: You’ve worked a lot with ﬁlmmaker Quentin Jones. What do you each bring creatively to your collaborations?

Robert Storey: Quentin is probably one of my favourite people to work with. I did her second ﬁlm ‘Time Machine’ for AnOther, before she was represented by anyone. She’s amazing, we really understand each other’s aesthetic and there’s a really nice crossover in what we do. She’s got such an amazing femininity to her work and I think I can bring quite a masculine edge to it. I think my use of geometric block colour moulds itself really nicely to the photo montage illustration aspect of what she does...Quentin’s always chosen exactly what she wants to do and that’s a really good lesson for everyone. Don’t compromise on your own aesthetic, because you won’t be able to achieve anything.