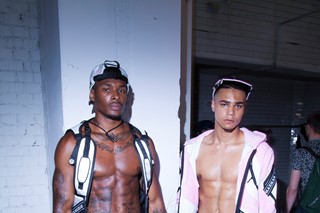 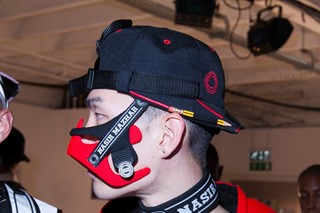 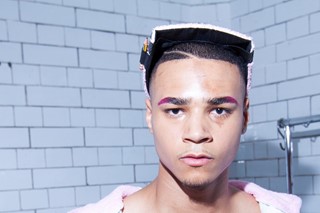 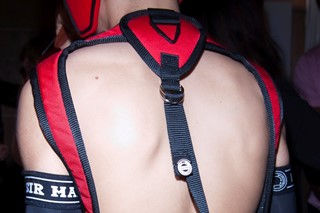 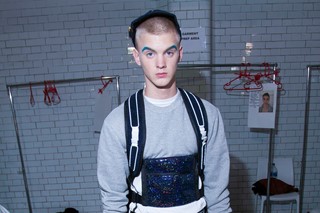 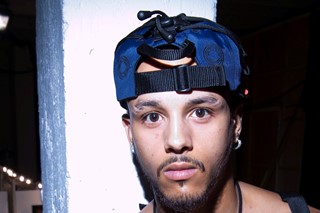 The week before Nasir Mazhar’s menswear runway debut, I visited him in his studio. It was the usual chaos you would expect to find in the run up to any show – fabrics had not been delivered and sewing machines were broken – but unlike other designers, this is when Mazhar is in his element. “You just have to forget any ideas that you had or finishes you wanted to do, just forget the planning of the collection and just make whatever you want freely,” he explained. “That’s what it is really.”

This season saw Nasir refine his own DIY aesthetic and reaffirm his position as one of London’s true visionaries. The show opened to the sounds of a pirate radio station, something he hinted at the week before when he told me, “If you’re talking about the attitude of the music, I suppose it is really rebellious, like it's illegal.” Then Nasir sent out his army of models, some covered in masks others wearing full tracksuits. There were so many great details this season, garments were held together by straps with ‘Nasir Mazhar’ printed over it, almost adding a bondage feel to his streetwear aesthetic. Sequins formed details on jumpers, shorts and tops were tied together to reveal some buffed up six-packs.

Before I left his studio last week I asked him how he saw the relationship between the Nasir Mazhar girl and boy. “Oh they’re boyfriend and girlfriend, definitely,” he responded. “They’re just as tough and as hard as each other. I just think of it as Biggie and Lil’ Kim, he was a rapper and she was a rapper. They were both really, really good. He was the male version of her, and she is the female version of him, that’s how I see it.” If his menswear collection reached new heights this season, then I’m sure his womenswear show will follow suit in September.