Opening up her personal archives, the designer-turned-DJ who reigned over London’s 80s clubland with Leigh Bowery tells us that all she ever really wanted was to break taboos

Feature taken from the February Issue of Dazed & Confused:

In 1983, when Rachel Auburn and Leigh Bowery first revealed their collections to a New York audience, it caused a riot. The Evening Standard wrote: ‘Screams were heard on the subway last week, not another mugging, but a couple of young British designers...’ The designs were made from rags found on the streets of London, sewn together and later sold in Manhattan department stores Bloomingdale’s and Macy’s, to protests by outraged New Yorkers. From the very beginning, Auburn’s career has been about provoking a strong reaction: both with her unconventional designs – some involving reverse swastikas – and with her involvement in London’s underground club scene. Today her work has a cult following, collected by the likes of Louis Vuitton creative director Kim Jones, but what exactly made her clothes the source of so much outrage?

“I never felt a fear of failing because at that time it felt like anything was possible,” Auburn explains, sipping a cup of tea at her kitchen table. “There weren’t many fashion magazines around so you had to discover it all for yourself.” The origins of her highly experimental designs lie in Kensington Market, where in 1982 she set up her own stall. “I called it Vena Cava because I thought it sounded romantic,” she laughs. There, she began selling her own designs to the public and experimenting with the deconstruction and manipulation of fabrics. Her tie-dye pieces were made by dipping fabrics into oil and coloured water to create organic patterns, while jumpers were constructed by stitching together rags found on the street to create wearable tapestries. “I never wanted to be part of the establishment. Even at college you were basically being primed to go and work for Marks & Spencer.”

It was at Kensington Market where Auburn first met Bowery. “It is quite funny, I noticed him because he was wearing the biggest shoulder-pads I have ever seen. I used to laugh, but he braved it for a while.” The two became close friends and collaborators, regulars together in an underground club scene alongside other visionaries like designer Judy Blame, artist Trojan and designer/photographer Michael Costiff. “The clubs were all quite riotous, and because it was pre-Aids the vibe was that anything goes,” she says. This mentality bled into her designs. Rejecting the over-embellished and structured silhouettes of the mainstream, she ripped out shoulder pads, leaving garments to hang freely. They were almost organic, at times trampish. The stripped-away aesthetic soon developed into a look that The Face labelled Hard Times.

Through the underground club scene Auburn and Bowery met highly influential nightclub impresario Susanne Bartsch, who invited her and other designers like Blame and Bodymap (aka Stevie Stewart and David Holah) to showcase their designs together in New York in early 1983. “New York was such a buzz,” Auburn remembers now, “but we didn’t have any money and we didn’t know anyone. We were being put up by somebody who had written to The Face, but she lived in a grotty studio in Harlem full of cockroaches.” The show was called New London New York and was presented at The Roxy, a roller disco in Manhattan. There Auburn was introduced to Malcolm McLaren and prominent fashion enthusiast Pinkie Black, who has the largest archive of her collection to date. “After the show Pinkie said we could stay at her apartment in Gramercy Park because she was going away for the weekend. So we moved from this dingy flat into this gorgeous apartment, which had guys in armour outside. I remember it was all candy pink, full of confetti and balloons. It must have just been her birthday, so we were very naughty and invited everyone from the show over to have a massive party.”

Today, it is difficult to recognise Auburn as the peroxideblond rebel in her photos from early 80s New York. She is still incredibly beautiful, but has grown out her hair and at times appears to be quiet, and almost shy. But then she shows me the infamous Evening Standard article, featuring an image of Bowery and Auburn sitting in a New York dustbin wearing rag clothes – the photograph that provoked frenzy. Following the international acclaim received from that debut, she took the outrage one step further by telling Blitz magazine that her work was made from tramp’s clothes picked from the street, adding, “I’m very good at making rich women look like old gypsies.”

When Bowery was asked by club entrepreneur Tony Gordon to front a new night called Taboo, at Maximus in Leicester Square, Auburn became a regular DJ. As photographer and friend Mark Lebon says of the night, begun in January 1985, “Taboo was where the creativity and freedom of punk took some wildly creative souls.” It became a playground for Auburn to showcase her designs – as soon as something was made, it went straight to Taboo. That year Auburn and Bowery opened a new Kensington Market stall together, called Spend Spend Spend.

She shows me a scene from Hail the New Puritan, a 1986 fictionalised documentary by video artist Charles Atlas about dancer/choreographer Michael Clark, which characterises the theatrical mentality of her gang and gives an insight into that experimental world. It features Bowery, Trojan and Auburn getting ready to go clubbing in the living room of Bowery’s flat in Watney Market. The walls are completely covered in Star Trek wallpaper. “We used to call it ‘Aladdin’s cave’,” she giggles. “It was like an acid trip.”

The scene itself, featuring several extravagant costumes, all made by Bowery, is more like a fashion show or a piece of staged performance art. There’s a visit from Clark, who spends most of his time combing his mohawk, and Auburn tells Bowery to get a facelift.

“I feel quite sad watching this,” she says, “because both of those guys (Trojan and Bowery) are dead. They have all disappeared. I guess there was a time where it all kind of climaxed with this whole explosion of people taking drugs and dying. I started taking heroin myself, but I didn’t become an addict. I was very fortunate because Leigh took me away from the place I was living in with a boyfriend. So I moved in with him. Trojan lived there too for a bit and then started going out with John Maybury. Unfortunately, Trojan was also taking drugs and he overdosed when he was 20.”

Despite her commercial success, Auburn realised that “there wasn’t ever a sound business-plan behind (her brand) and it couldn’t really have gone any further than it did.” She believes the only person in that scene who managed to cross over and do well was John Galliano, and that she always lived with a hand-to-mouth mentality. “There were simply not the possibilities. It was impossible to manufacture without backing and money. I guess that is just the way of the world.”

Surprisingly, she doesn’t own any of her original designs, just a small collection of old photographs. “I don’t really get attached to things,” she says, “I guess other people kept hold of them.” Aside from Pinkie Black, the biggest collector of Auburn’s work is perhaps Kim Jones. “I first saw Rachel’s work on the pages of i-D and The Face alongside Leigh Bowery,” he says. “I loved the way they dressed up. They created a proper look. It was extremely London and innovative.” Jones owns 35 pieces and has two particular favourites, a “giant polka-dot brown frilly shirt made of various textured and printed fabrics” and “a dress made out of several sari fabrics layered together, which I have in a few different fabric variants. Rachel’s fabric use was very different to Leigh Bowery’s as it was lighter and seemed more designed for movement than body manipulation. The dress is now safely kept at a certain Ms Moss’s house, as she loved it so much!” 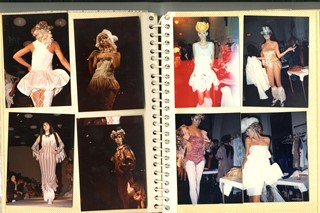 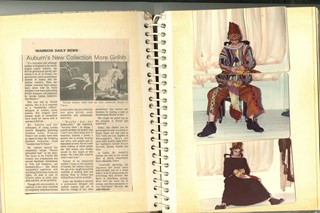 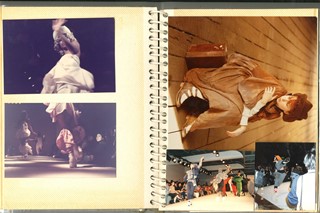 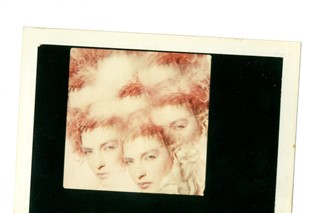 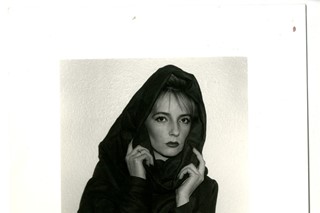 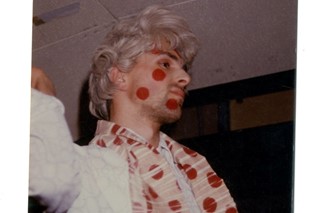 Music and fashion began to overlap one another when Auburn met artist Dick Jewell, the father of her son Jack. “Then I became a DJ,” she says. “I think I became more well-known as a DJ than I did as a fashion designer. I certainly made more money!” Soon she was performing all over the world, to huge audiences, becoming the first female DJ to play in China. “It was really odd. Before the gig they organised the press to come to my dressing room in this trance club, and one of the newspapers asked me if all the women in clubs in the west were prostitutes!” She also met John Truelove, who soon became her partner. “He was part of this club called Trade, which was the first all-nighter gay club.

They didn’t open until 4am on a Sunday. There was nothing like it and it was always rammed. Then I started making music and he supported me. He let me experiment and at the beginning of the 90s, I began making hard house.”

Bowery also began moving in his own direction. “He started posing for Lucian Freud and doing his performances,” she continues. “I never met Lucian. I guess I was always a bit sceptical about Leigh’s motives, but I realised they had a really good friendship and that he really enjoyed posing for Lucian. Leigh knew he was going to be immortalised by him.” Bowery died at the age of 33 at the very end of 1994 from an Aids-related illness.

During the 1980s, Auburn had a major impact on two distinct scenes and even today her garments still have a cult following. Is it strange for her that people have continued to reference her work so many years later? “No, it doesn’t feel weird. I like it. I think it is just the natural way of things – everything works in cycles. Designers always look back to the past as a reference. I certainly did.”

Auburn currently lives in Chiswick and teaches yoga. As we look through the old photographs she laid out on her kitchen table, I ask if there was one particular moment that really stayed with her. “Being around Leigh was the best thing ever, without a doubt,” she answers. “I remember going with him to the opening of the Palladium, which was the next big nightclub after Studio 54 in New York. I remember Andy Warhol walked in with Keith Haring and Leigh just walked up to them. Andy was like, ‘Stay away from me.’ I found that pretty exciting,” she says, smiling. “I guess it was all really fun. Sometimes we would just go over to Derek Jarman’s warehouse in Wapping and he would be making a Super 8 film with the whole crew.”

In many ways, Auburn’s own cult following is inextricably linked to her relationship with Bowery and the riotous scene that they immersed themselves in. Together, they provided a platform to push boundaries, experiment and provoke reactions. “At one point he was living under my cutting table on All Saints Road,” she says, smiling. “I think my work gained a cult status because they were quite original garments. I don’t think anyone had put things together in that English deconstructed way before. But it also has a lot to do with my association with Leigh. He became such an icon. Looking back, the 80s were so different from now. I never felt constrained by anything and I was very free.”