Guys go glam with lots of snakeskin, ombré dyed trousers and patterned shirts, in looks that are sure to make a statement 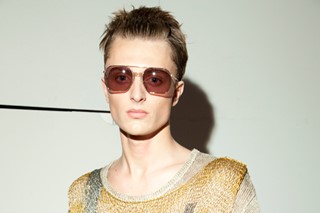 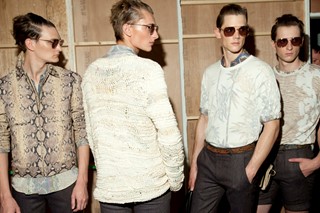 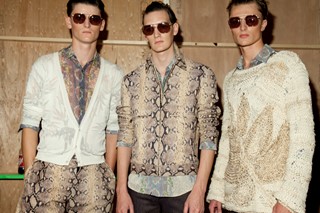 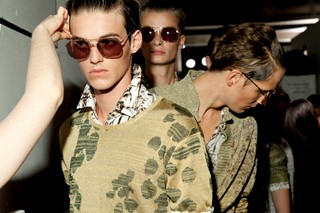 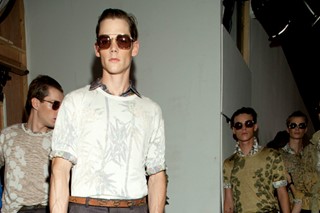 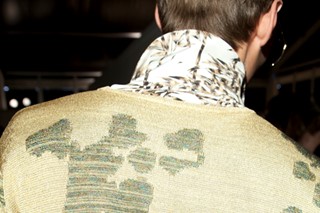 The second show of the week for Mr. James Long who had his womenswear line show as part of the Fashion East presentation on Sunday. For men James proposed a seriously glammed up look, harking back to the golden days of Iggy Pop and Brian Eno for his mood. Snakeskin made an appearance in a number of forms throughout the entire collection coming up in golds, naturals and various dyed colours. Snakeskin print shorts were teamed with tropical leaf print shirts and knit cardigans. The snakeskin again appeared in an ochre coloured blouson with a bamboo leaf knit.

Then it was onto more of a knitwear focus, something James is known for in his women's line. Loose weaves and patterning appeared in the long jumpers with neckline detailing. Deconstructed tshirts also made an appearance, teamed with a snakeskin backpack and then onto ombré dyed trousers and jeans, all adding to a luxurious but completely laid back aesthetic. A long belted gold knit cardigan was another example of the relaxed feel, loosely falling over the body and teamed with herringbone weave trousers. Statement pieces included a snakeskin front and simple cotton back Harrington, a shimmering python and gold lamé trench and a gold snakeskin and transparent patchwork biker.

Dazed Digital: Where did the snakeskin inspiration come from?
James Long: I started off with the Gardens of las Pasos, which was a surreal garden created by the sculptor Edward James. It took him 20 years to build that garden, its really full of snakes and tropical elements, frogs and then around the same era were Eno and Iggy Pop so that was a reference too. The way they dressed had a lot to do with the direction of the collection, and then from the garden we wanted to bring in that dry and tropical feel.

DD: Is that where the glam elements came from?
James Long: Yea well actually we really wanted to dull down a lot of the shine although I'm sure it still looked really spangly. We didn’t actually quieten them down quite a bit as well.

DD: Do you transfer ideas between the two collections?
James Long: Yes we do and this season there were quieter a few references that went between the two of the collections, obviously the snakeskins but then the glam ideas as well were big in both.

DD: Where did the patchwork elements come from?
James Long: Well actually that is down to the use of Anaconda. They can only be so wide so we had to use a number of them to build up the piece but also it had to do with an idea of the horizon, which came from looking at the gardens. I wanted to give a feeling of a sunset. If you look at the shirts they werent from light to dark, we changed them around to give that horizon feel.