The SS23 fashion season kicked off in New York last Friday, bringing with it big back-to-school vibes. Summer isn’t over in the big city though, where temperatures both on and off the catwalk were soaring and the beauty was just as hot. Supersized hair was seen at Collina Strada and No Sesso with extreme braids and sculptural hairstyles that reached up to the heavens, respectively.

Models at Puppets and Puppets were covered in everyone’s favourite pimple patches Starface, while the looks at Raul Lopez’s Luar were inspired by his aunts’ over-the-top beauty at family reunions – think classic updos, black lips and feathers to add some extra drama.

At Barragán, the provocative looks included massive fake filler lips, “meth teeth”, mullets and Karen wigs. Presented amidst a music festival from hell, the show was a social commentary on the state of America, its “business as usual” culture and whiteness.

Here are the boldest beauty moments from NYFW SS23.

At Collina Strada, models including Alva Claire, Hari Nef, Aaron Philip and Ella Emhoff took to the runway to show off the psychedelic, sustainability-centric collection. With Evanie Frausto at the helm, hair was slicked back with pink, green and alabaster clay at the roots, while extreme XXL braids were so long they had to be carried by the models.

With attention on the hair, make-up was kept light by Marcelo Gutierrez with flawless, glowing skin and healthy complexions.

Evanie Frausto popped up again at Luar, where the beauty was inspired by the looks Raul Lopez’s Dominican aunts used to turn up to family gatherings in. Classic 80s updos were given to models like Drag Race winner Symone, while for make-up it was all about eyeshadows in rich purples with dramatic wings and black glossy lips. 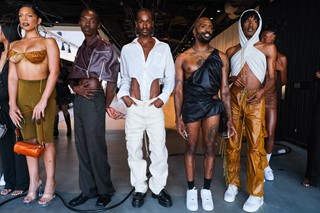 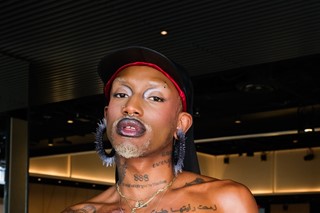 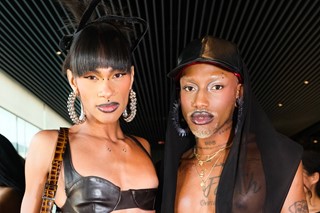 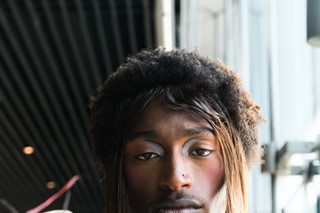 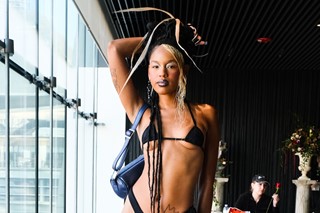 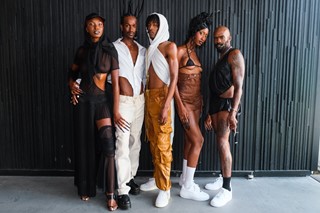 The beauty highlight of NYFW was No Sesso, where both hair and nails were given an extreme makeover. Thanks to hairstylists Malcolm Marquez and Fitch Lunar, hair was sculptural and experimental, often defying gravity by reaching up into the heavens from all different angles. For make-up there were lips lined in black kohl, metallic silvery eyeshadow applied to the inner corners with a black outline and dramatic pink blush thanks to make-up artist Sinn Apsara.

On nails was Yukie Miyakawa and assistant Miku Tsutaya who created XXL manicures in metallic silver and glossy black. Some sets were blunt while others curled over, at least as long as the models’ fingers.

Dewy skin was taken to the extreme at Eckhaus Latta this season. Make-up artist Fara Homidi applied a thick layer of glaze to the model's faces so they were glistening like doughnuts in the sun. Otherwise, make-up for the models, who included Caroline Polachek and Paloma Elsesser, was kept minimal with the occasional subtle mauve accent, while Tamara McNaughton on hair created what she described as hyper natural mullet cuts and otherworldly long hair.

This season Puppets and Puppets sent a collection down the catwalk that was inspired by Nicole Kidman in Stanley Kubrick’s Eyes Wide Shut. Accompanying the looks was make-up by Fara Homidi, once again, who created bold and glittering two-toned eye looks and dewy skin accessorised with butterflies below the eyes or, in the case of Caroline Polachek, across her chest.

Some models also walked the runway with black stickers in the shape of stars – familiar to anyone who has ever used a Starface pimple patch, which made its fashion week debut. While some had the stars dotted sparingly around their faces, others were absolutely loaded up, with arms covered in them elbow to fingertips. On hair, Blake Erik kept things natural so as not to overload the looks.

At Dion Lee, Isamaya Ffrench used her newly launched make-up brand to create a two-toned chameleon look. Taking the shades “Belt” and “Machine” from her Industrial palette, Ffrench used an airbrush to apply the shadows over mesh for a fish-scale-inspired effect. If you want to create the look yourself, check out our tutorial with Ffrench here.

Keeping the focus on the make-up, hair by Mustafa Yanaz was natural, while nails by Juan Alvear were short and glossy with a simple black line down the centre.

Pastel gradient halos and wet-look waves created a beach beauty look at Marni where the theme was sunsets. On make-up Yadim painted faces in colours of the sky at dawn and dusk: oranges and yellows, blues and whites. Holly Smith on hair made models look like they had just emerged from the water with slicked hair and tousled, beachy waves.

Yadim and Evanie Frausto (third time lucky!) teamed up at Barragán for the beauty which skirted controversy with massive fake filler lips, “meth teeth”, mullets and Karen wigs. A social commentary on the state of America and its culture of “business as usual” even amidst disaster and collapse, the show was presented on a set littered with rubbish, fake money and graffiti.

Blonde bobs with highlighted side fringes and spiky at the back looked like they were taken straight off the head of Kate Gosselin, while mullets, bleached blonde extensions and gelled twists made clear what designer Victor Barragán thinks of a certain type of whiteness. Meanwhile, Yadim gave models botched fake lips, teeth that were mostly fallen out, bad tan jobs and dirt-covered faces. 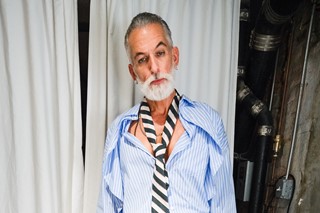 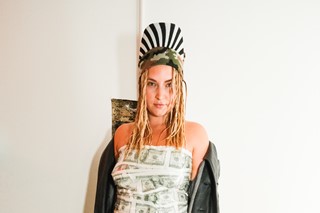 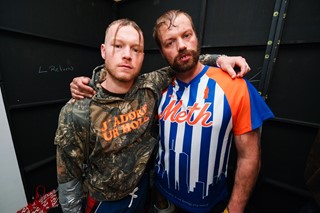 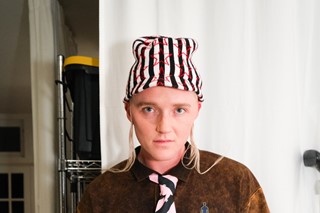 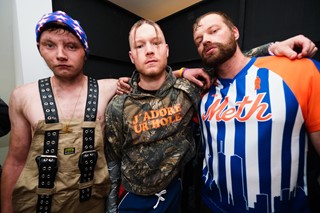 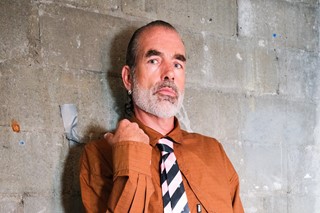 Closing out New York was Tom Ford was the hair was big, big, big. Courtesy of Jawara, the hair was teased into voluminous, sex curls which perfectly complemented all the sequins and disco cowgirl at Studio 54 vibe of the collection. One of the models was given an incredible braided headpiece that stole the show.

On make-up Yadim popped up again, creating smudgy, smokey eyes adding a rocker edge. Lips were kept neutral, the the skin fell just on the sweaty side of dewy – the result of nights spent dancing away at the disco maybe.