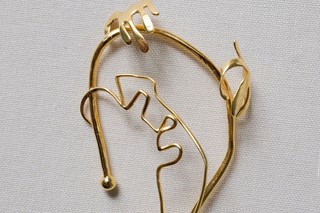 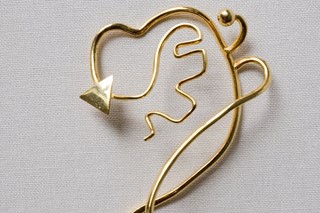 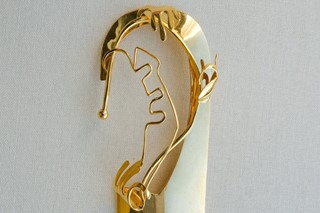 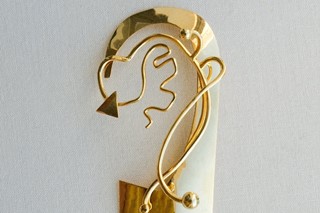 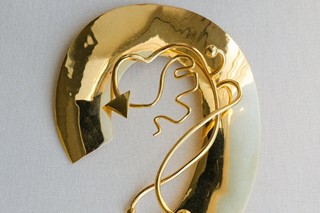 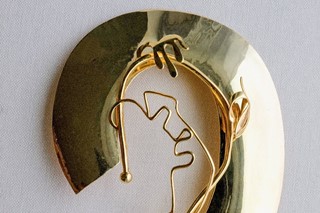 Since the age of four when he received his first hearing aid, actor, artist and activist Chella Man has struggled with the disconnect of wanting control over how he presents his body and the aids and implants which never felt like him. “I always found myself brainstorming ways to reclaim the machinery that had become a part of me,” he explains. In an effort to take back that control over his body, Man has teamed up with streetwear brand Private Policy on a new collection of flexible ear jewelry designed to not only work easily with but also accentuate hearing devices and cochlear implants.

Drawing on Man’s distinctive artwork, the limited edition collection includes eight sculptural gold-plated ear cuffs priced between $330 to $620 with 50 per cent of profits going to the Deaf Queer Resource Center. Works of art themselves, the pieces were created to amplify one’s Deaf identity without overshadowing it, to celebrate it without being identified by it. “Upon positioning it on my ear for the first time, I felt the disconnect vanish,” says Man. “Redefining the machinery with my art replaced the rigidity with fluidity.”

During the design process, Man was part of an artist residency in Brescia, Italy and became immensely inspired by the history and culture of the city, leading him to incorporate elements of it into his designs. “I found myself mesmerised by the art there,” he says, sharing that a particular influence on the pieces were the hilts of 16th century rapiers found at the Brescia Castle. As striking as the pieces are, they are also functional – a crucial aspect of the design and one that proved somewhat tricky to ensure. Man and the team worked for months to create pieces that were easily modifiable and customisable but in a way that didn’t impinge on the design or lead the cuffs to break. While the pieces were created with the Deaf and hard of hearing communities in mind, they were also designed for friends and allies of the community who Man hopes will also wear them in pride and solidarity.

Accompanying the collection is a campaign short film written, edited, and directed by Man who also stars in the film alongside model Rayly Aquino and dancer Raven Sutton. Taking place underwater, the ethereal video titled The Beauty of Being Deaf sees the three share a poem with an important message about the Deaf and hard of hearing community. “When you think of beauty you’re not taught to think of me,” Man signs in the video. “We are often told: we have lost. We have a loss. We are at a loss.”

“In the face of prejudice, we gain strength,” continues Sutton. “Other senses heightened, coming together to form a dynamic perspective of life we will always carry.” The film ends on a poignant note from Man as he asks, “And how beautiful is it to be able to communicate underwater.”

Speaking about the campaign, Man says that he has manifested this film since childhood and it has grown as he has. “Sharing this poem and film with the world now, is representative of the community I have since found and the extent from which I’ve healed from ableist trauma,” he says. “Shooting this piece required both the cast and production’s full hearts as we waded into our vulnerabilities. This energy constructed an intimate atmosphere which filled the set, even when we were off-camera. I am forever grateful and proud of the healing and connections that were created this day.”

Watch the film below and head to Private Policy to check out the collection here.