Listen to our new podcast, Growing Pains, a candid conversation with musician Kelsey Lu on her unusual childhood in North Carolina, and how it shaped who she is today

Enter the luscious world of Gucci Bloom, the first Gucci fragrance developed wholly under creative director Alessandro Michele’s vision. To celebrate the trio of fragrances, Dazed Beauty has partnered with Gucci to profile three women who champion the values of the Bloom fragrance family: self-expression, authenticity and vitality. Three creatives who are the ultimate feminine icons for the modern world. First up, musician Kelsey Lu.

Animegvrl’s AR make-up is bringing beauty into the future

The way we think about beauty today means that you can grow up as an outsider, the weird kid at school, the person who no one understood, and then leave and become something, harnessing your difference to stand out as beautiful, or to become a master in your field.

Dazed Beauty’s new podcast series, Growing Pains, is a candid conversation with these people, the people who grew up outside of the box, took that experience and transformed it. We invite our favourite creatives to reflect on the moments, the friends and the struggles that had an impact on their lives, asking how the lessons they learnt from childhood to adulthood have shaped their work, their outlook, and the way that they choose to present themselves.

“As a child, I was more focused on the creative side of life. It was just natural, it was just like drinking water,” says Kelsey Lu, who features in our very first episode of Growing Pains. “But I always felt really within my own world, beyond the environment I was within.” 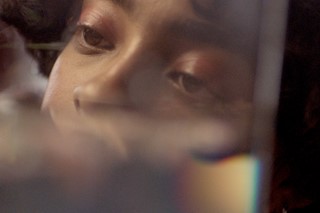 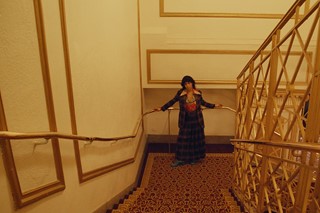 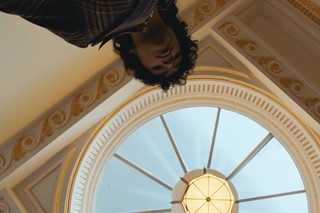 Since emerging as an artist with her haunting debut EP, Church, in 2016, Kelsey Lu has collaborated with everyone from Solange to Florence Welch, as well as creating a soundscape to accompany designer Grace Wales Bonner’s SS17 show. But it’s Kelsey’s early life that we’re most interested in; the classically trained cellist and singer was raised in North Carolina as a Jehovah’s Witness, before leaving her home and her religion behind at the age of 18. Her most recent singles Due West and Shades of Blue, which came out earlier this year, are profound reflections on hope, peace, home and the self.

Kelsey Lu’s music is rich, evocative and eerie, it wraps you in a dream you don’t want to wake up from, but you know that when you do everything will have shifted slightly. Her ethereal vocals intertwine seamlessly to create music that is a series of contradictions: celestial yet earthy, lonely yet warm. It evokes a lingering, mournful sadness but also an escape from reality. Her aesthetic echoes the honesty of her music. Embracing natural beauty, Kelsey Lu is unapologetic about her body hair which she proudly displays despite the criticism she receives for it online, and whether she wears her hair in a natural afro or elaborate braids, the musician stays true to her cultural roots.

Sitting down with Kelsey Lu in an empty theatre in London, Dazed Beauty Contributing Editor and co-founder of gal-dem, Charlie Brinkhurst-Cuff, asked the artist what it is about her past that drives her to perform today, what she’s had to overcome to get here. From growing up in a musical home, to taking comfort in Black Twitter, here Kelsey Lu shares with us her history.

Read an extract below and listen to the podcast for the full interview.

Do you think that your upbringing was quite different from other people's?
Kelsey Lu: I feel like my upbringing as a child was normal to me because that's what I was in at the time and I didn't really know much different. My world was pretty isolating, which I was also didn't really realise until I was older, how isolating it was, but my parents also did a good job of having a lot of love in the home and providing with us with enough things to do to occupy our time and creativity. Music was one of those things that occupied most of my time. So, instead of focusing on the everyday mundane things, I was more focused on the creative side of life, which took up a lot of my mind and time, and I guess social life.

What is your first memory of music in your home, because both of your parents are musicians…
Kelsey Lu: The first memories of music in my home… my dad, he played the percussion, and my mom played the piano, but my dad is mainly a portrait artist so he would always have his studio at home. So he would be working late at night and would be doing a portrait or framing something and would be playing jazz really loudly and me and my sister had just gotten out of the bathtub and my mum had just brushed out our hair and he would be playing the music really loud and we would be in the living room and our hair would be brushed out and we would be like jamming and rolling our head around and popping it up and down and I feel like that's one of my favourite memories as a child... just, I don't know, that feeling of freedom and of rhythm and music and interaction with that. It’s intertwined with the life of my parents and their influence over that part of me and who I am with music.

I know that you are really into fashion and beauty, who from history epitomises a beauty that you admire and why?
Kelsey Lu: That’s hard! Who is the first person that comes to mind? Oh yeah, that's so hard because there are so many different qualities of different people, but OK, qualities of somebody I admire... in male form I would say Sun Ra because his sense of expression was so unique and it was riddled in black power and then for a woman, the first thing that comes to mind is Sade because she is just a classic beauty staple. When you hear Sade you immediately have an image of who she is in your mind and it’s just a simple natural beauty.

Is there anything that you would change about yourself, moving forward? Anything you are working on internally that you want to develop?
Kelsey Lu: I feel like I am constantly working on self. I think when you stop working on self then you’re stopping your growth. You should never be too content with yourself, so I'm constantly evolving and growing. Maybe something that I would change or I'm working on right now is having less judgment about things that I know less about, and that stems from the way I may have been raised, in a sense of that protection and isolation. So letting things go more.