She’s a girl giggling on a beach wearing a feathered headdress, sharing a candid moment with photographer Corinne Day. She’s a young woman standing casually in a black tank top and knickers for Calvin Klein, head tilted, gazing forcefully down the legendary lens of Herb Ritts. She’s a butch biker girl snogging Lea T on the cover of LOVE magazine, shot in solarised black and white by Mert & Marcus. She’s a party animal, hanging from a top-floor window with a fag in her mouth; an English rose in an ethereal, beaded chiffon John Galliano wedding dress, surrounded by bridesmaids in the Cotswolds countryside. And yet, whether it’s a grainy paparazzi shot from muddy Glastonbury or a high fashion shoot plastered across a Times Square billboard, it’s unmistakably Kate Moss.

She has a face so recognisable, so completely ubiquitous, that it takes serious pause to consider what lends it a unique magic. If anything, what defines her is an indefinability, transforming from innocent ingenue to coquettish sex kitten to imperious madam in the blink of a (kohl-rimmed) eyelid. In any given interview with photographers or stylists that have worked with Moss for decades, they say it’s this versatility that makes her so unique. Where beauty norms have shifted and mutated, Moss’ appeal has never faded – no matter how many times they shoot her, how many outfits they put her in, the image looks and feels new, special.

“The most curious fact about Kate Moss is her staying power,” says Dr Ashley Mears, an associate professor of sociology at Boston University and a leading critic of the warped power structures that steer the modelling industry. “She’s managed to stay trendy in a world that is by definition predicated on change. This can be partly attributed to her strategic alliances with the right brands and collaborations and friends – she’s at the centre of a highly desirable network of high profile creatives.” As Mears notes, it’s not just her looks that have secured her legacy: it’s her character, social circle and lifestyle, which are, ironically, aspects of her identity she has aimed for many decades to conceal from the public eye.

It seems surprising in retrospect that she never publicly challenged the wild child image built up by tabloid media, even if it’s in keeping with her famous mantra: never complain, never explain. Moss has weathered the storm of gutter press mudslinging by – in the words of another public figure with her fair share of scandals – excluding herself from the narrative. Where many celebrities would have responded with a tell-all book or a weepy Oprah interview, Moss maintained a dignified silence. As the late A.A. Gill wrote in a 2006 piece on Moss for Vanity Fair, ‘by instinct or design, she’s understood a lesson from our clamorous, cheap-talking, opinion-clogged age – that less is more.’

Dr Joanne Entwistle, a reader in culture and creative industries at King’s College London specialising in the sociology of fashion, agrees that it’s Moss’ unique position within this vector of beauty and charisma that has guaranteed her longevity. “It goes without saying that Kate Moss is incredibly beautiful, but it’s also true that when you step inside any model agency you’ll see dozens of beautiful girls, most of whom will never go onto become household names. Today’s models don’t become successful solely by being icons as with the old Hollywood icons of beauty like Ava Gardner or Rita Hayworth, who were more stylised and remote. Celebrity beauty works differently now. The appeal of Kate Moss is partly to do with looking like someone you could have a laugh with – someone to party with.”

As Entwistle observes, Moss’ iconic status is built on a foundation of ordinariness: the girl from Croydon done good, the jet-setting model who enjoys a night on the tiles in central London as much as the rest of us. It’s a cultish obsession with her private life that led previous British Vogue editor Alexandra Shulman to put her on the cover 32 times, with every Moss-covered issue resulting in bumper sales. “The meanings attributed to Kate Moss are very powerful and, by this point, iconic,” adds Mears. “She invokes cool in everything she does. Even her mishaps are understood as cool.” 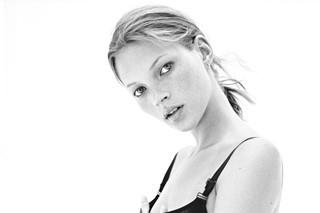 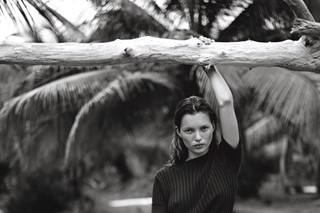 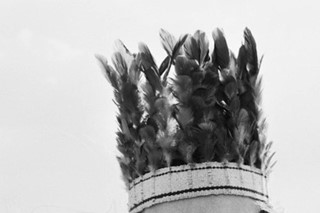 And yet, there is something in that face, in Moss’ indescribable allure, that appeals to a customer with zero knowledge of her private life. Artists from Marc Quinn to Peter Blake have immortalised her as a paradigm of female beauty: is there a scientific model of physical attractiveness that could explain this? “If you look at the canon of Western beauty for the last two hundred years, she sits within it: white, thin, blonde, young,” explains Mears. “She is described as waifish – that is, she was shorter than most models in the 90s – but in reality, it’s a small difference.” Entwistle agrees: “A scientific approach to beauty would say it’s all about symmetry and proportion, but I find that reductive. All models do have symmetry and proportion, but not all symmetrical faces are beautiful. It’s about other qualities that are ineffable or harder to define.”

Dr Elizabeth Wissinger, a professor of fashion studies and sociology at the City University of New York, has a broader theory for what makes Moss’ beauty so particular: that she burst on the scene at a time of profound change. “She came to the fore just at the moment the fashion industry, and modelling world within it, shifted radically,” says Wissinger. “Baubled and emblazoned fashions gave way to flannel tied shirts and army boots. Moss's almost ethereal appeal was better suited to the scaled back feel of fashion in the early 1990s, and hers became the iconic look that came to reign supreme. She was the antithesis of the reigning crop of Amazonian supermodels with legs for miles, hair out to here, and boobs to match.”

While Moss does share many of the basic physical attributes outlined by Mears – “white, thin, blonde, young” – within the narrow parameters of what constituted beauty until the increasing diversity of high fashion in the past few years, her beauty was in some way radical. The delicate features, the make-up free, grungy insouciance and the delicate proportions of her body were a world away from the imperious high glamour of the generation that preceded her. The closer you look, the more you recognise the unusual configuration of her face: the raised cheekbones, the thin, piercing eyes, small nose, wide jaw and toothy smile.

Take the various representations of Kate Moss by contemporary artists. In Marc Quinn’s sculpture series, Sphinx, she becomes strangely hard, almost simian. An even creepier vision of Moss comes courtesy of the Lithuanian artist Edgar Askelovic, riffing on that ancient ideal of female beauty, the Venus de Milo. The cold stare of the silicone sculpture makes a convincing case for Moss’ beauty being greater than just symmetry or proportion. Once you remove the face from the idiosyncratic spirit that inhabits it, it loses its impact, becoming almost eerie.

However neatly she fits into this criterion of beauty that has held fast for centuries, Mears suggests that the most radical chapter of Moss’ career is just beginning. “I think Kate Moss holds truly groundbreaking potential as she ages, because that is one barrier in our repertoire of beauty that is almost rarely broken: the near invisibility of older women as beauty icons.” It’s an observation that’s hard to argue with. Even if the success of Moss as an archetypal vision of female beauty over the past few decades can be rationalised or explained, her enduring appeal as she reaches middle age is a powerful two-fingers-up to an industry that prizes youth above all else.

It isn’t just the Moss of past and present that’s compelling. It’s the future Moss. Even a post-digital artist like Jon Emmony can visualise her in a new light: as a pearl-encrusted space siren, looking towards a bold new phase of her career. “In a world of AI we don’t really need models anymore – there are Instagram accounts of models who are entirely computer generated,” says Entwistle. “However, I don’t think that’s the future. I think we’ll always take an interest in seeing different beautiful faces that we want to relate to. In that way, models like Kate Moss will always have appeal.”

No amount of scientific analysis of the beautiful body or the symmetrical face could ever capture the incandescent spirit that draws Moss’ collaborators to work with her again and again – and no AI model could ever replicate that messy compound of personality traits to achieve the same kind of unending appeal. When it comes to defining beauty, science can only explain so much. “There was no one like her before,” adds Wissinger, “and although many who've come after may resemble her, there will only ever be one Kate Moss.”