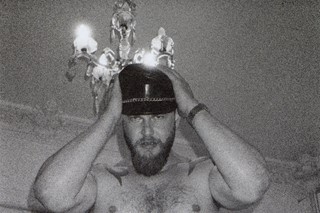 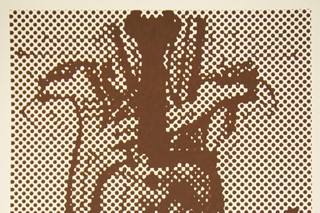 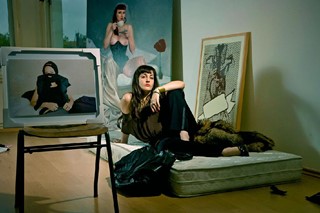 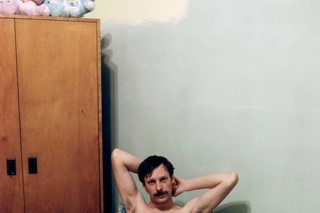 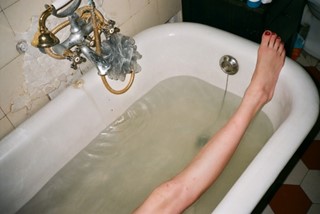 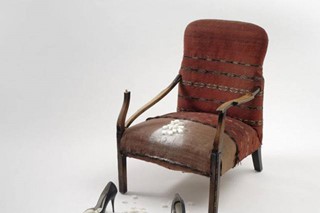 This month, the curator, writer and art historian, Ana Finel Honigman's latest project, Saccharine is one element of a group show at Grimmuseum, as part of Berlin’s D12 exhibition series. Ana’s curatorial muse is the female escort and feminist intellectual "Nadja Veblen" (interviewed on the project’s website), whose rather unglamorous experiences inform Saccharine’s exploration of contemporary intimacy. Dazed spoke to Honigman about working with friends, Nadja’s significant name and her own self-image.

Dazed Digital: In terms of the exhibition's concept, what does Saccharine mean to you?
Ana Finel Honigman: By referring to an artificial sweetener, Saccharine symbolises the form of faux-intimacy that Nadja’s clients need. It is also a potentially toxic and nutritionally empty add-on, which references the risks of Nadja’s job and the clients that become emotionally invested in her. It alludes to a dismissive view of romance, offering a counterpoint to the genuine love embodied in relationships that four of the artists in the show present.

DD: Do you have more affinity with work made by close friends?
Ana Finel Honigman: I hope that I am meritocratic when critiquing work. But conversation can definitely corrupt viewing. I had a boss once who was a real ogre. I got angry and said to him, "Criticism isn’t about who fucked you or dissed you in the 70s." He responded, "It is kiddo, you just haven't been around long enough." I hope that I never will be. But real intellectually invested friendship is something different.

DD: Your muse for the project is "Nadja Veblen", a feminist scholar and female escort. How does she relate to the show?
Ana Finel Honigman: Nadja Veblen’s given name evokes Andre Breton’s surrealist novel about an elusive muse. Her surname refers to the economic theory of “Veblen Goods”(http://en.wikipedia.org/wiki/Veblen_good) - the notion that a luxury commodity’s value increases as a result of its price, as opposed to the principle that the price is a reflection of its inherent, or even perceived value. She selected her name after being sexually rejected by a few close friends. She was already selling her intimate services then but the intimacy she has with these friends was genuine. She was more baffled than hurt that the same thing she that was sincerely offering for free was considered worthless whereas other people were pricing it at three months of her rent. Her name is also an analogy for the seemingly arbitrary attribution of value to art.

DD: According to the Grimmuseum's premise for the show, "Nadja" is supposed to be your curatorial doppelganger. Are you envious of your muse's alter-ego?
Ana Finel Honigman: I am not especially envious of her because her job is actually quite grueling. She has never experienced real danger or unpleasantness. It sounds lovely to be paid to be adored. And "Nadja" is hyper-sexual. She genuinely loves sex and is most comfortable with casual sexual relationships predicated on mutual respect and fondness instead of conventional romance. She genuinely cares about and respects a few of her clients. But the reality of what she does is often a real drag.

DD: Are you conscious of your own image as projected in photographs, projects, bios?
Ana Finel Honigman: I don't think that I am even capable of thinking about that. I am transparent almost to my detriment. I couldn't have a secret life for three seconds. However I appear is just how I am.

DD: You've been photographed alongside the works in the exhibition. Why was that process important to you?
Ana Finel Honigman: Curating can be a critical confession. I wanted to embody the theme of intimacy by presenting myself surrounded by the work from the show, since I love the art and artists involved very dearly. One photo by Maxime Balleteros shows me at my breakfast table beside Zhivago Duncan’s print. Heiko Laschitzki took the other portrait at my best friend David's flat in Berlin, where I stay when someone needs mine. I miss chirping at him if he's gone, so I talk to Jana, the stunning red haired fetish model whose portrait he is painting. She looms over me in Heiko's image: you can’t get more intimate than seeing me with my imaginary friend.

DD: What about Saccharine’s web component? Will it develop further?
Ana Finel Honigman: That’s definitely the plan. I have invited more contributors to participate over time. My interview with Martin Kemp will run first and the rest will be uploaded gradually. It would be wonderful to have it evolve into an online journal about the subject. We're not going to run out of interesting things to say about intimacy...