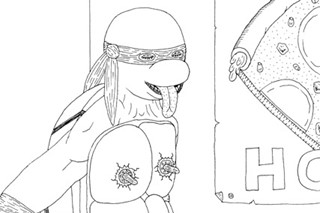 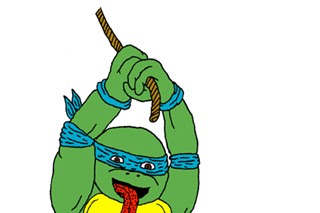 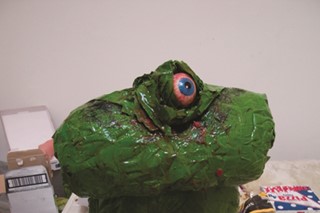 London based artist James Unsworth is renowned for his typically grotesque venereal scenarios, repeatedly compared to Bosch, his meticulously depicted content invariably involves turds to prehensile nipples and back again for some more. In his first solo show at Five Hundred Dollars Gallery, he showcases his vast new body of work which consists of 60 new drawings, ceramic works, photographs, wall paintings, films and a publication. The exhibition even features a one off gift shop that Unsworth claims “stocks a range of cheaply made commercially unviable 'art objects' that meet a range of budgets. I thought I would give the public a chance to buy the best t-shirt in the world instead of wearing a t-shirt that says 'Colorado 56' or something like that. The mugs and stickers seemed like suitable items for a museum gift shop. I couldn't source any bendy rubber pens or thimbles.” In keeping with his forte, the exhibition sees the turtles engaging in all manner of sex acts, exhibiting Unsworth's talent across a range of media from delicate lines to garish lo-res graphics and amateur set design, all of which simultaneously challenge childhood memories and tantalize necrophilic taste buds.

“I used to love the ninja turtles but the idea for the show came when I was looking at putting incongruous things together, I thought the most unlikely combination of things would be ninja turtles and sex but I was amazed to find that ninja turtle slash fiction and erotica exists. In a way the show is a celebration of variety but its mostly drawings of ninja turtles fucking dead people.” Instead of maintaining the peace and harmony under the instructions of an anthropomorphic rat, Leo, Donny, Raph and Mikey copulate with corpses and indulge in pills, pizza and pornography. On that tediously passé subject of taboo, he notes, “I guess anything goes at this point in time where we are. There's still the law and inherent moral compasses but the idea of what is taboo is rightfully being stretched. Shame is disappearing to be replaced by I'm not sure what.” They’re not sure it’s even legal, and neither are we. No under 18s allowed.