The cult photographer is back with OXYcoNEXI, a new exhibition that shines a unique light on the 'toxic' causes of societal breakdown 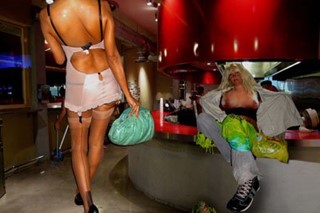 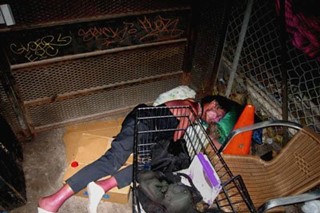 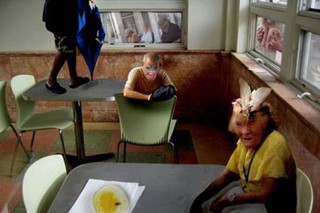 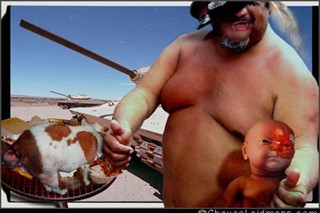 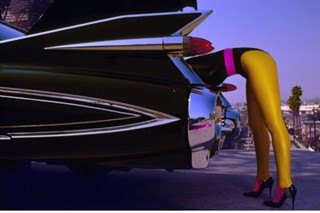 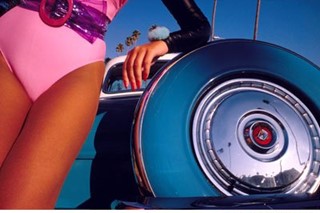 During the 80s Cheyco Leidmann’s images established a new visual style. Back then the hyper-real colours of his American landscapes, neon signs, swimming pools, secluded beaches and more, sparked the imagination of many art, music and photography fans. At the time Leidmann worked mainly on fashion and beauty editorials and advertising campaigns, publishing his works in books such as the cult classic Foxy Lady. In more recent years, the photographer carried out a sort of social analysis through explicit and disturbing images that show the “toxicity” of modern life. Accompanied by his creative collaborator Ypsitylla von Nazareth, who contributed with her styling to quite a few advertising campaigns shot by Leidmann, the photographer is back with an exhibition part of Paris’ Festival de L’Art Saint Germain des Prés. Entitled ‘OXYcoNEXI’ the exhibition will feature surreal landscapes populated by grotesque characters. Disquieting and disturbing, these images can be viewed as strong statements about the society we are living in.

Dazed Digital: Where does the title of the exhibition, OXYcoNEXI, come from?Cheyco Leidmann: It’s an acronym formed by taking three components from the monographs “Foxy Lady”, “Silicon” and “Sex Is Blue”. The 19 images featured are a direct result of this trilogy and are shown for the first time in Paris. Last November the Brescia-based Wave Gallery in occasion of the Notte Bianca dell’Arte event featured 84 images from this set.

DD: What’s the secret behind the perfect shot?Cheyco Leidmann: Eyes are the weapon. Think subversive. It is all about speed, experience, discipline, reaction, knowledge, precision and luck bundled together at the right moment of nihilistic silence. When that happens chances are that you’ll shoot a 90 per cent arresting shot.
DD: Looking back at the brightly-coloured images you produced in the 80s, how do you feel about them?Cheyco Leidmann: I guess each frame has its own pacing, rules, emotions and culture reflecting the period of time you are living in. At the time, I rocked the world of photography and if I had regrets about those shots they wouldn’t be worth mentioning. Times have changed and I see things from another perspective today, conceiving my work in continuous evolution.

DD: Some of the images collected in the volume Toxytt are very powerful and in some cases disturbing, were you ever subjected to any restrictions while working on them?Cheyco Leidmann: The Toxytt images offer an uncompromising look at society. The book publisher and I had the pleasure to work without any restrictions on the book. But censorship still occurs: in Switzerland a distributor censored an issue of a magazine that featured some of my works since they apparently contravened Article 197 of the Swiss Penal Code that states that material considered pornographic in character is illegal.

DD: Do you feel that some of the most powerful images you recently shot could be read as commentaries upon society?Cheyco Leidmann: Absolutely. Toxytt for example may not be a documentary or reportage project but the haunting images featured in it speak for themselves and sometimes hit you in the stomach. Though I guess that, rather than interpreting them as commentaries, we should maybe see them as strong statements about contemporary issues –about the insanity running wild in our world that pushes many people in our society to commit criminal acts because they feel trapped into grinding poverty and desperation.

DD: Of all the cities you visited, which is in your opinion the most “toxic” one?Cheyco Leidmann: Each city, town or village has its own “toxicity”. Yet the most dramatic places are those where the streets never sleep.

DD: What kind of exhibitions do you like visiting and which artists or photographers inspire you? Cheyco Leidmann: I visit exhibitions that feature artists who have something strong to say. I will definitely see the thematic exhibition elles@centrepompidou in Paris. I usually prefer to focus on my own vision and inspire other people with thought-provoking images rather than be inspired by others. I’m always pleased to hear my work helped other creative people, such as Duran Duran’s bassist and guitarist John Taylor who claimed my creative, playful and surreal images were the starting point for their videos, or fashion designer Véronique Leroy who stated my photographs and style inspired her collections.
DD: Where are you based at the moment and where would you like to live if you could move anywhere in the world?Cheyco Leidmann: I consider myself as a restless cosmopolitan artist so I have the freedom to move anytime and anywhere if I want. I live where I like to live, in ‘Toxyttcity’!