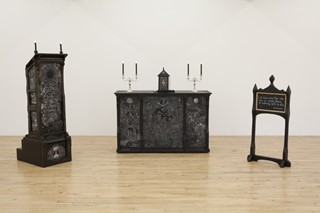 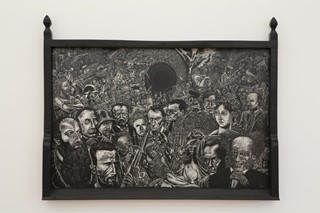 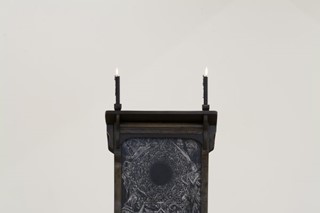 Last month, the gallery at 20 Hoxton Square Projects saw visitors enter an eerie chapel installation to experience mysterious cult-like ceremonies. Entitled 'The Church', the installation has witnessed erratic performances by the performance artist JMF Casey, involving sermons and musical collaborations with Emile Bojasen. Playing with the aesthetics of religious ideals and rituals, they attempt to deal with the philosophical issues of faith in modern culture. Utilising an "engaging and poetic approach to existential problems" today, Casey has been able to direct his interests in the morbid and the melancholic to his performance art.
Dazed Digital: What reactions were you aiming for with your work?John Casey: Positive.

DD: What inspired you to do it?John Casey: There is no one thing, but rather an accumulation of ideas from several miserable years of research and incidents, in particular a page falling out of my copy of 'Thus Spake Zarathustra' (a chapter called "Of The Preacher Of Death", on which I based the lectern); discovering the philosophy of E M Cioran who has since become the main philosopher from whom I steal ideas; conversations with my friend and collaborator Emile; and a long obsession with the poem 'The Wanderings Of Usheen' by Yeats.
DD: Was there an element of humour? Or was this all as dark as it seems?John Casey: I hope people would find lots of humour in it, if you look carefully at the images you will see plenty of monsters fucking and scenes of comic violence. All that detail can get pretty boring so I like to cheer myself up – a humourless religion is a terrible thing.

DD: Did you think people would be offended by your exhibition?John Casey: Possibly, and I wouldn't be surprised, but I wouldn't be particularly proud of it. I would hope that the content contains a valid message that justifies any offense it may cause. I don't believe it to be particularly extreme. Although I am of no orthodox belief, I have a lot of respect for the idea of religion (though in specific cases I have reservations about the actual practice). I think any open-minded person, religious or otherwise, should be able to stomach it...

DD: What does religious belief mean to you?John Casey: Lots! Unsolvable mysteries, unanswerable questions, the creative urge, delirium of the senses, the will to life, the uncertainty of the beyond...
DD: What's next?John Casey: Rest, reflect and plot.

You need to have the Macromedia Flash plugin installed to be able to play this video.