On the heels of her recent show, artist Alba Hodsoll and curator Antonia Marsh go head-to-head on how they’re finding new ways to discuss sex through their work

Last month, artist Alba Hodsoll’s exhibition POV – created in collaboration with friend and curator Antonia Marsh at London’s Cob Gallery – opened up a dialogue around how we perceive sex through art.

The multi-dimensional show was made-up of four-parts: a life-drawing session, a film by Hector Aponysus documenting these immersive classes (premiered above) and a feminist pornography panel – all held in formation by Hodsoll’s art installation. Putting herself at the epicentre of each practice, including the participation of her first ever naked, life-drawing class, Hodsoll told us, “The body, sex and pornography for me, is a study of how two bodies, or sometimes three, go together. How they interact. How they exchange, without judgement.”

Through the use hyper-sexual reference points; large-scale canvases featuring full penetration, tight PoV crops and a show name – PoV – that takes its jump from an acronym describing a genre of pornography where sexual acts are filmed and watched from the point of view of one partner, the artist attempted to deconstruct how we perceive pornography. “Sometimes pornography feels so quick,” Hodsoll says of why she started this project. “Sex with people can be so quick too. Sometimes you can’t think. Sometimes you can’t claim the moment and you can’t always be wholly present.” Grounding this thought in context, Hodsoll continues: “Through close crops and detail, I wanted to show sex some consideration. It was never about fetishism, always appreciation.”

Below, Hodsoll goes head-to-head with Marsh to discuss working together and the importance of giving pornography some more thought and appreciation.

“I wanted to show sex some consideration. It was never about fetishism, always appreciation” – Alba Hodsoll

Antonia Marsh: The exhibition space (the Cobb Gallery) became your home, how did that make you feel?

Alba Hodsoll: That’s so true. I didn’t want to make the work in an isolated manner and then one day hang it up on the walls, so I made as much work as I could in the exhibition space. It was all very much conceived in one space, which added to the feeling of intimacy. We had red lights illuminating the space, we hoped to create a hum of vibrating red moving from ceiling to floor in gradients, without ever making the set feel clinical or cliché.

Alba Hodsoll: Would you feel weird returning to the same space now?

Antonia Marsh: I feel like I’m never going to go back there! You made those four massive diptychs in there, you were in the space until midnight every single night – it even smelt of you down there!

Antonia Marsh: Your parents were the first people started to enter the space, how did that feel?

It was impossible to ignore that I had an anxiety about showcasing this type of work, an anxiety that extended beyond just my parents. I felt so anxious even in those initial conceptual discussions. I remember writing the press release and their was this one sentence I could not articulate. You helped me find articulation and were so critical in those discussions. Antonia has a totally unique way of talking and communicating. A way that feels familiar and through which I at times find translation.

Alba Hodsoll: The way we talk about sex sometimes differs though?

Antonia Marsh: Yes, you are very open when it comes to talking about sex, but on a personal level. PoV was the first time you talked about it so overtly in your work. Understandably, I felt you were conscious of being pigeon-holed, you didn’t ever want to be perceived as some kind of sex show.

I guess, I’m more used to addressing sexual themes through my work. However, just because you make work about sex does not make you some kind of nymphomaniac. I am open about sex with a critical distance, but when it comes to talking about my personal sex life, well that’s totally different. Guess we are opposite then, in that respect. 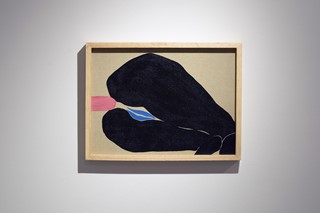 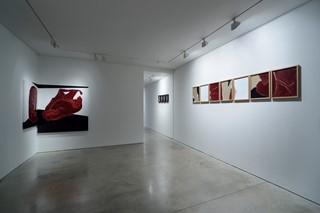 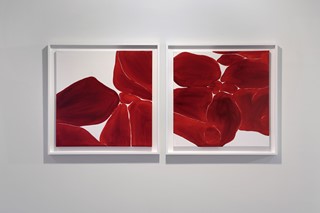 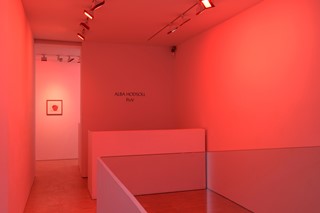 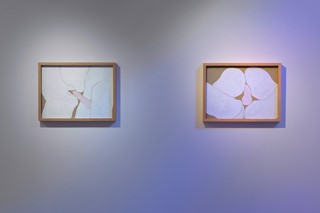 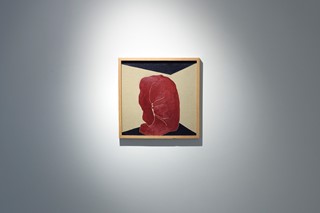 Antonia Marsh: Did the show answer any of the questions you had about sexual attachment and detachment?

Alba Hodsoll: It felt like the beginning of a more complicated question actually. The show made me question what I should make next and how to approach that next body of work.

When it comes to pornography I go back and forth, with a lot of mixed feelings and inner conflict. I can’t pretend that because of the panel discussion or because of this show, that I have reached some kind of conclusion – because, I haven’t. If anything it has further confirmed my feelings: that there is more to be revealed, nothing is definitive.

Antonia Marsh: I agree. The conversation has just started for me too. These themes are never finite, they are strands you pick up on again and again to open more conversation. I think just by being a woman and a feminist and alive, it's only natural that sex will be a source of inspiration for the rest of my work.

Antonia Marsh: You were so nervous ahead of the panel discussion, how did that compare to the way you felt during the life-drawing session?

Alba Hodsoll: I had never ever had a life-drawing experience, this was my first. The whole thing was so fun. Actually, it was a relief. Art can get so heavy, it can be exhausting – or at least it is that way for me, the process plays in my head and I listen to it all day. So, it was really nice to feel relief.

I was nervous. It’s a loose way to spend a Sunday. All my work was on the wall. I felt embarrassed. I was worried about drawing the body, but those worries very quickly evaporated the moment I sat down.

Antonia Marsh: There was music and spoken word all framed by your work. I found myself questioning what I was doing, whilst I was doing it. Everyone was welcome. The life-drawing sessions and subsequent film are about so much more than the models and artists, it was all so interactive. Abby Wilson was cracking open a can of Stella, she just stripped off and stood there with a Sainsbury’s bag in her hand.

Alba Hodsoll: How would you describe my interpretation of the body?

Antonia Marsh: It’s amorphous. Everything becomes one entity. With those bigger canvases you painted, especially the very last one, you can’t tell whether there are two figures, or three, or one. I almost feel like your interpretation of the body is quite non-committal. You are reclaiming the nude form and the sexual body of the human and that message is always there, you just have to look for it.

Alba Hodsoll: You are right. The body, sex, and pornography for me, is a study of how two bodies, or sometimes three, go together. How they interact. How they exchange.

Antonia Marsh: Do you think this interpretation differs to Life Lines (Hodsoll’s 2016 show)?

Alba Hodsoll: Yes. I almost went in the completely opposite direction. In Life Lines I was looking at organic shapes or landscapes and the solitary figure. With PoV I removed the background and allowed the body to take more space. I zoomed in on some PoV pornography and used oil paint and linen to fabricate specific moments. I can’t ignore this process. I wasn’t trying to fetishise this focused elements, instead I was giving them the consideration they deserve. Pornography seems so quick, sometimes sex with people can be so quick. Sometimes you can’t think, you can’t claim the moment and you can’t be wholly present. I wanted to give it attention.

So many of these shots were of full penetration, had I coloured or contoured shapes, people would of had a different response. They would've left the gallery thinking – ‘oh, just another image of pornography then!’ Instead I gave close crops concentration ambiguously. This feeling of ambiguity was so important to me, because unlike sex, I didn’t want people getting there too quickly.