NYC’s The Skate Kitchen have grown from a group of friends to a skateboarding phenomenon, picking up fans from the fashion world to Pharrell Williams 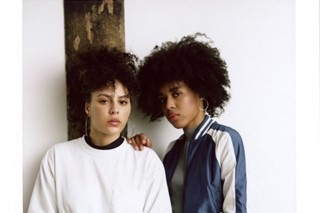 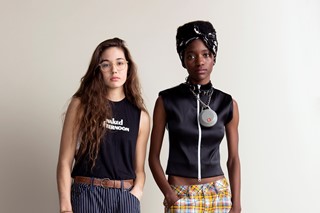 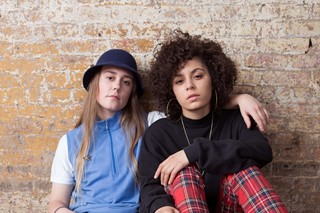 For her contribution to Miu Miu’s “Women’s Tales” series, Crystal Moselle – the director behind acclaimed Sundance documentary The Wolfpack – put together a dreamy, semi-biographical short titled That One Day, featuring a group of young, female skaters collectively known as The Skate Kitchen hanging out in NYC.

Six months and over 20,000 followers on Instagram later, The Skate Kitchen now find themselves christened by Vogue as “New York’s coolest,” while the New York Times candidly refers to them as “Fashion’s Favourite Girl Skateboarders.” What began as a few mutual friends brought together for Moselle’s film has grown into an all-encompassing, mixed gender skateboarding family, boasting fans and followers all over the world.

One of these fans – a certain Pharrell Williams – personally selected the collective as agenda setters in the creative industry as part of his collaboration with G-Star RAW for the Elwood X25 prints. “They’re opinionated, unique, introspective, multi-talented young women that like to speak their minds,” Pharrell says of the crew, “And they’re obsessed with anything that has a banana on it.”

To mark their involvement as one of five talents curated by the hip hop icon, we spoke with The Skate Kitchen about role models, recognition, and how social media is helping young, female skaters to get out there and do it.

So, what’s a typical day for The Skate Kitchen?

Brenn Lorenzo: A typical day for The Skate Kitchen is going out on a good day when mostly everyone is free – chilling, skating, and learning new tricks.

Rachelle Vinberg: Usually we’ll all meet up at a skate park – LES, Chelsea and Cooper (skate parks in NYC) are a few of the ones we go to. If it’s a nice day, we are quick to take advantage of it, so we’ll spend a good chunk of time focusing on skating. There are times where we are all doing our own thing, skating different sections of the park, and there are times where we all skate one obstacle together, motivating each other and backing each other up. Throughout the session there are periods of time where we’ll just hang out, spending time talking, cracking jokes, making deli runs, and contemplating the next move, which is usually skating some street. After a park session, we’ll hit up some street spots and film some clips.

In a practice that tends to be male-dominated, do you feel that it’s important for young girls to have people such as yourselves to look up to?

Rachelle Vinberg: For young girls, and even boys, to see a group of girls having fun on a skateboard, and hanging out with the guys while doing so, is important. It lets them know that it’s okay for girls to skateboard. When I first started skating I never saw any other girl skaters at parks, and rarely saw any gaining recognition on social media. There were times where I questioned my belonging to the skate community because of it. I hope The Skate Kitchen serves as an affirmation for people who aren’t sure if they can join the skate scene for whatever reason. One thing I can’t emphasise enough, though, is that we don’t exclusively skate with girls. Boys are very much a part of The Skate Kitchen. Variation is the beauty of it.

Ardelia Lovelace: What I love about our group is that there is a mixture of races. Hispanic, white, black. And we want other girls to know they’re not alone and they deserve the confidence to skate just as much as anyone else.

Nina Moran: It’s really cool because the majority of our group are women of colour – that goes against the norm – and stupid gender roles.

Kabrina Adams: It’s important for anyone to have someone to look up to, because when starting out in anything it can be scary. Knowing that others went through the same experiences as you can help and motivate to keep on going.

“For young girls, and even boys, to see a group of girls having fun on a skateboard, and hanging out with the guys while doing so, is important” – Rachelle Vinberg, The Skate Kitchen

How important is the role of social media and the internet in enabling and empowering young, female skaters?

Jules Lorenzo: Since social media is a widespread platform that allows people to connect from all over the world, it’s an extremely important factor in inspiring young girls to get out and skate. It enables them to see the other girls out there going through the same struggles and fears as they do upon entering the skating world, as well as the rewards and support you get by sticking to it.

Brenn Lorenzo: In NYC, you get the real raw and gritty street skating that has mass appeal over here in New York. Everything down to the style of an East Coast skater deserves to have light shed on it. There’s nothing like it and it’s honestly such a dope environment.

Kabrina Adams: With the way things are going with social media, I’m sure East Coast skating is getting more and more shine. If you’re into skate culture, you’ll know what’s up.

Crystal Moselle sought you out for her contribution to the Women’s Tales series, Pharrell identified you as agenda-setters for this collection – how does it feel getting recognition for what you do from different creative circles?

Rachelle Vinberg: It feels great to be recognised for doing something that we genuinely enjoy. We aren’t being something we’re not, nor are we being asked to be, and it’s both shocking and honouring to think that people find what we are doing interesting because to us, it’s just what we do.

Jules Lorenzo: It’s amazing and a little surreal at times. Like sometimes you have to take a step back and realise ‘Hey, this is really happening!’ I can only hope that good things keep coming because the future looks bright.

“It's important for anyone to have someone to look up to, because when starting out in anything it can be scary” – Kabrina Adams, The Skate Kitchen

In regards to the Elwood X25 prints, why did you go with the pant print you selected – why do you identify with it?

Kabrina Adams: Most of the colours I like to wear are either bright, multi-coloured or both. The print I chose went along with that. I identify with it because it goes with how I choose to externally express myself to the world.

Rachelle Vinberg: I’ve always admired the 60s – especially the music and fashion. The striped pants reminded me of what was worn in that time period.

Jules Lorenzo: To be completely honest, I chose these pants because of Linkin Park. In their ‘Papercut’ music video, Chester Bennington was wearing these plaid pants that I loved! I could never find something close to them until I saw these and I knew that I had to have them.

Is there a friendly rivalry within The Skate Kitchen?​

Rachelle Vinberg: The cool thing about skateboarding is that everyone has their own style of skating. It’s not really a sport that involves competition – although there are professional competitions. We do it for fun, so I would say there isn’t.

Kabrina Adams: I’m cool with everyone. No rivalry here, not even a friendly one.

What do you have planned next?

Rachelle Vinberg: We’re working on a feature film with director Crystal Moselle. It’s more of a coming-of-age and friendship type story, but it’s gonna incorporate many aspects of the skate culture in NYC. We are all really excited for it because there's gonna be an authenticity to it. We pretty much play ourselves in a more dramatised lens.

Ardelia Lovelace: And a skate zine coming soon. Other than that, we’ll just either be in school or at the skate park.