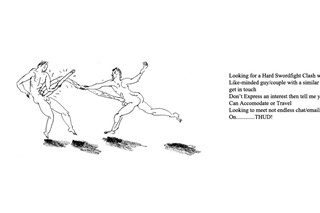 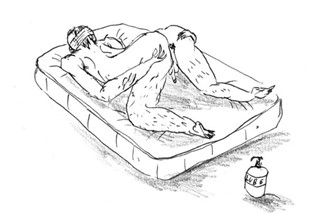 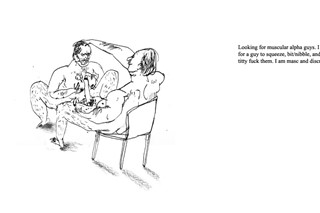 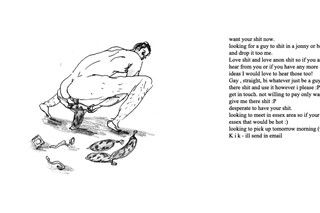 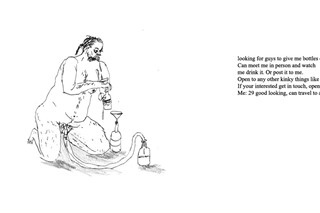 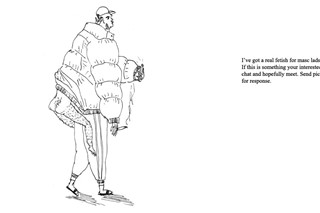 The internet can be a weird and wonderful place – just ask Dominic Myatt.

The London artist was a frequent user of Craigslist – he sold a lot of socks, apparently – when he stumbled upon the ‘men seeking men’ section of the London website, an online community in which male users can post to arrange dates and casual sexual encounters, with the latter ranging from the most conventional to the outright peculiar.

The book shines a light on sexual conversations often left out of the mainstream dialogue. Ahead of its release, we spoke to Dominic about why the internet is the perfect place for the deepest, innermost fantasies to come to life.

Why did you decide to focus solely on ‘men seeking men’ ads?

Dominic Myatt: I didn’t think it felt right, as a man – even as a gay man – to interpret through a male gaze adverts posted by or involving women. I didn’t think there was anything I could add to that conversation, being a male drawing humour from a female ad, or drawing with a female body. I thought it was a lot more interesting to be able to pick apart the element of shame that’s attached to queer bodies.

“The strangest one is a guy who was looking for a farmer to ‘own him’. He wanted to be kept as livestock and used as a pig would be. He said his meat would be tasty” – Dominic Myatt

Did you get an opportunity to speak to any of the guys?

Dominic Myatt: No. I think that could be a whole different story. I think I’d feel strange being involved in that way if I wasn’t happy to partake in these scenarios, or even get pleasure, in a way – I feel like I’d be using them if I were to actually take up their time. I think that the anonymity I retained of them and myself allowed me to imagine the scenarios that had happened, or might not happen.

One of the main themes of the book is the idea of blurring lines, between private and public, pleasure and revulsion. Is that something you’ve always been interested in as an artist?

Dominic Myatt: It’s run through my work since my final year of university – this line between revulsion and pleasure, and too much pleasure and ecstasy turning into something that was unbearable and overwhelming. Jacques Lacan had this idea of jouissance – pleasure becoming so intense that it breaks part of the self. It’s always been in my work.

There’s a recurrent contrast between power and submissiveness, too. Why?

Dominic Myatt: I think a lot of the ads mix up the two things in each one. Power people want power over their own submissiveness, I think it’s a reaction to the lives they live. I imagine a lot of people – and some outright say it – are married, and, in inverted commas, ‘straight’. I think they need strict rules in their own rule-breaking, it’s about strong restrictions.

What are some of your favourite examples of the ads you’ve used in the book?

Dominic Myatt: The strangest one is a guy who was looking for a farmer to ‘own him’. He wanted to be kept as livestock and used as a pig would be. He said his meat would be tasty. He didn’t explicitly say that he was into being cannibalised, or anything like that – but it kind of led towards him wanting to be eaten. It wasn’t the main part of the thing, it was just like an end point of him having role-played as livestock for a farmer – he could also be eaten, too. Another interesting one was a ‘foreskin comparing party’. It was a bunch of guys getting together – ‘straight guys’ – that just wanted to compare each other’s intact members in a hotel room. Obviously, I’d imagine it was a slight ruse, rather than just comparing their intact members, using it someway as a facade for sex, as if having the thought ‘oh we could just compare out penises’ isn’t homoerotic in itself.

Most of the ads are littered with typos. Do you think there’s a particular reason for that?

Dominic Myatt: I think there’s almost an element of desperation and urgency, typing out these adverts as quickly as they can because they’re really impassioned in that moment and looking for someone that night, or that hour. I think it just shows also a lack of caring of what someone might think about them. It’s a kind of ‘I don’t care what you think, it’s just about this fetish’.

How important is the internet in enabling the escapist nature of the described scenarios?

Dominic Myatt: People can live out fantasies. I think a lot of the time they aren’t living out these fantasies – it’s just the idea of just putting it out online. A lot of these people probably never found anyone to respond or complete a scenario with. I think it’s just this outlet for the desires. With the internet – and especially Craigslist – the anonymity of it really helps.

Is this commitment to escapism something that should be celebrated?

Dominic Myatt: I feel that it’s cool to be more open about these things in a way. It’s not like putting shame onto these guys – it’s the opposite. I want to break shame apart from these adverts. I think it’s more important for us all to be more open about our sexual desires and needs – as long as they’re not involving hurting someone else, or being eaten as a pig would be.

(no kissing) is available now. Click here to find out where