We speak to Marianne Eloise about the initial embarrassment of embracing her old entries, discovering emo for the second time and the glory days of Myspace 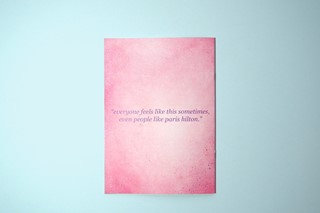 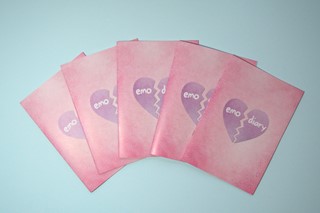 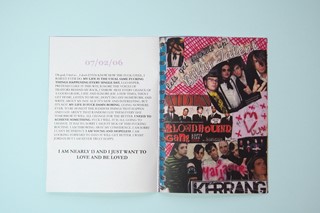 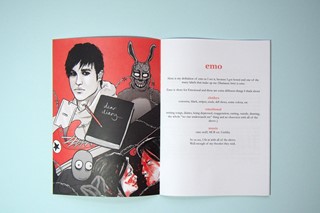 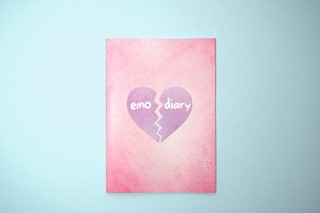 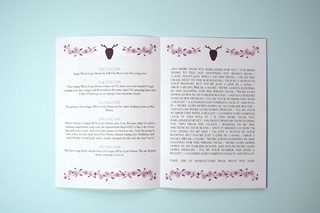 “Later on at home i ask him out again. i drank vodka for courage and asked him on msn. i regret breaking up with him at all” reads a diary entry on Twitter, first written on paper ten years ago. Recognize the deeply emotional brand of teenage torment? These diaries could have been penned by any of us as anguished, anxious teens, and that’s exactly the point. Carefully walking the line between highly personal but extremely relatable, Emo Diary 05 is a Twitter account cataloguing excerpts of Marianne Eloise’s thoughts and feelings, emitted from deep within the UK emo scene when she was between the ages of 12 and 14.

It started out as a nostalgia ride between friends but has since transcended formats, moving from from 140-characters online to a 24-page physical zine. Emo Diary 05 captures the zeitgeist of the infamous early 2000s subculture through drawings of Pete Wentz, song lyrics and scans of collages made with pictures taken out of the pages of Kerrang, all tied together with the angst and awkwardness only a teenager knows how to convey.

We caught up with Marianne, now a 23-year-old writer and proud current-day emo enthusiast, to talk about the glory days of Myspace and the initial embarrassment of going through her old diaries.

So, how was the journey of going back to your diaries and looking back at your teenage self?

Marianne Eloise: To be honest, I couldn’t even look at the diaries until 2011. I was so embarrassed of old pictures and of having been so into it. But one night when I was eighteen I went out with friends to a club in my city and found myself really enjoying the music again – I didn’t know why I had ever denied myself the pleasure of screaming along to My Chemical Romance.

When I did end up reading the diaries a couple of years ago, I thought they were really funny. I read them out to my boyfriend and sent snippets to friends who were mentioned. They loved it so I wanted to make them more available for us all to enjoy. They really captured a moment I was embarrassed about, and still am sometimes. Especially the melodramatic bits. But it’s all for the greater good of sharing experiences, so it’s fine.

Do you feel like the version of you found in the diaries still relates back to who you are today?

Marianne Eloise: I know a lot of people say they can’t recognise themselves as teenagers, but I feel I have more in common with myself when I was thirteen or fourteen than I did when I was eighteen. I see more of me in that person. I’m still the same but there’s so much in my life that wouldn’t have happened if I hadn’t been emo. I wouldn’t be talking to you, I wouldn’t have gone to the gigs I did, I wouldn’t write about the stuff I do. I would’ve probably found something else, but emo felt like somewhere I belonged.

I also think being in that scene made a big difference in my maturity. At 13 or 14 I was going to gigs full of men, in different cities, where I was getting punched and groped. That was quite a hard place to be in as a thirteen-year-old girl. I had to get tough quickly. I’m also bisexual, and although being thirteen and knowing I was bisexual was hard, being in an accepting scene where all the girls were kissing girls and boys were kissing boys and the singers would sing about it, was really cool, even if a lot of them were doing it for “attention”. It was nice to feel accepted when it any other scene it would be weird. I remember that no singers would say “oh I’m straight” when asked. They just kept it open.

31/07/07 up early and angry, so watch donnie darko with owain then go meet aidan

How do you still have so much material?

Marianne Eloise: I’ve always been really obsessive from a really young age, so I kept everything. Every picture, every setlist I ever caught, all my pictures are backed 400 times. Obviously there’s stuff I threw away or was too embarrassed to keep, but I’ve kept more than I think a lot people have. I think I’ll probably end up making a second one because I have so much stuff. I have books from 2004 all the way to now, and I still have so many tickets and MySpace content that I haven’t explored. They can hit me up for the emo archives.

When you were curating the zine and going through loads of diary entries, how did you filter through what to put in, what to leave out?

Marianne Eloise: I wanted the entries to be funny, but also to sum up a moment as much as they could. I didn’t want it to get legitimately sad. There are maybe one or two entries that are a bit sadder inside the zine because I think that’s important, but not all of them have to be like that.

Also, it features a lot of my friends – they are really cool with everything being out there, but I wanted to be faithful to them in the creation of the zine and keep some stuff out. It’s not just my story. The thought process was basically: “What’s funny and captures the zeitgeist, without hurting anyone?”

Why did you choose Twitter to start cataloguing the diary entries?

Marianne Eloise: I think Twitter brings out the comedic aspect of it, as you are able to update short snippets out of context and it’s accessible. It also makes it easier for people to engage with it and find the quotes relatable. If I had published them on a blog, I don’t think it’d get that level of engagement, and I wanted people to relate to it.

I mean – nothing will ever be MySpace, but Twitter feels more like MySpace than anything has since. The way that everyone’s quite honest and they speak to each other – you make more friends on Twitter than anywhere on the internet. What was brilliant about MySpace was all the customisation, the massive bios and being able to make someone listen to whatever music you wanted as soon as they got to your page. And the top 8. It’s such an aggressive and competitive thing, such a horrible thing to have as a teenager – you saw you were knocked out of someone’s top 8 and it broke your heart, but I still miss it.

How have the reactions to the tweets been?

Marianne Eloise: When I started posting, I was mainly getting reactions from my friends who were really enjoying seeing memories that had included them. But I think what’s really interesting is the kids who are fifteen now, who were obviously not around during the first round of emo, and are now retweeting stuff that I said with a lot of sincerity in their hearts. I find that really weird. Of course that to me it’s not a complete joke – there is a degree of sincerity – but there’s also a jokey complicity between the 25-year-olds of today who are looking back at it.

It just shows how emo is conducive to adolescence.

Marianne Eloise: Yes! There are comments in Fall Out Boy Youtube videos that say “I was born in the wrong generation!” and I’m just here, having a moment.

A lot of the bands that really represented the emo scene were American, so how did it feel like being a British teenager and being into it?

Marianne Eloise: It really helped that I grew up in a really shitty village in the Midlands. There was nothing to do, and I think that kind of small-town American mentality carried over into that – the “I’m so fucking bored, I want to get out of this place” feeling. We didn’t have the preps chilling in the lockers and stuff, but that was replaced by our own school hierarchies, like the people who’d call us ‘dirty greebs’ and stuff. I think it’s pretty universal to be bored and to also be different.

Emo had a really unique “I’m figuring out how the internet works” aesthetic, so how did you go about translating that to the zine?

Marianne Eloise: It was really hard because I obviously wanted the zine to look nice, but the emo visual isn’t that nice –  it’s kind of ugly and trashy. My boyfriend is an illustrator, so I worked with him on the visual side of it. My instruction was kind of “make it nice to look at, but keep the myspace background aesthetic”. It could never be all nice because that wouldn’t be true to what emo was.

12/11/05 i really hope rose and jack get better in the head. ive felt depressed and suicideish before so i know how it feels.

Who were the emo kids? Who was drawn to it in the first place?

Marianne Eloise: I found that even later in life the friends I make and the people I gravitate towards had a huge emo phase. I don’t know why – I think a lot of them were kind of nerds, they’d been bullied a lot, so they had that kind of ‘us against them’ mentality already. I also think it maybe takes a certain amount of nerdiness to get as obsessed with a band as we were, to dress like them and to look into them and spend your weekends talking about them in forums. There’s also a community aspect to “finding people who understand you”. Also, obviously, kids who were sad.

Emo was one of the most mocked subcultures. Why do you think that is?

Marianne Eloise: I think guys were bashed a lot more because they were gender-nonconforming in a lot of ways. They kissed boys, wore skinny jeans and eyeliner and all that. Also because it’s kind of silly and melodramatic, that’s why people thought it was funny. If you see a gang of punks in the street you’re less inclined to start bashing them – emos were an easy target. If I was in a group of 20 emos out in town, no-one was scared of us. People would come to where the emos hang out to start shit, specifically. That was a regular Saturday afternoon.

11/04/07 got off with jordan at the skatepark in front of ex meg, psycho meg, and that one who fancies him

Is there going to be an emo revival do you think?

Marianne Eloise: I think it’s already happening in some ways. Bands are doing reunion tours or final tours and people are getting nostalgic for it – which is evident in Emo Diary and all the emo nights popping up everywhere.

Who is the ultimate Emo Diary 05 icon?

Marianne Eloise: My ultimate emo icon was Pete Wentz past 2006.