As junior doctors strike in protest at Jeremy Hunt’s imposition of a new contract, “Picket the Profiteers” protests kicked off across the country. They were attended by the typical anarchist rabble: medical professionals, pensioners and people who feel they might potentially need medical treatment at some point in the next fifty years. At an elite private health conference in London, protesters hurled stinkbombs and caught punches from security guards as they tried to batter their way into a conference at the Royal College of Physicians (£1,500 for a two-day ticket).

The conference was more than just a chance for private health bigwigs to hob-nob in opulent surroundings. It explicitly aimed to link up private healthcare operators and investors, with a particular focus on sinking their teeth into emerging markets in the global south.

James Dylan, a student doctor who helped to organize the protest, said: “Our message for private healthcare CEOs is simple: your pursuit of profit is killing people. We will not stand for it any longer. These transnational companies are more than happy to profit from illness while avoiding tax. The NHS is about mutual care and fairness, and we will not allow that to be corrupted.”

While invitees to the conference included head honchos from BUPA, General Electric Healthcare and management consultancy firms such as McKinsey, the protesters who attempted to shut down the £1,500-a-ticket shindig were a catholic representation of London’s left-wing street movements. Student Jazz Adamson said: “I’m here to protest the piece-by-piece sell-off of the NHS to private companies that are more interested in profit than providing healthcare services. We need to fight against this as much and as loudly as we can.”

Medical professionals from NHS Uncut organised the protest and injected a degree of bedside manner calm into proceedings as they dished out ammo beforehand. The plan was to burst into the lecture hall, hurling stink bombs and releasing rape alarms tied to helium balloons in order to force an evacuation of the keynote lecture. Cover was provided by a 40-strong gaggle of placard-waving picketers, some of whom joined the surge up to the steps of the Royal College of Physicians. As they hurled themselves against the glass doors of the atrium, protesters chanted: “public health, not private wealth”. 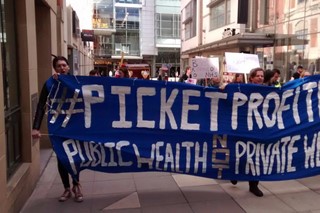 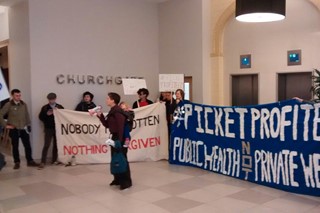 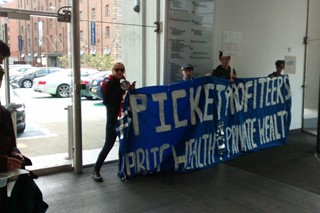 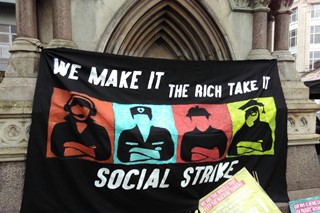 Occasional body-parts were thrust through the doorways and volleys of stink-bombs arced overhead, but the protesters were outnumbered and outmuscled by a heavy security presence. Some of the punches were captured on grainy mobile phone footage, supplied to us by NHS Uncut.

Did the protesters feel dispirited at being forced to tussle with ordinary workers, rather than the medicine tycoons gliding in smoothly through the front entrance? “This is how capital works,” demonstrator Sampson Fuller explained as he dusted himself off after the melee. “It turns working people against one another, even though we should all be on the same side. In a way, it’s the same process as cuts and privatization. Take away NHS funding, turn ordinary people against it, then flog it off to your mates.”

Despite their failure to shut the event down, the protesters were pleased with their morning’s work. Dylan said he wasn’t surprised that the cause is attracting widespread support, adding: “We have no choice but to escalate and go on the offensive, whilst broadening strike action beyond the junior doctors' contract dispute to involve all of society.” Elsewhere in London, demonstrators successfully shut down the offices of private health company Virgin Care, while roving pickets closed stores and occupied offices across Manchester, Leicester and other cities.

Passing cars honked their horns in solidarity, and as the demonstrators hastily retreated to a coffee-shop to debrief and compare bruises a passer-by stopped to shake hands with the trainee doctors. Even the door staff who blocked the protest were not entirely unsympathetic. “Don’t you think I’m on your side?” a burly security guard shouted as he blocked the entrance. “Fucking let us in then,” a diminutive protestor screamed back.