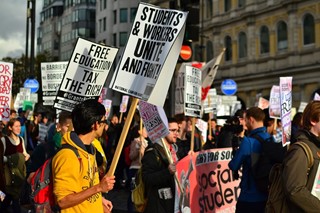 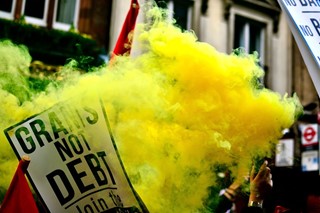 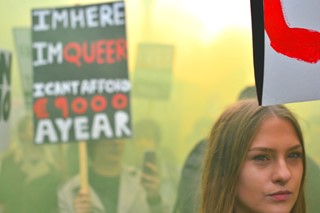 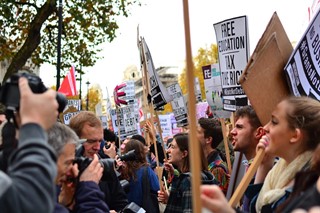 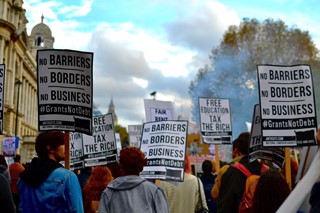 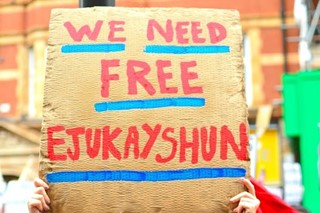 The capital came to a standstill this afternoon, as students from all over the UK descended on the city to demand free education for all. Organised by the National Campaign Against Fees and Cuts and supported by students’ unions across the country, this protest has pulled in thousands of people who’ve had enough of changes to the British education system.

It’s been a pretty tough year for students. With the Tories sweeping to power after the general election, Labour’s promise of reducing fees was no more. It was only a reduction from £9,000 a year to a slightly less unbearable £6,000, but it was something for students present and future to cling on to.

The Disabled Students Allowance, a Government program to support those with disabilities through further and higher education, is still facing substantial cuts, despite the best efforts of campaigners across the UK.

There’s also been widespread dismay at recent plans to cut maintenance grants for students, but the Government doesn’t seem keen to change plans. These grants don’t need to be paid back, and are given to students from the lowest income backgrounds. As protestors continue to march through Westminster, clashing with the police, Dazed went to meet some of those who’ve spent their Wednesday afternoon out in the rain, marching for the cause.

"I’m marching today because the Government is trying to cut student maintenance grants, which was the only way I was able to access education, and it’s true for hundreds of thousands of others too. I don’t think we should let them get away with it. At NUS we’re taking legal action against the Government, but we cant just do that alone, we’ve got to take to the streets and use direct action to stop them in their tracks."

"The current system of tuition fees that we have makes sure that universities like mine, ones that attempt to widen participation, are let down and are failed. Eventually they’ll have to shut down, closing their doors on thousands of students. That’s why I’m here."

"Education is a right, it’s not something individuals should have to pay for, it’s not a commodity. I’m from Malaysia, and as internationals students, when we come here, we want a diverse life experience. But instead we are treated like cash cows, charging us extortionate fees, so we struggle. It makes our lives difficult, and it’s not fair. Education should be free for all of us."

"Education shouldn’t just be for the rich. If you cut funding for students from poorer backgrounds, social inequality is perpetuated. Education gives us opportunities, £9,000 per year takes them away."

"I’m here because cutting grants, and the hike in fees, is a systematic attack on us. We’ve come down from Bristol, and we’ll be back yeah."

"It’s completely unfair to have to pay for degrees. I’m 17. I dropped out of college last year because I don’t see the fucking point in waiting, just to be paying money I’ll never have, just to get a degree that won’t even mean shit anymore. I’d love to go to university, but I need to start making money now. I’m scared I’ll just end up spending years of my life getting into endless debt, and what for?"

“I think education is a right, and it’s important that we use it as a tool for emancipation and equality. Fees and debt don’t lead to that.”

"The cuts to the Disabled Students Allowance are breaking the backbones of disabled students, taking the support form underneath them. People keep forgetting that student fees are still rising, they go up with inflation, just nobody noticed because inflation was low. The poorest people are going to be landed with the most debt as the Government take away grants. It’s like they’re taking away every shred of support for us."