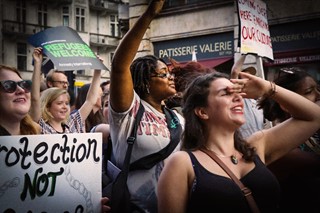 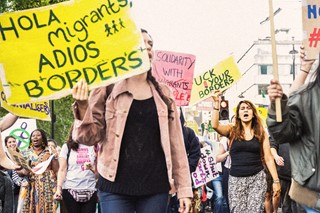 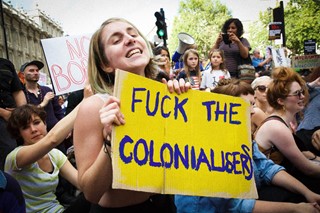 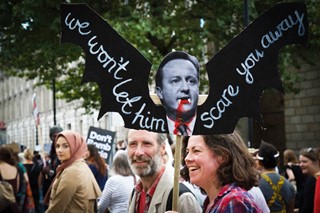 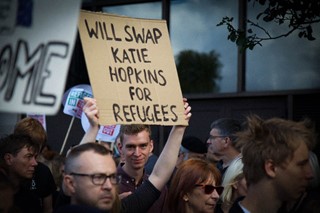 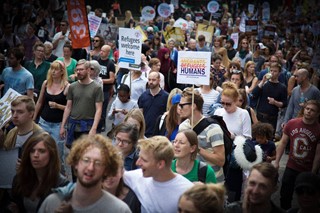 This Saturday, London came alive. Not only did Labour elect a new, radically leftwing leader, but thousands met en masse to march through the city’s streets at the Solidarity For Refugees event. Protesters, singing as they walked, gathered together to demonstrate their dissatisfaction with the British government’s reluctance to support refugees. It was the biggest movement in support of refugees that the United Kingdom had ever seen, brought straight to David Cameron’s doorstep.

Of course, the man himself was not present but that didn’t stop the restless crowd taking to Downing Street, chanting and shouting in a bid to get their message across. According to Shanice McBean, from feminist group Sisters Uncut, "it is positive that there does seem to have been a shift in consciousness but it should not take a picture of a dead child for people to be moved into action. People have been dying on borders for centuries and Britain has benefited from moving capital and business all around the world. We are in protest against that glaring hypocrisy too. People just want to live and survive across these racist borders".

Indeed, a similar concern about British national identity echoed through the crowd. Another protestor, Rosie Cowling, explained that she first realised the full scale of the humanitarian crisis when she was on holiday in Hungary this summer. "It was a very sobering experience", she said, "There were just hundreds and hundreds of people. We met a Syrian literature teacher who shared his poetry with me who had not been able to read an English book since the start of the war – it just made me wonder how life could be so different depending where you were born".

But what next? Skeptics claim that internet era activism is restricted to sharing petitions and complaining in Facebook echo chambers. But, as one of the march’s organisers mentioned, "Facebook is the easiest and most effective way to mobilise people. As a Syrian, and due to the start of the 2011 Syrian revolution, I know how Facebook can give movements the momentum they need. Although, I am still shocked by the tremendous response from the public and I do hope that this will contribute pressure the British government to take their fair share of refugees".

As it stands, Cameron has pledged to take in 20,000 people. While this might seem like an improvement, it doesn’t look great when contrasted to Germany’s 800,000 and, even more shockingly, any of those children could have their "status as refugees" revoked when they turn eighteen.