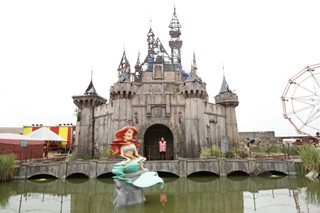 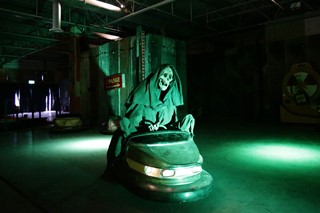 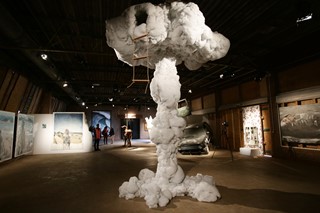 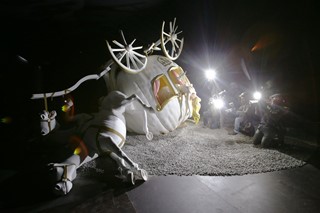 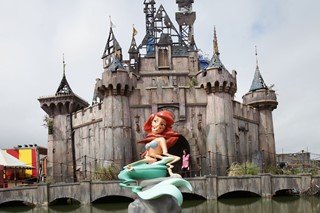 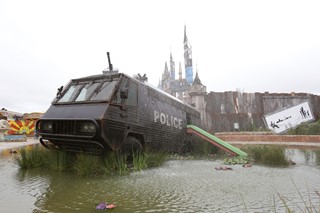 Yesterday art fans and dystopian dreamers alike were granted their first view of Banky’s “Bemusement” park, Dismaland. A dark and satirical take on the so-called ‘happiest place on earth’ – Disneyland. As a reported six million people logged on to (re: crashed) the website in the hopes of securing entry, the first images began leaking from inside the walls of the Weston-super-Mare compound.

Thanks to the magic of social media, images have been flooding the #Dismaland feed, giving fans a glimpse behind the crumbling replica castle where a distorted Ariel the Mermaid welcomes guests, grim reapers ride dodgem cars, Cinderella is a car/carriage crash victim and the world’s most miserable security guards and staff are on-hand to guide the park’s gloom-seekers.

Described as a “family theme park unsuitable for children", Banksy’s decision to take over Somerset’s Tropicana harks back from his own childhood. Telling the Weston Mercury, "I loved the Tropicana as a kid, so getting to throw these doors open again is a real honour." He also revealed that the idea came to him after peering through the fence of the dilapidated site, once a popular tourist spot.

From August 28, acts like Run The Jewels and Savages will take to the stage on Friday nights whereas artists Damien Hirst, Jenny Holzer and Jimmy Cauty will prop up the art side of the entertainment bill.

At just £3 admission price, Banksy could just about break England’s south west coast. It’s not hard to imagine him peeping from the window of a decaying castle as he sends the British public into art overdrive with his first exhibition since the 2009 show, Banksy v Bristol Museum. #cbf’d with all that? We’ve got an inside look for you here.