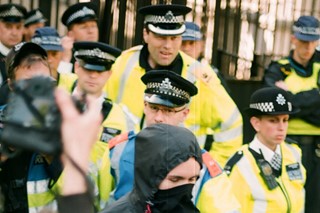 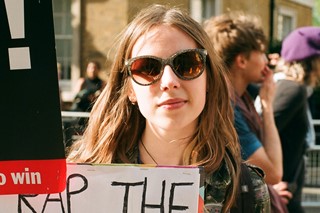 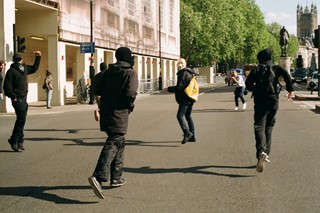 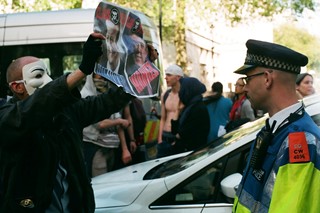 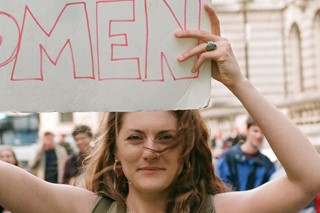 Whatever your political leanings, it's hard to deny that the last five years of coalition rule in the UK has been loaded with discontent. It's easy to see why. The planned privatisation of the NHS. Rising tuition fees. Tax breaks for huge multinational corporations. "Regeneration” that has seen our cultural spaces close and our rent prices soar. A housing crisis that has given way to a homeless crisis. Welfare cuts for the poor and disabled. It feels as if the UK has reached peak awful and we're faced with the reality of a political system that's failing to offer any change.

On Thursday, the UK voted the Conservatives back in for another five years. Thousands of pissed off people immediately organised mass demonstrations against what they perceive to be an anti-democratic voting system and further austerity measures introduced at the expense of the underprivileged. The first of these, organised by London Black Revolutionaries, took place in Westminster on Saturday. We went down to see it play out, and find out what the protesters hoped to achieve.

The first protesters gathered at 3pm outside Tory HQ carrying banners with slogans like, “63% said Not Tory”, “Shame on you” and “David Cameron likes Nickleback” before chanting “Fuck off back to Eton” and getting down to bangers coming out of a boom box.

Despite a heavy police presence the protest started off peacefully, and soon various associated groups such as the Socialist Workers Party and Brick Lane Debates joined the crowd to march to Trafalgar Square and back down to Downing Street. Tourists on open-topped buses looked on in confusion as people in masks rapped to KRS-One and sat in the middle of the road. One taxi driver rolled down his window to shout, “David Cameron’s a nob” to resounding whistles and cheers.

Amy is a part of Digs, a housing campaign group based in Hackney. She told Dazed that she was there to protest against recent social housing policies. “The Tory government have already sold off social housing and now they want to do a massive giveaway of social housing association homes as well,” she said. “The last thing we need is for this problem to be made worse. I think this protest is a first step to show that this government doesn’t represent a lot of people – an alternative is possible.”

Sarah, who told us her mum is on benefits, said: “I don’t want to be on benefits myself, but I can’t afford to go to university with the continually rising tuition fees so the Conservatives aren’t only keeping poor people poor, but they’re taking opportunities away from us as well. How can I get a job without a good degree? And how can I get a degree if I can’t afford it? The cycle is perpetual.”

Although mainstream media tried to downplay the amount of protesters present, by the time it was 5pm, thousands were outside Downing Street as word had spread and passers-by had joined in.

“I’m here to protest against a bunch of radicals who have hijacked our country without the support of the people,” one protestor, Una, told us. “They’re talking about the success of the economy, when the top 10% have managed to pile up their profits by billions of pounds while homelessness has risen by 50% and over a quarter of children in this country are below the poverty line, millions are going to food banks, abused women are being turned away from refuges – that is not growth or benefit for the country, that is benefit for the richest few.”

I asked her what she hoped to achieve with the protest. “I hope that people across the country will wake up and realise that this government doesn’t represent them, the majority of them didn’t vote for them and they should come and fight to get their country back. We’re not the radicals here. I love my city and I want to defend what our generations have died for.”

“David Cameron is the same as Margaret Thatcher, but with a shinier, hammier face.” – Andrew, protester

Andrew, 60, who travelled from Bournemouth to attend the protest, said he was baffled that so many older voters had voted Conservative. “It’s us older folk that are going to need the NHS sooner than everyone else. Why would you vote for a government that has made such huge cuts to the NHS, which means there aren’t enough beds or services for the elderly?”

When asked what he was hoping to achieve with the protest, he said: “It shows we are not complicit. It shows we will make noise and it shows we will not stand back as our society panders to the rightwing idea that you shouldn’t care about anyone else, you should only care about yourself,” before adding: “David Cameron is the same as Margaret Thatcher, but with a shinier, hammier face. And I remember when Thatcher was in power – it really was a dark time for most of us.”

As riot vans began parking up and police began kettling groups of protesters, there were clashes with police which resulted in 15 arrests at the time of writing, according to the Mirror. As police began using batons and tackling people to the ground, protesters started chanting “Who’s side are you on?” with people pointing out that the police force had been on the receiving end of some of the worst austerity-based cuts in the past few years.

One person caused controversy by spray-painting a World War II memorial with “Fuck Tory Scum”. However, once protesters noticed the graffiti, a group of women held hands in front of the statue in order to disassociate it from the message of the event.

“People think we live in a democracy, which is laughable,” said one boy in a mask, who wished to remain anonymous. “It’s not a democracy when most newspapers are owned by the right wing establishment, who lie to the public in order to suit themselves. Newspapers don’t write about the bankers that are responsible for the financial crisis. Instead, they use benefit scroungers or immigrants as scapegoats, and readers believe it’s their fault they’re so poor so they don’t look to the government. It’s a clever form of social control, but we’re not stupid. Today’s turnout out is really quite heartening.”

As the sun set on Westminster, tired protesters began to disperse, ambling home or sitting on the grass to drink cider and listen to music. One policeman stood on his own, dramatically ripping up an anti-Tory sign and somebody fell asleep outside Downing Street in a balaclava. While the dust settled, there was a distinct feeling that this post-election protest marked just one many at the start of a long, hot summer.