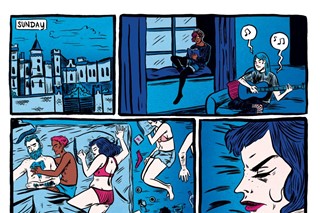 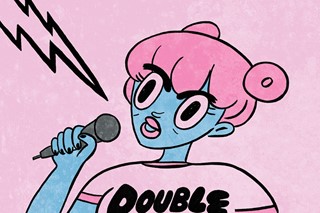 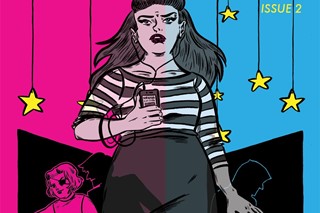 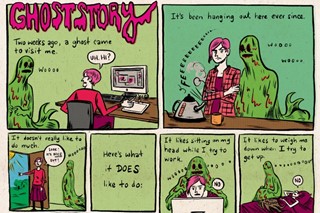 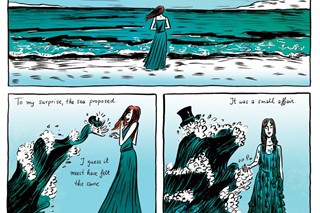 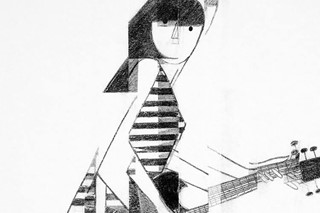 Julia Scheele is an illustrator, comics artist and the founder of new feminist zine collective One Beat Zines. The collective’s first publication was Double Dare Ya, a Riot Grrrl-themed anthology released in November. Since then, Scheele and her co-founder Sarah Broadhurst have edited Not A New Wave: A Sleater-Kinney Fanzine, offered advice to novice ziners and distributed a bunch of excellent zines (our favourite: Broadhurst’s (“Male Tears: Or, Rewatching Dawson’s Creek”).

We first came across Scheele in 2009, when she started the blog How Fucking Romantic, which invited artists to contribute illustrations to each of the tracks on The Magnetic Fields album 69 Love Songs. In some ways One Beat Zines feels like a feminist, offline version of this project: smart, diverse and collaborative, with a sly sense of humour. We spoke to Scheele about Riot Grrrl, zine culture and working with others.

Looking at One Beat Zines, and at your own work, it’s clear that music is a big influence on you. What bands or artists are inspiring you particularly at the moment?

Julia Scheele: Sleater-Kinney! I only started listening to them properly three years ago, and then I got obsessed. When they played in the UK last year I saw them three times. It’s amazing how honed their skills are – and also amazing to see women up on stage being that badass, being so into politics and having such self-confidence as feminists – and at the same time being a really awesome rock band. When I was a teenager I listened to a lot of dude bands, and I read a lot of dude books and dude comics. I knew that I wanted to make all that stuff too, but those scenes can feel a bit lonely if you’re a girl. So it was great to see teenage girls at the Sleater-Kinney concerts, knowing every lyric, being down at the front, not letting guys shove them out the way.

Your work is very collaborative, either with writers or with other artists. What makes you work in this way?

Julia Scheele: I think at first it was to get over a fear of making things. If I’m doing both the drawing and the writing for something, it becomes a really slow process. If you collaborate with someone, you feel like you have to get it done, otherwise you’d be letting the other person down. I’m just trying to trick myself into producing as much stuff as possible.

“When I was a teenager I listened to a lot of dude bands, and I read a lot of dude books and dude comics. I knew that I wanted to make all that stuff too, but those scenes can feel a bit lonely if you’re a girl” – Julia Scheele

A lot of life is tricking yourself into doing what you secretly want to do but what for some reason feels difficult or scary...

Julia Scheele: Exactly. It is quite scary, especially if you’re just starting out. That was one of the reasons why we founded One Beat Zines. I had a lot of people coming up to me and asking me how to get started. At first I didn’t understand: 'what do you mean, how do you get started? You just draw something and print it!' And then I realised not everyone knows how to do this.

How did you come up with the idea for Double Dare Ya?

Julia Scheele: I noticed that lot of people were talking about Riot Grrrl again and getting back into it. Then The Punk Singer (documentary about Bikini Kill frontwoman Kathleen Hanna) came out, and when I watched it I had a big emotional reaction. It was so rousing, and I remembered feeling the same way when I was a teenager, listening to Bikini Kill and Le Tigre for the first time. I thought it would be cool to put together an anthology about Riot Grrrl, and I realised that I already knew so many girls – and boys – who would be really into the idea, because they love Riot Grrrl as a movement and the music that comes from it. And because Riot Grrrl had such a huge DIY zine element to it, an anthology felt like an interesting way to approach it. So I asked a few people if they’d like to be involved and they said yes – and then it grew!

It’s exciting to look through the anthology, and to look at One Beat Zines, and see that Riot Grrrl can take new forms – that it isn’t just something in the past.

Julia Scheele: That was really important to us. Because Double Dare Ya became much bigger than I expected, I asked Sarah (Broadhurst) to co-edit, and when we were talking about what we wanted the anthology to be, we realised we really didn’t want a nostalgic look back through rose-tinted glasses. It was important for us to talk about Riot Grrrl in a present context as well, and to talk about its failures as a movement – not just to produce a pastiche zine.

When you mention its failures, are you thinking about issues of race?

Julia Scheele: Yes. In Sara Marcus’s book Girls to the Front, she writes about women of colour feeling uncomfortable being part of the movement because it was so white. When they tried to talk about race at chapter meetings, a lot of the white riot grrrls didn’t want to accept that women of colour had different experiences, and that being a white woman might mean that they too were oppressors, not just oppressed. I was too clueless as a teenager to notice how white Riot Grrrl was, but when I watched The Punk Singer it really jumped out.

How does zine-making differ from other forms of political art? What can it do that other forms can’t?

Julia Scheele: Zine-making is so personal. There’s a bit in The Punk Singer where Kathleen Hanna talks about making the Julie Ruin album. She was thinking about girls making things for themselves in their bedrooms, and she wanted Julie Ruin to be something that had that kind of feel to it, but that could reach more people. It’s difficult to reproduce that feeling in something that’s not a handmade pamphlet – something really personal that you make in an evening. There’s an energy to that – and because you’re doing it by yourself, it’s unedited, it’s rough around the edges and it has little mistakes. I like those mistakes, because it feels like you’re talking to someone more directly.

Tell us about some of the artists you’ve worked with through One Beat Zines...

Julia Scheele: Hanuka Lohrengel is an illustrator living in Riga, and she sent us a comic (“Sea World 2.0”) about a mermaid getting edged out of her home because of pollution, and selling drugs to get by. Hanuka had never made a zine before, so we gave her a few pointers about how to turn her comic into one. Then we met Jordana Globerman at Thought Bubble, and now we’re distributing a zine she made with two other artists, Marja de Sanctis and Hannah Prebble. It’s called Pink Spex and it’s about sexuality seen through women’s eyes. It’s incredibly rude and dirty, and it’s amazing.

What’s next for One Beat Zines?

Julia Scheele: Our plan is to do a big anthology like Double Dare Ya every year, in time for Thought Bubble in November. We’re still trying to decide on the theme for the next one. Then we’ll put out something smaller, like the Sleater-Kinney zine, and we’re thinking of asking a couple of people if they’d like to edit their own anthology for us – maybe based around photography or poetry. Aside from that, we’ll go to as many zine fairs as possible. We have some planned in London over the next month, and then we’re hoping to travel more widely. The DIY and punk scenes seem even stronger outside London, so we’re excited to be a part of that.